You Can Shove Your Wars! 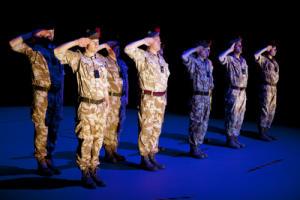 The play, which ran in San Francisco from May 9th to June 16th, had an all-male ensemble of 10 actors who portrayed the stories and sentiments of many of the soldiers in the much-lauded, 300-year-old Scots Highland Regiment known as “The Black Watch.” The script, by writer Gregory Burke, was faithfully based on his months of interviews – in, yes, pubs – with former Black Watch troops who had completed two tours of duty in Iraq (2003 & 2004) and one in Afghanistan (2009)
Subscribe to Fallujah