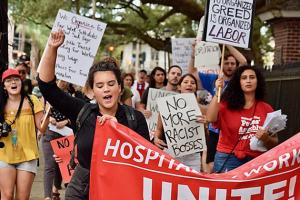 In an echo of national worker's rights movements such as Fight for $15 and OUR Walmart, New Orleans hospitality workers are coming together in an attempt to rearrange the building blocks of their industry. Both on their own and with the support of a union, workers are becoming their own advocates, in an effort to — as Marlene Patrick-Cooper, the local organizing director for the UNITE HERE union, often says — "turn poverty jobs into middle-class jobs."
Subscribe to hospitality workers