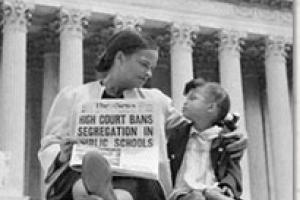 The Brown decision annihilated the “separate but equal” rule, previously sanctioned by the Supreme Court in 1896, that permitted states and school districts to designate some schools “whites-only” and others “Negroes-only.” But Brown was unsuccessful in its purported mission—to undo the school segregation that persists as a central feature of American public education today.
March 25, 2013

'Return' of the Class Struggle