Jeju Island - A Pivot on the Peace Island 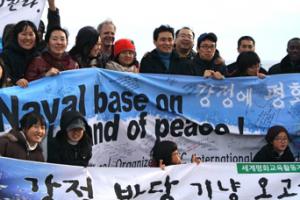 Since 2007, activists have risked arrests, imprisonment, heavy fines and massive police force to resist the desecration caused as mega-corporations like Samsung and Daelim to build a base to accommodate U.S. nuclear-powered aircraft carriers and submarines for their missions throughout Asia. The base fits the regional needs of the U.S. for a maritime military outpost that would enable it to continue developing its Asia Pivot strategy.
Subscribe to Jeju Island