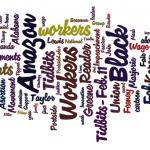 Special Edition: The Future of Abortion (Rewire News Group)
Everything You Ever Wanted to Know About Our January Medicare for All (M4A) Strategy Conference (Labor Campaign for Single Payer) 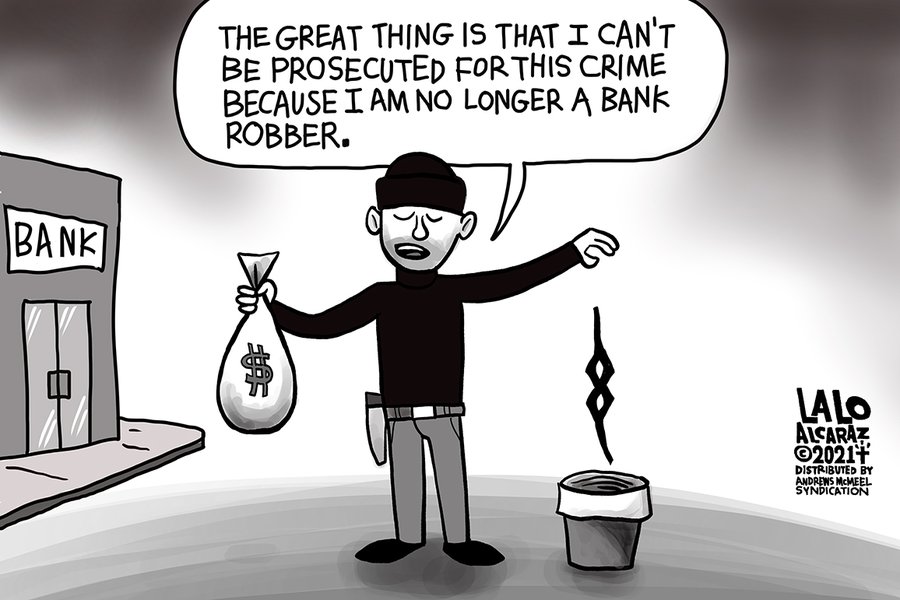 Re: What Trump’s Prosecution Omits

Great summary. We get in-depth analysis of American politics in Australia [yet] find it hard to understand the stupidity of the other side! 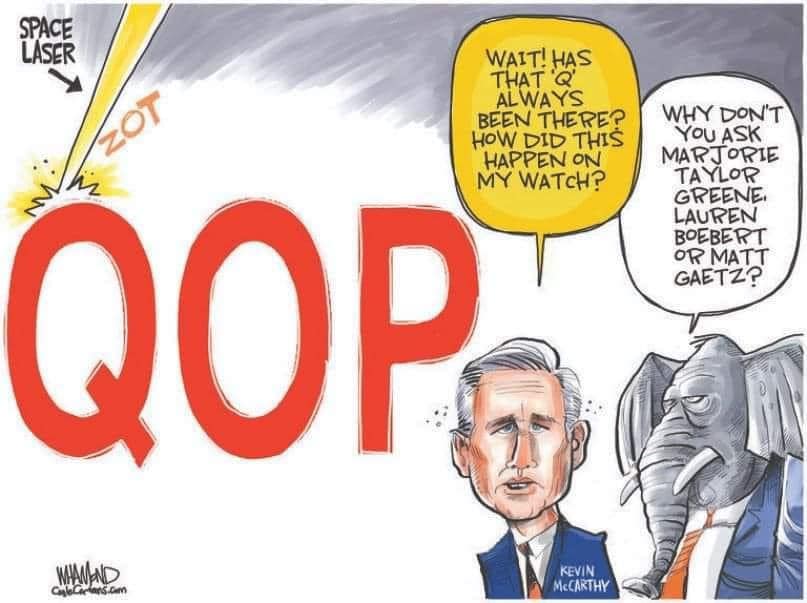 Re: Marjorie Taylor Greene Gets Punished by House and Disavows QAnon 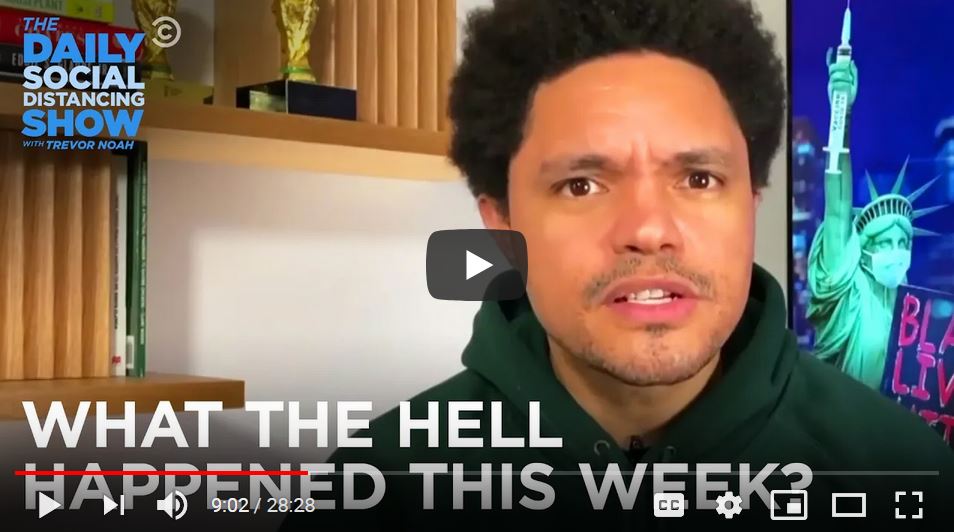 Re: Movie at the Ellipse: A Study in Fascist Propaganda

This is quite sophisticated fascist propaganda. A must see.

This is an analysis steeped in philosophical idealism rather than a dialectical-materialist point of view. GThe realities of political economy should come first: the  increasingly military appropriation of capital by specific social forces. The ideological flourishes are worked out and improvised as the fascist force competes for power.

Aiming first at mythology and deploying analogies like that used here -- e.g., of a woman debasing herself before a beloved abuser -- betrays a frame of mind captivated by petty-bourgeois fantasies. 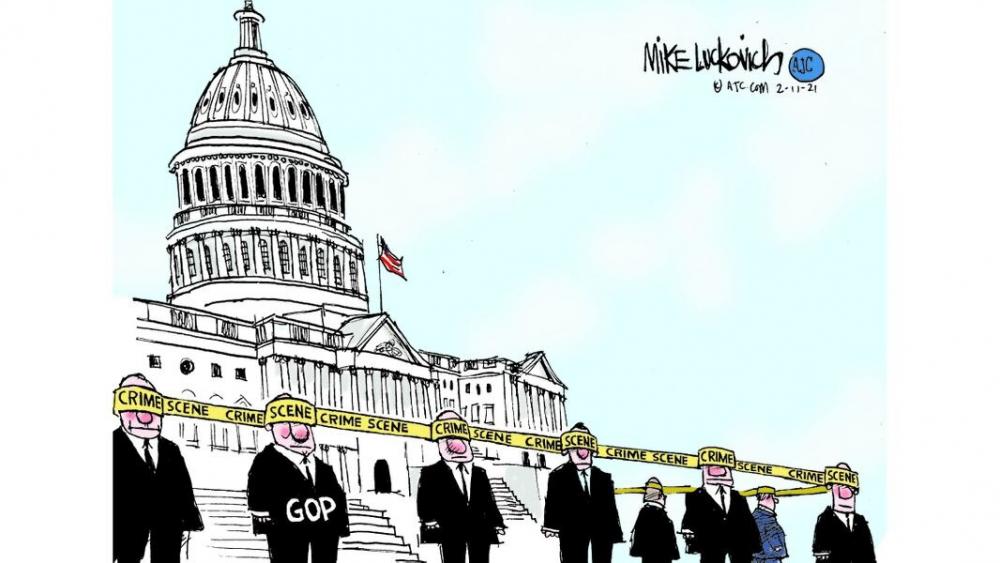 Re: Epidemic of Despair Could Haunt America Long After COVID

Researchers worry the pandemic may have severe after-effects, with deaths of despair impacting more distressed and newly-vulnerable populations. Only a serious reform of American capitalism can address the kind of distress and insecurity so severe that it kills.

Re: Slave-built Infrastructure and Reparations

Recognizing that enslaved men, women and children built many of the cities, rail lines and ports that fuel the American economy is a necessary part of any accounting for the legacy of slavery.

Nearly our entire initial infrastructure was built by the ancestors of POC that were enslaved.

Re: Union Solidarity on Eve of Historic Amazon Warehouse Election

Solidarity with Amazon workers in Alabama!

Re: Investors Tell Amazon to Stop Interfering in Union Vote

Best way to tell Amazon to stop interfering in union votes? Do no business with Amazon. And bring back an NLRB with teeth. And repeal Taft-Hartley.

Re: The Real Winners of Pandemic Super Bowl 2021

“On the eve of the big game, and after 10-plus months of the pandemic, 64 billionaire owners of major league sports franchises—including the AFC champion Kansas City Chiefs’ Hunt family and the NFC champion Tampa Bay Buccaneers’ Glazer family—have enjoyed a $98.5 billion rise in their collective net worth, a 30 percent increase, even as millions of fans have fallen ill, lost jobs, neared eviction, gone hungry and died due to the coronavirus.”

A giant among us, Karen Jennings Lewis has died. Her genius for creating unity among teachers, parents and Chicago residents propelled her first to the head of the Chicago Teachers Union (AFT Local 1) and into the maelstrom of Chicago and Illinois progressive politics. Her successes were the harbinger of the newly reinvigorated teacher movements across the US. Remember her work.

Well between Covid and pneumonia, Anne Feeney died. I loved her raucous good humor, her musicality and her commitment to social justice. Some of her songs in the comments. My condolences and best wishes to her family friends followers and fans. We have to hold up the blood-stained banner, we have to hold it up until we die.

I hadn't seen Anne for years, but I knew her in People's Music Network, a relentless activist and a wonderful singer-songwriter... 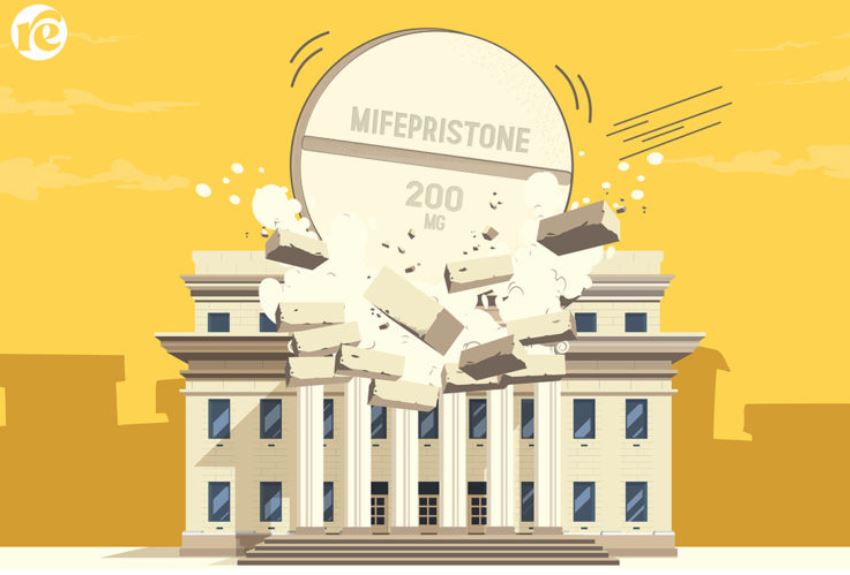 It certainly feels like we’re heading in a new direction, doesn’t it? With a new administration in office, the increasing availability of COVID-19 vaccines, and a revitalized push toward progressive issues, the months ahead seem likely to bring some long-overdue changes.

That’s certainly true when it comes to reproductive health. As we detail in our first special edition of 2021, The Future of Abortion, the time is now for rewriting the rules of abortion access and care. And thanks to a potent mix of medical innovation and patient ingenuity, our multistory, multiplatform package reveals that abortion care is slowly being wrested from the hands of those who seek to politicize it, placing decision-making back where it belongs: in the hands of pregnant people and their doctors.

There are some exciting abortion breakthroughs happening on the international front as well—and in a March 4th Rewire News Group event, we’ll be bringing together a virtual panel of activists leading the fight for abortion rights in Africa, Asia, and Latin America. It’s sure to be an inspiring discussion about what it will take for abortion to be seen as good medicine all over the world, and we’ll be sending you an exclusive invite soon, so keep an eye out!

There’s no doubt that 2021 is going to be a big year for abortion access, and we’re glad to have you supporting our journalism. 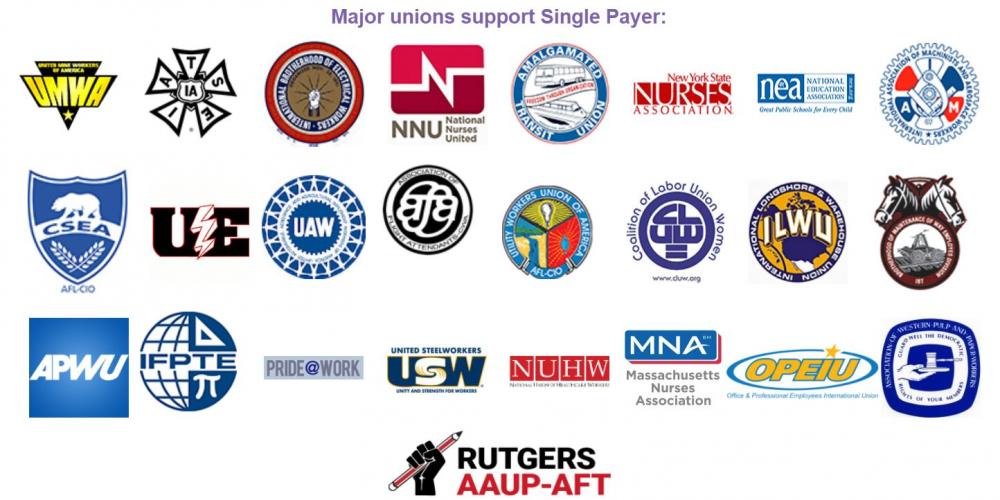 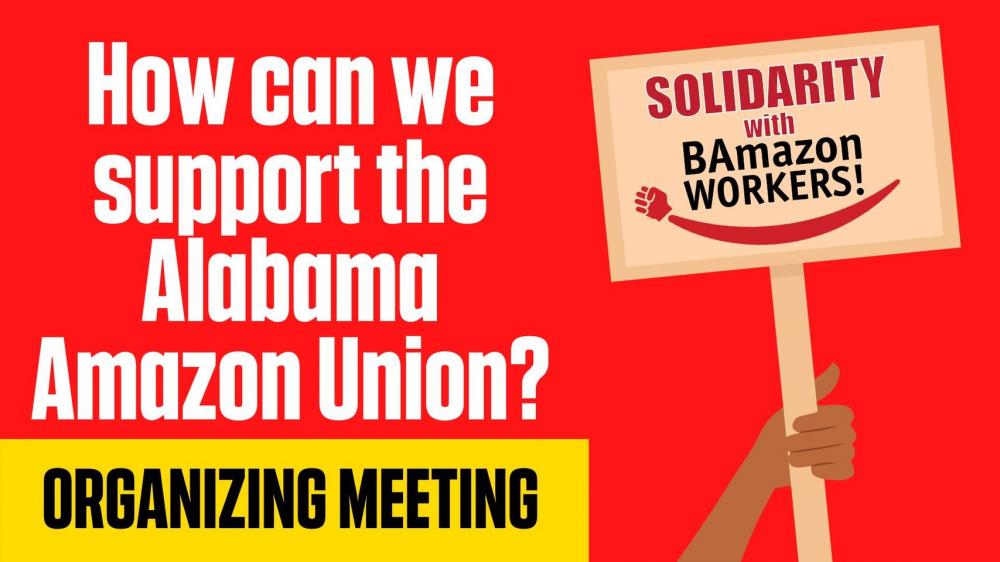 Between Feb 8, and March 29, approximately 6,000 Amazon workers at a warehouse in Bessemer, Alabama will begin voting by mail on whether to be represented by the Retail, Wholesale Department Store Workers Union. The harsh working conditions at Amazon warehouses, along with Amazon’s refusal to adopt measures that protect workers from COVID 19, have pushed Amazon and Whole Foods workers every- where to step up organizing and fighting back.

These predominantly Black Amazon workers, who have in recent months formed the BAmazon Workers Union, are on the cusp of launching a history-changing workers organization against one of the biggest and most powerful transnational corporations in the world, and its super rich union busting owner, Jeff Bezos.  In addition, these workers are standing up to the racist, anti-union laws that suppress labor across the south. No matter what the outcome of the vote, this fight for a union in Alabama is already rocking Wall Street and energizing a much needed national explosion of worker organizing.

On this virtual organizing meeting, we will hear important updates on this campaign and we will discuss how a campaign of mass solidarity can be organized during the seven week long voting period for the union in Bessemer and beyond. Please register today and invite others! 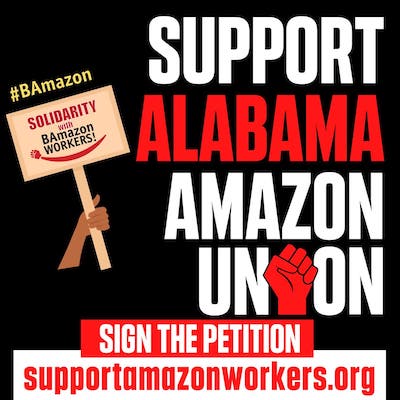 The future is Black, trans, gender non-conforming, queer, and beyond all the binaries and boundaries that oppression tries to box us into. Across all we do, and during Black Futures Month, we center Black, queer, and transfeminist perspectives.

Join us this week to dream and manifest our TGNCI futures—a beautiful one in which all Black people thrive, shine, and love, free from violence, harm, and hate.

Get on Clubhouse with us this Friday, February 12 at 8pm ET for an exclusive gathering with B. Cole, Texas Isaiah, Tunde Olanarin, Niv Acosta, Sasha Alexander, and Olympia Perez.

These and other Black queer, trans, gender non-conforming and intersex actvists, storytellers, writers, artists, and community leaders will discuss what a world looks like that centers Black, queer, and transfeminist lives.

Black queer and trans artists, activists, working people, and others have always been at the forefront of dreaming and expanding what is possible for our movements. So we affirm, celebrate, and defend all Black lives.

There are multiple ways to tap into our TGNCI futures this week. Don’t miss M4BL on Twitter, Instagram, and Facebook. We’ll be featuring the movement impact, stories, and creations of Black TGNCI visionaries. And we will revisit last summer’s Black National Convention to hear from TGNCI artists and activists who dropped knowledge and political education we can all learn from.

Join us throughout the week on social and on Clubhouse this Friday at 8pm ET to connect with the brilliance of Black queer, trans, gender non-conforming artists and activists leading us into our futures.

February 13 (ahem… 2.13!) is our annual National Day of Action to bring awareness to the fact that the federal sub-minimum wage for tipped workers is just $2.13 an hour. This year, we are so honored to be joined by celebrities who were servers, plus current servers and star chefs for #NationalTippedWorkerDay.

We will be hearing what it’s like to work in the industry from current service industry workers and from celebrities who’ve had the experience of trying to live off tips. This is more important than ever.  The Raise The Wage Act — which includes a $15 federal minimum wage and full elimination of the sub-minimum wage for tipped workers, differently abled workers, and youth — has a real chance at becoming law.  It’s currently in President Biden’s pandemic relief package and is an integral step in pulling working people out of poverty and jumpstarting economic recovery.   You might want to check out this USA Today essay, featuring One Fair Wage members talking about the racism and sexism of the subminimum wage.

We hope you can join us on Saturday 2.13 at 11:00am PST / 2:00pm EST to hang out with the stars while celebrating the real stars of this pandemic, the service workers keeping us nurtured and fed.  And lend your voice to the fight for fair wages, dignity and respect for the essential workers who put food on our table.

The One Fair Wage team 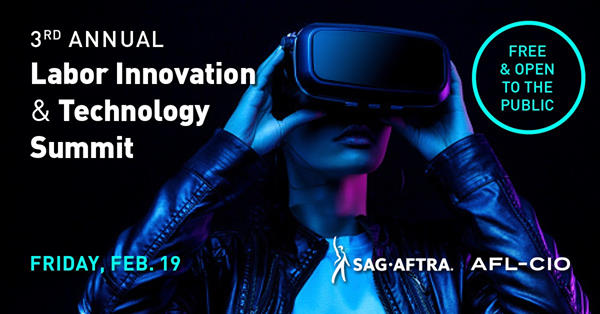 Hosted by: SAG-AFTRA and AFL-CIO

SAG-AFTRA's 3rd Annual Labor Innovation & Technology Summit to be held virtually on Friday, February 19 in partnership with the AFL-CIO. This full-day event is free and open to the public.

An all-digital event that brings together leaders from across the labor, entertainment, and technology sectors to discuss
the future of work.

This year’s Summit will include discussions with key industry leaders & influencers on:

For info on keynote addresses, sessions and panels please visit our website.