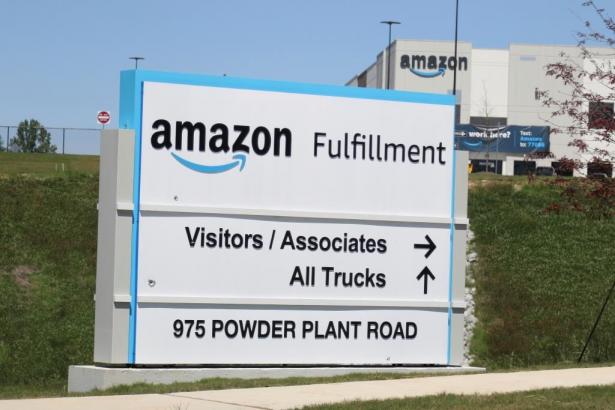 BESSEMER, ALABAMA – On Saturday, February 6, two days before the start of a decisive unionization vote, representatives from various unions across the country and Amazon employees gathered in the rain on a green field. Despite the weather, they made a show of unity with the Retail, Wholesale and Department Store Union (RWDSU), which is leading a unionizing campaign to represent about 5,800 workers who toil in Amazon’s enormous warehouse.

A day earlier, the National Labor Relations Board (NLRB) ruled that RWDSU’s union ballots can be mailed out on Monday, February 8, rejecting Amazon’s objections and calls for an in-person vote. Leading up to the vote, Amazon has thrown all its might behind efforts to throttle the union election. Now, with the NLRB’s decision clearing the way, RWDSU and a united labor movement are pushing ahead in the hope of coming out victorious against Amazon.

Amid fluttering American flags and the sweet sounds of favorites on the union rally playlist like Irving Berlin’s “God Bless America” and Montell Jordan’s “This Is How We Do It,” RWDSU organizers busied themselves plunking yard signs into the muddy earth: Vote Union Yes. Don’t Back Down. Remember Mail Your Yes Ballot.

The RWDSU’s leading campaign organizer, Joshua Brewer, spoke with passion and determination. Holding a microphone in one hand and a coffee cup on the other, he highlighted the obstacles they’ve braved to get to this point, not least the rain showering down on him.

“We started with a dozen workers in Bessemer, and we grew to thousands. And it happened fast, and it happened because of people like you who supported them,” Brewer said.

“This could be the difference between Amazon being what it is, corporate greed, and a provider of working-class jobs,” says Thomas Morrissey of Teamsters Local 25, who came down from Boston for the rally.

Last month, Morrissey, a trainer for drivers of tractor trailers, joined his fellow Local 25 members at the Hunts Point Produce Market picket line in the Bronx. The Hunts Point strike, at the largest food wholesaler in the world, was about specific demands for higher wages and better benefits, and it ended with workers winning their largest pay raise in decades. By contrast, successfully forming a union at an Amazon warehouse, Morrissey says, would be a “spark” that “could literally take off across the country.”

Morrissey says he makes these trips to create the kind of world he wants his kids to live in. Tears welling in his eyes, he tells me, “Sending pictures to my son down here in the rain is a big deal.”

Amazon workers from other states joined the rally too. “We can only be as good as how we treat our lowest-paid workers,” says Zach, an Amazon driver from Louisiana. He lost his previous job due to the pandemic and has been on Amazon’s payroll since August of 2020. He earns $15.50 hourly and works an average of 30 hours a week.

Amazon “kind of benefited from the capture of lots of people losing their jobs and being desperate for income,” said Zach. “I’m so used to people telling me that it’s impossible to form a union in the South. It’s impossible to form a union in Louisiana. But these guys are fighting, and if they can win this union here in Alabama, it means much better things for workers throughout the South.”

Mail-in ballots began to go out on Monday to an estimated 5,800 members of the bargaining unit. Brewer says many of these workers come from union households, where their relatives are beseeching them to vote yes for the union.

“This is a union town,” said Brewer of Bessemer, located just outside of Birmingham, Alabama’s biggest city. “It’s long been a union town. It’s gonna continue to be a union town.” Alabama has one of the highest union densities in the South, with an estimated 180,000 unionized workers, about 8 percent of the workforce. While quite low historically, that’s higher than in neighboring states like Georgia and Tennessee.

Bessemer is a small industrial city of 27,000 residents founded in 1887 by coal magnate Henry DeBardeleben and nicknamed “The Marvel City,” described on the town’s website as an “economic engine driving development in the Birmingham-Hoover Metropolitan area.”

“If you dig deep into Alabama’s history, it has such a strong union history with the steelworkers,” said Jason Kobielus, co-chair of Birmingham Democratic Socialists of America (DSA). “Unions are standing up for things that are bigger than them.”

Sen. Bernie Sanders: “It cannot be overstated how powerful it will be if Amazon workers in Alabama vote to form a union.”

In the 1930s, Birmingham’s Mine Mill union went on strike against steel companies over union recognition, including Tennessee Coal and Iron (TCI), one of the biggest steel companies of its time, and incubator of the Jefferson County Ku Klux Klan. Mine Mill represented a multiracial workforce of iron ore miners that was about 80 percent African American. Mine Mill’s president was white, while its vice president was Black. The multiracial union inspired future generations of civil rights leaders and workers, as it served up a radical example of militancy and chutzpah.

Armed with the knowledge of these past struggles, members of the St. Louis and Birmingham chapters of DSA have been supporting the Amazon workers since the organizing campaign began in October. They turned out for the rally clad in signature red sweaters and holding handmade signs with the emblem of the rose.

Amazon has been working to discourage workers from joining the union. Early on Saturday, I saw a woman in her early twenties filling up her car at a nearby gas station while wearing a lanyard with an Amazon pin, showing a smiling face spelling out “VOTE NO” in white letters against a red background. She says, “Amazon put it on us.” All newly hired workers got the pin when they started on the job, says the woman.

She’s only been at the Bessemer warehouse for a month and tells me that she loves it in comparison to her last job at Walmart. Even though she’s not included in the bargaining unit for the upcoming election, she’s attended the company’s mandatory “captive audience” meetings, where she says Amazon “educates” workers with anti-union messages.

“If it’s anything that can help us, I’m for it,” says another worker when asked about the union. She’s been on the job for over six months, so she is eligible to vote. Before Amazon, she worked as a production operator at a non-union auto plant. Amazon is telling her to vote no and that the workers “can do it without dues,” she says, referring to the name of Amazon’s union-busting website. But she’s also spoken with a friend’s husband who has a union job that provides retirement benefits and health insurance. Through Amazon, she has a 401(k) and health insurance. But she says, the union has “kinda some positive stuff.”

Jennifer Bates, a union supporter, has been at Amazon since May 2020. She started as a stower, someone who packs and sorts bins of various sizes for delivery, but is now a “learning ambassador,” Amazon’s term for a trainer. Bates says one of her trainees was so excited about the union that she tried to sign up her father, a former union worker.

“Well, honey, you can’t sign your father up because he don’t work here,” Bates told the trainee.

Other workers, Bates says, went home and asked their parents about signing a union card. One parent, Bates says, answered, “Sign that card, honey, and take it back down there, you need it.”

“I believe we will make history,” she adds.

As the rally neared its end, people wearing hats and heavy coats milled about in the cold, biting wind, their masks wet and loose on their faces, their shoes sinking into the dried grass turned to mud, umbrellas raised to the gray skies.

People were still whispering about how Sen. Bernie Sanders (I-VT) sent union supporters and workers 40 pizzas earlier in the day. Later that night, Sanders tweeted his support: “It cannot be overstated how powerful it will be if Amazon workers in Alabama vote to form a union. They are taking on powerful anti-union forces in a strong anti-union state, but their victory will benefit every worker in America.”

Sanders’s words—“their victory will benefit every worker in America”—catch a theme of the rally, the idea that labor unions provide generational stewardship for future workers. Randy Hadley, president of the RWDSU’s Mid-South Council, tells the crowd of the precedent a unionized Amazon would set.

“Let’s make a difference in our future,” Hadley says. “Our children, our grandchildren are going to end up working one day at a place like Amazon, and we need to fix it and make it better.”