The investors calling for Amazon to cease pushing back on the unionization efforts collectively hold more than $20 billion worth of the company's shares. 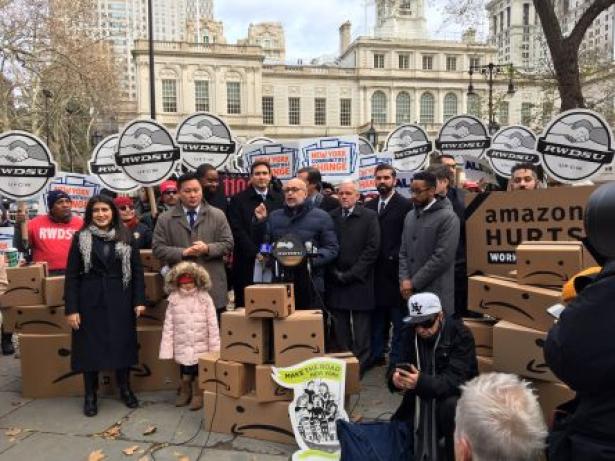 Stuart Appelbaum, president of the Retail, Wholesale and Department Store Union, speaks a a news conference in New York City, where the union unveiled a report called, "What's Wrong with Amazon.", rwdsu.info

A group of more than 70 Amazon investors is telling the company to stop interfering with a unionization vote in Alabama, according to a report from the Financial Times.

Nearly 6,000 workers at an Alabama warehouse are voting on whether to form a union, the first in the history of Amazon, which has long been staunchly opposed to its employees unionizing. The workers were due to receive their ballots on Monday as part of a mail-in election and have until March 29 to place their vote.

The investors calling for Amazon to cease pushing back on the unionization efforts collectively hold more than $20 billion worth of the company's shares, the FT notes. The group includes the comptrollers for the state of New York as well as New York City, BMO Global Asset Management, the Church of England Pensions Board, and Sweden-based Folksam and Ohman Fonder, per the report.

In a letter, the investors reportedly pointed to Amazon's stated "human rights principles," which include statements on respecting workers' rights to join and form or not to join a labor union "without fear of reprisal, intimidation, or harassment."

"As these workers seek to organize with [the union] for health, safety, and protection, Amazon's investors are watching," New York City comptroller Scott Stringer said, according to the FT. "There is power in their unity and power in labour, and they have my full support as they fight for a safe, fair workplace."

Amazon did not immediately respond to Insider's request for comment.

Amazon has a history of working against employee efforts to form a union. Last week, the Washington Post reported that Amazon had posted anti-union messaging in the bathrooms of its Bessemer, Alabama, warehouse, the facility whose employees have begun voting on unionizing.

"Where will your dues go," a sign read on the back of a stall door according to The Post, referring to union fees.

The company listed before quickly removing a job opening in 2020 for an analyst that would monitor worker activities around organizing.

Amazon has also used a tool to monitor dozens of private and public social media groups to find drivers that were organizing protests or strikes, per a Motherboard report from September. And in November, reports surfaced that Amazon had hired detectives with the infamous Pinkerton spy agency to monitor European workers' labor union organizing efforts.