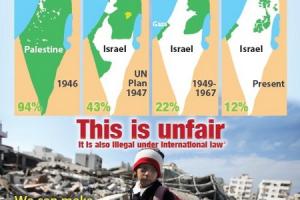 The Toronto Transit Commission (TTC) has rejected a group's bus ad showing Israel's expropriation of Palestinian land over time, claiming the ad could incite anti-Jewish discrimination and violence. The centerpiece is a series of four maps that show the loss of control of Palestinian land to the Zionist movement and Israel between 1946 and the present. The ad also states: “This is unfair. It is also illegal under international law.”
Subscribe to Toronto Transit Ad