How Teachers Unions Lead the Way to Better Schools

Diane Ravitch upends the "bad teachers" narrative...The stakes for our country could not be more profound. The labor movement and the public education system are two critical institutions of American democracy. And they are two that go hand in hand. Teachers unions have played a critical role in advocating for public education, but you'd never know it from mainstream media coverage - there is a great need to lift up this tradition. 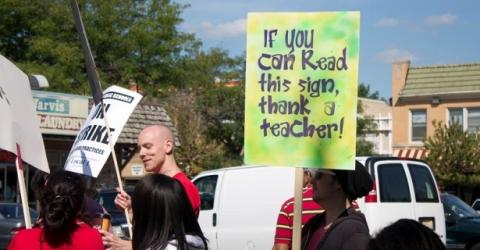 Contrary to mainstream wisdom, poverty and inequality cause failing schools, not teachers unions and the teachers themselves., Brad Perkins/ Flickr / Creative Commons

I have a concern: Teachers are getting pummeled. Too often, they are being demonized in the media and blamed by politicians for being the cause of bad schools. Right-wing governors, power-hungry mayors and corporate "reformers" - all ignoring root issues such as poverty and inequality - have scapegoated the people who have devoted their lives to educating our children. Moreover, these forces are seeking to destroy the collective organizations formed by educators: teachers unions.