The Arab democratic uprisings were world-historic, yet their outcome remains uncertain. It is premature to conclude that the rise of the Islamists is necessarily a permanent feature of the politics of these countries. There are, however, certain points to note as we reflect on the results of these uprisings and the road forward. 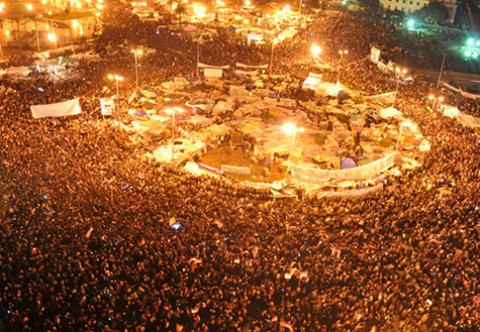 The Arab Spring is not over yet., The Women and Memory Forum - http://www.wmf.org.eg/
A friend recently told me how a relative of theirs was most concerned about developments in Egypt, given the dominance of the right-wing Islamist Muslim Brotherhood. I have heard similar such concerns raised, as conservative Islamists have come to play major roles in post-uprising governments, e.g., Tunisia, Egypt. In some cases, there is an implication in such concerns that it might have been better to have left things as they were with authoritarian regimes in place to block the Islamists.
The Arab democratic uprisings were world-historic, yet their outcome remains uncertain. It is premature to conclude that the rise of the Islamists is necessarily a permanent feature of the politics of these countries. There are, however, certain points to note as we reflect on the results of these uprisings and the road forward.
First, it is fair to say that the so-called Arab Spring represented an accumulation of anti- authoritarian/anti-neo-liberal uprisings. They were not revolutions in the sense of fundamental socio- economic change, but they were popular uprisings that brought down or challenged tyrannical regimes, regimes that had either been client states of the West or, in the case of Syria and Libya, held a more ambiguous international role. In that sense, these uprisings set the stage for the possibilities of something deeper and more long-lasting.
Second, while Tunisia and Egypt carried out largely non-violent uprisings that were successful in bringing down tyrannies, the movement in Bahrain, though quite massive, was successfully divided by the regime using Sunni/Shiite contradictions along with vicious repression. This repression, by the way, was actively supported by Saudi Arabia and the complicity of the USA. In Yemen, the movement stalled and, with the activism of the Al Qaeda affiliate, was not only divided, but disorganized and ignored by the West (except, of course, for the continuous US drone assaults against alleged Al Qaeda targets). In Libya and Syria, as we know, the largely peaceful movements evolved into violent uprisings in the face of active repression by the governments. In the case of Libya, the peaceful uprising was hijacked by NATO, though there were many progressive forces in North Africa who critically supported the NATO intervention due to their hatred of Qaddafi. In Syria, the peaceful uprising now has the feature of a combination of a popular democratic revolt layered with a proxy war (of Iran vs. Saudi Arabia and their Arab/Persian Gulf allies).
Third, organization beats lack of organization. One of the reasons the right-wing Islamists have been able to succeed as well as they have is that they possess organization. It is important, however, to note that a very strange game existed between the right-wing Islamists and the authoritarian regimes. To the extent to which they helped to weaken or crush the political Left (the Sudan being an example of the latter), the Islamists were seen as acceptable allies by these authoritarian governments and their protectors in the USA. When the right-wing Islamists became too audacious, they were then perceived as a threat. In either case, they frequently had a public existence. Forces on the political Left, however, were subject to relentless persecution, weakening their ability to organize.
There is another side to this question of organization, however. In the midst of the massive demonstrations that shook many of these countries, e.g., Tahir Square in Cairo, it was easy for many protestors to believe that organization was not necessarily critical and that the sheer force of the masses would push through a more complete revolutionary process. Nothing could have been further from the truth.
The Arab democratic uprisings helped to set in motion popular upsurges in other parts of Africa, in Europe and the United States. However, they have yet to complete their mission. Whether they will do so or whether they will recede like a huge wave returning to the sea, only time will tell. In either case, the people of the Arab World demonstrated that a sensational challenge to the old order and its sponsors in the West could be undertaken. To go further will probably necessitate new social movements and levels of organization that recognize that the process of social transformation goes far beyond cultural and/or religious reaffirmation but must be one that engages the totality of the dispossessed in bringing into being a genuine emancipation.
[BlackCommentator.com Editorial Board member and Columnist, Bill Fletcher, Jr.,is a Senior Scholar with the Institute for Policy Studies,the immediate past president of Trans Africa Forum,and the author of "They're Bankrupting Us" - And Twenty Other Myths about Unions.He is also the co-author of Solidarity Divided: The Crisis in Organized Labor and a New Path toward Social Justice, which examines the crisis of organized labor in the USA.]