Krugman versus Stiglitz on Inequality and Economic Growth

Some interesting differing view points on the effect of income inequality -- either way it's really bad for everybody but the super rich. Check out both views - moderator. 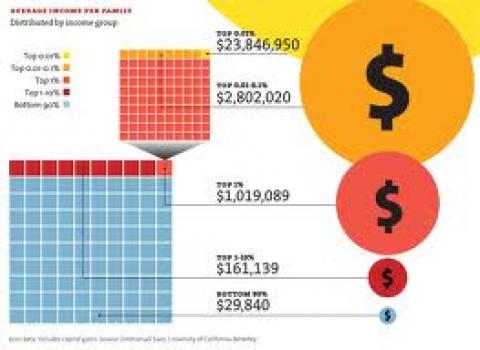 On the first point, Krugman correctly notes that the tax code is at least marginally progressive. This means that in general upward redistribution of income should increase revenues, the opposite of what Stiglitz claimed. It is possible that Stiglitz was considering the broader tax and transfer picture. This is certainly more ambiguous and could well go the other way.

Suppose we are redistributing 3 percentage points of income (roughly $400 billion a year) from the bottom 20 percent of the income distribution to the top 2 percent. While tax collections will almost certainly go up, we will likely be paying out more money in food stamps, TANF, Medicaid and other means-tested programs. My guess is the net in this story is negative, but I am sure it would depend on exactly who is being hit and who gets the money.

The more important point is whether we may suffer from a lack of consumption if we redistribute from low income people, who Stiglitz argues will spend most of their income, to rich people who he argues will spend a smaller share of their income. Krugman dismisses this assertion, noting the problem that consumption will depend on lifetime income, not temporary income. This would mean that people will always be spending a higher share of their income when their income is low than when it is high. He then turns to the macro picture to see if there is evidence of a rise in the savings rate as income shifted upwards in the last three decades.

The National Income data of course show a decline in savings, but there is a major complication in this story. The stock market began to rise above its historic average ratio to corporate profits in the 1980s and rose way above the historic ratio in the stock bubble in the 1990s. Also, in the 1990s house prices began to rise above their long-term trend level and in the last decade they rose way above their long-term trend.

We know that people spend based in part on their wealth. The increase in stock values relative to income in the 1980s meant that wealth was higher relative to income than would ordinarily be the case. We would expect this to lead to more consumption and a drop in savings. The same is true with the rise in house prices in the 1990s and 2000s. In other words, we did not have a problem of under-consumption because we had bubbles in the stock and housing markets that kept consumption at very high levels.

Does this prove Stiglitz's point? I wouldn't go quite that far, but it does suggest that Krugman's case is not as solid as it may first appear.

The other item to keep in mind is that we are not supposed to be worried about insufficient demand in this story in part because the low interest rates that would result would cause the dollar to fall and net exports to rise. This happened a bit in the mid-90s in response to the deficit reduction of at the beginning of the Clinton administration. However things went the other way following Robert Rubin's high dollar policy and the East Asian financial crisis.

This is a longer story, but in the textbook story rich countries like the United States are supposed to be net exporters, sending capital to poor countries. The fact that we have seen the opposite in a big way for the last 15 years is not good.

Seth Ackerman reminds me that comparisons of saving rates only make sense when the economy is near full employment. Otherwise the saving rate will be inflated by virtual of the fact that income is depressed lowering the denominator. The full employment assumption is plausible for the late 80s, mid and late 90s, and near the peak of 00s cycle. It is less plausible for the early and mid 80s, early 90s, and early part of the last decade. Of course for comparison purposes, we would have the same issue with the 70s downturn.