When the U.S. Court of Appeals in Washington ruled Friday to overturn President Obama's recess appointments to the National Labor Relations Board, it handed a huge gift to Wall Street, big corporations and the politicians they control. 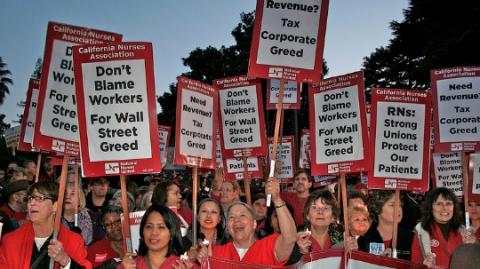 , National Nurses United
When the U.S. Court of Appeals in Washington ruled Friday to
overturn President Obama's recess appointments to the
National Labor Relations Board, it handed a huge gift to Wall
Street, big corporations and the politicians they control.
In health care, the implications are especially insidious. It
is a clear assault on the ability of nurses to act
collectively to improve safety standards and public
protections for patients.
When the labor board is not dominated by corporate-oriented
appointees, as it has been most of the past four decades,
the game plan of the antiunion crowd is to bar the board
from operating, either by refusing to confirm appointees,
de-funding it or destabilizing it. That was what prompted
these recess appointments, made by President Obama only
after the Senate minority blocked confirmation of his
nominees needed to restore a quorum on the board to enable
it to function.
Without a quorum, which will now be the case again, workers
experience delays if they object to unfair discipline,
intimidation or harassment by employers, or attempt to form
a union to represent them. Only after the recess
appointments were made was the board able to enforce a
remedy on 2007 charges filed by the California Nurses
Association, along with a tall stack of other delayed
decisions. A final decision was issued just days ago
affirming the 2009 ruling that a rural Northern California
hospital had retaliated against nurses for legally protected
union activity. Now that decision, too, is in jeopardy.
That, of course, is the real intent of this court challenge,
the obstruction of the Senate in confirming presidential
appointees, and blatant attempts by the U.S. Chamber of
Commerce and the politicians they heavily influence, to gut
any semblance of federal protection for workers.
Labor law enacted in the 1930s helped sustain the growth of
unions that led to dramatic improvements in living standards
for all Americans in the 1950s and 1960s.
This court's decision is a further reminder that the labor
movement and all those who believe in workplace and
democratic rights need to step up our efforts to challenge
Wall Street, the chamber and the politicians it controls. We
need to get back in the streets, forcefully challenge those
who would deny our rights, and unite a broad movement to
press for participatory democracy and social change.
______________
RoseAnn DeMoro is executive director of National Nurses
United and the California Nurses Association.