Where did OWS come from? Who were the protesters? What motivated them to join this new movement? And why did the occupations gain such enormous traction with the media and the wider public? We investigated those questions through in-depth interviews and a representative survey. The Occupy movement has both a pre-history and an enduring impact. We are uncertain as to whether it marks the beginning of a new cycle of protest, but we disagree that it is a "flash" movement. 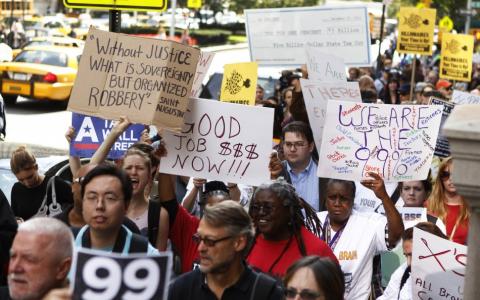 Occupy Wall Street moves uptown, Mediaite
Occupy Wall Street (OWS) suddenly burst into public view on September 17, 2011 when a group of about 2,000 protestors assembled in lower Manhattan and occupied a previously obscure “privately owned public space” called Zuccotti Park. Although the occupation initially attracted little attention, reports on it soon proliferated on the Internet and through social media, and after a week it made worldwide headlines. As word spread, similar occupations popped up across the United States and around the world. By mid-October demonstrations were underway or planned for 951 cities in 82 countries (Tedmanson 2011).
The Occupy phenomenon riveted the media and the public for the next two months, until November 15, when the New York Police Department (NYPD) forcibly evicted the inhabitants of Zuccotti Park, one in a wave of such evictions in cities across the country. OWS fragmented in the wake of the evictions, but has since reappeared in new arenas. It is still too early to assess its long-term impact, but at this writing, more than a year after the evictions, Occupy’s impact on political discourse and on participants themselves remains palpable.
Where did OWS come from? Who were the protesters? What motivated them to join this new movement? And why did the occupations gain such enormous traction with the media and the wider public? We investigated those questions through in-depth interviews with 25 core Occupy activists as well as a representative survey of 729 people who participated in an OWS-sponsored May 1, 2012 rally and march. Our research is confined to New York City, where the movement began and home to its main target: Wall Street. Although the dynamics of Occupy in other cities may differ in some respects, we hope that our analysis will contribute to understanding the larger Occupy movement in the United States.
One of our key findings is that the Occupy movement has both a pre-history and an enduring impact. We are uncertain as to whether it marks the beginning of a new cycle of protest in the United States, as some have argued (Piven 2012) but we disagree with those commentators who characterize it as an ephemeral “flash” movement (Plotke 2012). We view the history of OWS as an historical arc, with the Zuccotti Park occupation at its peak. As we detail below, it has legible roots in earlier social movements, and, post- occupation, the issues Occupy focused on and the distinctive form it assumed continue to affect the political landscape.
OWS was not a spontaneous movement that appeared out of nowhere. It was carefully planned by a group of experienced political activists, newly inspired by the Arab Spring and the surge of mass protest around the world in the first half of 2011. Although the OWS encampment in New York lasted only about two months, its impact, and that of the broader Occupy movement, continues to reverberate in at least three respects. First, although veteran activists were instrumental in planning the occupations, they also attracted numerous other participants who had little or no previous experience with political protest. Many of these individuals were deeply radicalized by their participation in Occupy and will likely continue on a life path that includes some type of progressive political activism.
Secondly, as many other commentators have noted, Occupy transformed U.S. political discourse. It elevated the issue of growing economic inequality to the center of public attention, and also highlighted the creators and beneficiaries of that inequality: “the 1%,” the wealthy elites whose interests were opposed to those of the other 99% of the population. To a degree unprecedented in recent public memory, social class became a central focus of political debate.
Thirdly, OWS networks survived the evictions and have resurfaced in a variety of different contexts. Occupy activists have been visible in recent New York City labor and community organizing efforts, and have also been active as “Occupy” in various contexts. Most notably, Occupy Sandy organized tens of thousands of relief workers in New York City in the wake of “Superstorm Sandy,” attracting a new wave of media attention. As Nathan Schneider (2012c) suggests, “Occupy After Occupy” has become “a productively subdivided movement of movements.”
For the full article, go here.