Mairead Corrigan Maguire, 1976 Nobel Peace Prize for her work for peace in Northern Ireland, calls for support for Julian Assange. His only crime is that he embarrassed the U.S. and other powerful governments with WikiLeaks' release of documents in which the U.S. military appear to have deliberately killed civilians. 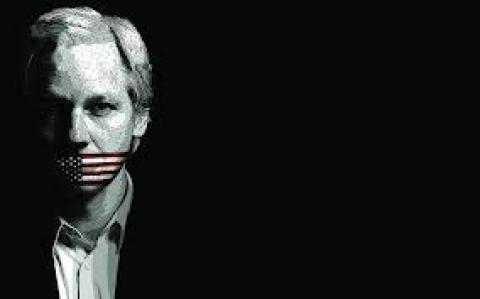 , Common Dreams
Last month, on December 13th, 2012, I visited Julian Assange, Australian founder and editor-in-chief of WikiLeaks, in the Ecuadorian embassy, in Knightsbridge, London.
It's been seven months now since Julian Assange entered the Ecuadorian embassy and was given political asylum. He entered the embassy after the British Courts shamefully refused his appeal against extradition to Sweden where he is wanted for questioning about sexual molestation (no criminal charges have been made against him). Julian Assange has said he is willing to answer questions in the U.K. relating to accusations against him, or alternatively, to go to Sweden, provided that the Swedish government guarantee he will not be extradited to the U.S. where plans are being made to try him for conspiracy to commit espionage. The Swedish Government refuses to give such assurances.
Mr. Assange is right to be concerned about the dangers of extradition to U.S. The American media has reported that the U.S. Justice Department and the Pentagon have been conducting a criminal investigation into "whether WikiLeaks founder Julian Assange violated criminal laws in the group's release of government documents, and should face charges under the espionage act."
Mr. Assange's only crime is that he embarrassed the U.S. and other powerful governments with WikiLeaks' release of thousands of U.S. state department cables and video footage of the 2007 incident with an apache helicopter in which the U.S. military appear to have deliberately killed civilians, including two Reuters employees. These revelations demonstrate crimes against humanity by the United States.
For this truth-telling, he has inherited the wrath of the U.S. government, and has been targeted in a most vindictive way - as has American soldier, Pt. Bradley Manning, currently undergoing a military Court hearing for allegedly leaking classified documents to WikiLeaks. Pt. Bradley Manning has been subjected, according to formal U.N. investigation, to "cruel and inhuman treatment" while being held in solitary confinement in a U.S. prison. In effect, the American government has admitted to the torture of Pt. Bradley Manning, one of their own soldiers.
However, even if the Swedish authorities decide not to charge Julian Assange, the U.S. will probably demand that the British government extradite Assange from Britain to the U.S., to face a Grand Jury indictment. (The U.S. Grand Jury has been sitting for 16 months and it is believed to have reached a verdict to indict Julian Assange and has a sealed indictment ready to unseal at the most beneficial time to the US. The U.S. Grand Jury system is a flawed, unjust legal process, consisting of four prosecutors with defense evidence is allowed. There is no judge and a jury pool is drawn from Alexandria, Virginia, which has the highest percentage of military contractor families in the U.S.)
When I met Julian Assange, I was struck by his bright, intelligent and compassionate mind, and glad to see that in spite of all the persecution and abuse of his human rights, he is in good spirits and good health. For seven months now, he has been confined indoors with no possibility of even five minutes outside in the fresh air, which is a basic right for all political prisoners. If he tried to go outside, he would be immediately arrested by the many British police outside the embassy, and extradited to Sweden or the U.S. (The cost to maintain this police force outside the Embassy is some o11,000 per day).
Unlike most political prisoners, he has no idea how long his virtual imprisonment in the embassy will last--6 more months or 6 years. The diplomatic standoff continues. This is indeed cruel, inhumane and mental torture. His only crime was to tell the truth and bring transparency to the illegal acts of the U.S. Government and its allies around the world.
I believe the U.K., Swedish and U.S. governments are all complicit in the mental torture of Julian Assange, and I appeal to the Australian government, human rights defenders, brave media, and people who love truth and freedom around the world to stand up for Julian Assange and his human rights, and the assurance that he get the chance to answer all accusations against him in the U.K. or Sweden without being extradited to U.S., where he could meet the same "cruel and inhuman treatment" as Pt. Bradley Manning has suffered.
The least we can do is raise our voices to protect Julian Assange--and Bradley Manning--who have made such brave attempts, at the cost of their own freedom, to expose war crimes and defend freedom and democracy.

Mairead Corrigan Maguire won the 1976 Nobel Peace Prize for her work for peace in Northern Ireland. Her book, The Vision of Peace (edited by John Dear, with a foreword by Desmond Tutu and a preface by the Dalai Lama) is available from Wipf and Stock Publishers. She lives in Belfast, Northern Ireland.