Neocolonialism and the civil war in Mali bring regional instability 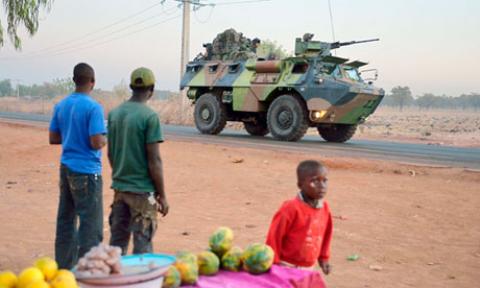 The entrance of the French military into the Malian civil war further complicates a descent into hell which that country has been experiencing for the last two years. Mainstream media attention has largely focused on the emergence of right-wing Islamists associated with Al Qaeda in the Islamic Maghreb, and the threat that this poses to the culture and people of Mali. Yet little background is presented regarding the whole conflict, particularly the circumstances that resulted in the unfolding disaster.

Up to the precipice

The country known as Mali was carved out of what was once known as “French West Africa.” Named after the famous empire of Mali (roughly 1200-1600 AD), Mali included various ethnicities, much like other former European colonies in Africa. In many cases, these ethnicities had little in common, a fact that became particularly important with regard to the Tuareg people in the northern part of the country.

The Tuareg, part of the larger so-called Berber population of northern Africa, engaged in non-violent and violent confrontations with the Malian state almost from the time of independence, in search of greater autonomy. This has been a source of constant instability.

Like most of the former French colonies, Mali remained of interest to France. During the years of Malian President Modibo Keita, efforts at genuine national sovereignty were pursued, but with the overthrow of Keita, French neo-colonial involvement regained the initiative. Mali, a country rich in natural resources, including gold and uranium, has remained important to global capitalism.

The Algerian civil war of the 1990s, along with the Libyan uprising (hijacked by the NATO intervention), had a direct impact on Mali. The Algerian civil war, which counterposed the military government against right-wing Islamists, was filled with atrocities committed by both sides, including atrocities attributed to the fundamentalists actually carried out by forces linked with the government. In the wake of the military defeat of the fundamentalists, a politico-military realignment took place in the camp of the right-wing Islamists and with it, the creation of Al Qaeda in the Islamic Maghreb (AQIM). AQIM has become one of the more successful and well-resourced of fundamentalist/terrorist organizations in Africa. But more importantly, its rise has been used as a pretext by the USA, starting some years ago, for greater US military involvement in the Sahel region of Africa under the guise of fighting terrorism.

The trajectory of the Libyan uprising, which began as a non-violent protest and then escalated into a full-blown civil war in the aftermath of repression by the Qaddafi regime, provided a basis for further instability in the region. In the aftermath of the NATO intervention, which derailed efforts at justice and national sovereignty, the situation in northwest Africa became increasingly unsettled. The source of that instability was the combination of armaments possessed by the now fallen Qaddafi regime that ended up flooding northwest Africa, along with the exit from Libya of many of the late Qaddafi’s former African allies. AQIM, along with dissidents in northern Mali, were major beneficiaries of this flood of arms.

Taking advantage of a weak Malian government and the arms they obtained in Libya, the National Movement for the Liberation of Azawad (MNLA - the French acronym; Azawad is the name given by the Tuareg to the region), launched an uprising. Better organized than the Malian army, they quickly moved to victory, largely seizing northern Mali. Joining in this uprising, however, were various right-wing Islamist groups, including those with ties with Al Qaeda.

The Malian army, finding itself repeatedly defeated by the MNLA, turned against the recognized Malian government and launched a coup d’état. This illegal act was broadly condemned in the international community and did nothing to garner real support for a termination of the conflict with the Tuareg.

In the north of Mali, events shifted unexpectedly. Right-wing Islamists, who had allied with the MNLA, now turned on them. It quickly became clear that their objectives for the uprising in northern Mali clashed with those of the MNLA (the latter seeking an independent northern Mali or “Azawad”). Despite the fact that the MNLA had organized and led the uprising, an alliance of right-wing Islamists revolted against the MNLA and took control of northern Mali. The right-wing Islamists, including but not limited to the AQIM, continued the war with the Malian government, pushing south. As things unraveled for the Malian government, the West African community (ECOWAS) became increasingly concerned about ‘spill-over’ into neighboring countries, including both an expanded Tuareg uprising as well as right-wing Islamist terrorism.

The Malian government, which has proven unstable, corrupt and with little credibility, has found itself unable to defeat the right-wing Islamists. Its cry for help resulted first in discussions about an ECOWAS military intervention in order to stabilize the situation, and, ultimately, to the French intervention with ground troops and aircraft. A new twist is that the MNLA, based in Niger, announced on January 20th that they were prepared to join in the struggle against the right-wing Islamists.

The Malian civil war(s) contains within it sources of profound regional instability. Despite the domination of the right-wing Islamists in northern Mali, the underlying issue is political. Specifically, without addressing the historic demands of the Tuareg population of northern Mali, irrespective of the right-wing Islamists, in addition to the on-going tensions between the Tuareg and ethnic groups in the south of the country, Mali will gain no stability. For that reason alone the French intervention, rather than helping to bring about a resolution to the conflict, may very well extend and expand the conflict.

A second point of note is that the fragile condition of too many African nation-states leaves them incapable of standing up to both corruption and neo-colonialism, not to mention varying forms of fundamentalism (Christian, Muslim, ethnic, etc.). While this is a legacy of colonial rule and the, often, bizarre national borders created at the time of independence and the lack of real economic independence, this situation will not be resolved by anyone but Africans. The involvement of the African Union and ECOWAS can be positive, but only to the extent to which it advances national sovereignty, peace, justice and African unity. Insofar as either of these institutions is perceived as an agent of outside-imperial-interests, they cannot fulfill this historic task.

A third point is that it is not possible to ignore right-wing Islamism, and specifically, right-wing Islamist terrorism. The objectives of the right-wing Islamists, e.g., AQIM, are thoroughly reactionary and destructive, as can be seen by the reign of terror that they have wrought in northern Mali. Their political misogynism along with their fixation on a mythical Islamic past, do not serve the cause of economic and social justice, not to mention African unity. Though they claim the banner of “anti-imperialism,” they are no more genuine anti-imperialist than were the Japanese fascists in World War II who claimed to be fighting for “Asia for the Asians,” while instead advancing their reactionary aims. About this point, one cannot afford any confusion.

In this situation, the USA must desist from its manipulative and provocative role. Beginning during the George W. Bush administration, in the aftermath of the 11 September 2001 terrorist attacks, the US escalated its military presence in the Sahel region of Africa. Though terrorism-Muslim and/or non-Muslim was not the major threat to Africa (whereas, civil wars, poverty, HIV/AIDS, and imperial robbery were), the US insisted on a militarization of the region, including close collaboration with undemocratic regimes. This involvement did not advance democracy, and it certainly did not stop the advance of terrorism. Rather, this irresponsible interventionism coupled with the NATO hijacking of the Libyan uprising, has resulted in exactly the opposite.

A political settlement must be brought about in Mali. This must include the full and unconditional reinstatement of democratic rule in the country. The military must return to the barracks. The French military must also return to their bases…in France, and withdraw from this conflict. ECOWAS and the African Union, however, have a different role. They must step up to the plate and provide multiple levels of support to a process of democratization and stabilization. They are needed as intermediaries in settling the military conflict. They must bring the right amount of pressure to bear on the Malian military to return legitimate political rule to the country. They must help the people of Mali sort out the real and perceived ethnic conflicts that have divided the country. This includes, but is not limited to, the question of the Tuareg.

The role of the African Union and ECOWAS is not, primarily, a military role. Though legitimate authorities in Mali may, at some point, need military assistance as part of the process of stabilization, such a move must be made by the people of Mali rather than the French, the USA, or for that matter, any of the agents of global capitalism within the various African ruling elites. This role for ECOWAS and the African Union must be respected and supported by the United States, rather than undermined and subverted in order to advance the interests of US hegemony and global capitalism.

It is up to the people of the United States of America, particularly, but not exclusively, those of us of African descent, to take a stand on this matter and show real solidarity with the people of Mali rather than fall prey to the demagoguery and misinformation that dominates the mainstream airwaves.
Silence is not an option.