One in three women on the planet will be raped or beaten in her lifetime. One billion women violated is an atrocity. 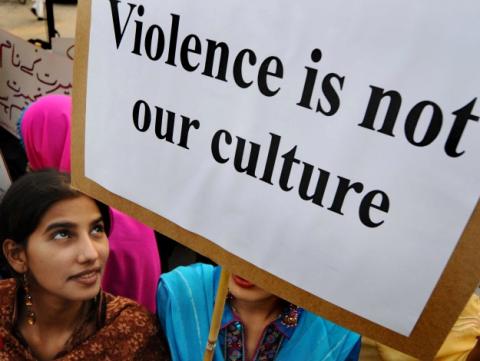 , credit - http://www.foreignpolicy.com/
Today, on the planet, a billion women - one of every three women on the planet - will be raped or beaten in her lifetime. That's ONE BILLION mothers, daughters, sisters, partners, and friends violated. V-Day REFUSES to stand by as more than a billion women experience violence.
On February 14th, 2013, V-Day's 15th Anniversary, we are inviting one billion women and those who love them to walk out, DANCE, RISE UP, AND DEMAND an end to this violence. One Billion Rising is a promise that we will rise up with women and men worldwide to say, "Enough! The violence ends now."
HERE'S HOW YOU CAN START A RISING - Stage a rising in your community, office, college, or school. Organize a flash mob at a landmark building/site, in the streets or in a nearby mall. Have a dance party, produce a theatrical event, march in your streets, protest, strike, dance and above all RISE!
GET STARTED
Watch a Live Rising
V-DAY's ONE BILLION RISING: 14 FEBRUARY 2013
FOR IMMEDIATE RELEASE
Contact:
Sriya Karumanchi / Group SJR
media@vday.org; 917.267.2931 (o), 248.756.4795 (c)
Susan Celia Swan / V-Day
susan@vday.org; 917.865.6603 (c)
(13 February 2013) - V-Day, the global activist movement to end violence against women and girls, announces the final escalation of its year-long ONE BILLION RISING campaign. On Thursday, 14 February, women and men in 203 countries will come together in the largest day of mass action ever to stop violence against women and girls, to express their outrage, and to strike, dance and RISE to support an end to violence against women once and for all.

"February 14, 2013 will change the world not because it is a day of magic, although there are indeed mystical elements surrounding this campaign. It will change the world because the preparation for it and organizing for it has already created an energetic wind or wave igniting existing efforts to end violence against women and create new ones," said V-Day Founder and award winning playwright Eve Ensler. "It has brought together coalitions of groups and individuals that have never worked together before; brought in all kinds of new people and groups and associations and masses of men who are not aware of the issue but are now working on it; brought violence against women, through our numbers and efforts to the center of the discussion. On February 14, we are rising together because it is in our connectedness, in our stomping feet and uncontrollable hips that the path and energy will be created to bring in a new world. We will galvanize the will and the passion of everyone rising around the world to create change."