Banks and public transport disrupted with at least two people reported dead amid protests across the country. 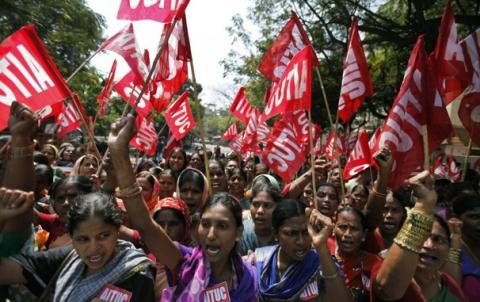 Indian workers participate in a rally on the first day of a two day strike in Hyderabad, India, Wednesday, Feb. 20, 2013., Mahesh Kumar A.

A strike by millions of low-skilled workers in India has seen banks close and public transport disrupted, amid reports of two deaths in the north.

An estimated 100 million Indians, angry about rising prices, low pay and poor working condition, walked off their jobs on Wednesday, on the first day of a two-day strike organised by eleven major trade unions.

"Workers are being totally ignored and this is reflected in the government's anti-labour policies," said Tapan Sen, general secretary of the umbrella Centre of Indian Trade Unions.

Earlier this week, Prime Minister Manmohan Singh, who is facing the worst economic slowdown in a decade, had asked for the strike to be called off.

However, the strike went ahead after the government refused to bow to union demands to reverse recent reforms aimed at opening sectors, including retail and airlines, to greater participation by foreign investors.

"We want the government to take note of this," said Akhtar Hussain, vice-president of the Bharatiya Mazdoor Sangh, or Indian Workers' Union.

"We need our demands to be met. The government needs to be more serious."

Al Jazeera’s Sohail Rahman, reporting from Gurgaon, in the state of Harayana, said the strike's impact could affect the government's future agenda as it decides "how high up on the agenda issues of minimum wage and workers' rights will be discussed at the Lok Sabha (the lower house of parliament)".

In many areas public transport was not running, banks were closed and most shops and offices kept their shutters down.

Mumbai was largely unaffected but banks and insurance companies were closed there too.

In Bhubaneswar, the capital of Odisha state in the east, protesters set fire to effigies of Singh and ruling Congress party leader Sonia Gandhi.

Several trains were stranded at stations as protesters blocked railway tracks. In the western state of Gujarat, close to 8,000 state-owned buses were off the roads, officials said.

One labour leader was reportedly killed in the northern city of Ambala.

He was squatting along with a group of workers near the local bus depot as part of the strike when he was hit by a bus in his bid to stop it from leaving the terminal, the Times of India reported.

"The incident took place around 4 am this morning when Narender Singh, a bus driver by profession, tried to stop the vehicle which was being taken out from the Ambala Depot despite the strike," said Inder Singh Bhadana, the district president of the Haryana Roadways Workers Union.

Another person is reported to have died in Noida, a city where workers earlier clashed with factory owners.

The Associated Chambers of Commerce and Industry estimated losses from the strike at more than $3.7bn.

"The national economy ... can ill afford this situation. In fact, the strike would aggravate the price situation because of disruption in supply line of essential commodities," the chamber said in a statement.