Of the five documentaries nominated for the Academy Awards on Thursday, no film hits Washington more directly than “The Invisible War,” which looks at sexual assault in the U.S. military. It didn't win the Oscar Sunday night. 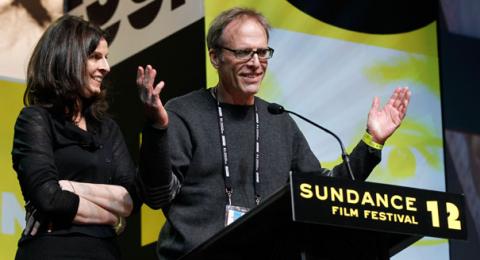 Of the five documentaries nominated for the Academy Awards on Thursday, no film hits Washington more directly than “The Invisible War,” which looks at sexual assault in the U.S. military.

“Absolutely, it’s a political film,” director Kirby Dick told POLITICO in the wake of the Academy’s announcement. “It was made to have an impact on policy. … We — and actually every one of them who we interviewed — were making this film so we’d help protect the current service members, men and women in the military.”

The film, which premiered at the 2012 Sundance Film Festival, interviews victims of sexual assaults in the military and talks with politicians such as Reps. Chellie Pingree (D-Maine), Louise Slaughter (D-N.Y.) and Loretta Sanchez (D-Calif.). The film is reportedly credited with having inspired Secretary of Defense Leon Panetta to take action to eradicate sexual assault.

Dick jokingly said he learned of his film’s nomination Thursday the “old-fashioned way” — by going online, like everybody else. “We feel great,” he said.

And he said the nomination was especially gratifying “given the fact that it was such a strong set of films on the shortlist.”

“Any one of those films could have been in the Top Five.” The other films nominated are “Searching for Sugarman,” “The Gatekeepers,” “How to Survive a Plague” and “5 Broken Cameras.”

It’s not the first Oscar nod for Dick; his 2004 documentary about sexual abuse at the hands of a Catholic priest, “Twist of Faith,” earned a nomination. Dick is also well-known for his 2006 documentary, “This Film Is Not Yet Rated,” which examined the Motion Picture Association of America’s ratings system. “Outrage,” Dick’s 2009 film about political opposition to gay rights, earned him an Emmy for Outstanding Investigative Journalism.

Although “The Invisible War” has already earned accolades, such as Sundance’s Audience Award for U.S. Documentary, Dick says an Oscar nod goes a long way in bringing attention to this issue.

“It’s a huge step towards shining a light on this,” Dick said. “The film has really done so much to bring attention to this issue. A year ago, when the film premiered, very few people in this country were aware of what an issue this was, and this has been changing over the year and I think a fair amount has been due to the film.”

Dick says there are “quite a few things on the wishlist that still need to get done” in order to prevent sexual assaults in the military.

“This decision to investigate and prosecute sexual assault has to be taken out of the chain of command,” Dick said. “In every civilian system of justice, there is not this conflict of interest that exists in the military. It’s been done in other militaries around the world and it would improve the system of justice in the military, certainly, and make for a stronger military.”

Dick says he continues to receive messages of support and thanks from people within the Department of Defense.

“We keep getting off-the-record notes from people within about how much of an effect this film has had on how they are approaching this issue.”