‘Demographics’ Are Not Simply Passive Numbers, They Also Often Rise Up and Rebel

What was most striking about the 2012 election, then, was that in the face of this attack on our right to vote, there was something akin to a popular revolt by the African American and Latino electorate. Latinos voted over 70% for Obama and African Americans over 93%. What happened in the 2012 election was very much about demographics. African Americans, Latinos and Asians turned out in significant numbers, voting overwhelmingly for the Democrats. 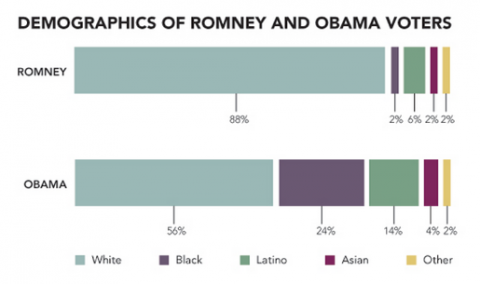 Demographics of Romney and Obama voters,

Feb 22, 2013 – Leading up to November 6, I found myself focused on the matter of voter suppression and electoral shenanigans committed by the Republicans. This concern was not for nothing. Prior to and on Election Day there were myriad attempts to subvert the vote, particularly the vote of people of color. Frivolous voter challenges started well before Election Day itself, again targeting African American and Latino voters.

What was most striking about the 2012 election, then, was that in the face of this attack on our right to vote, there was something akin to a popular revolt by the African American and Latino electorate. Latinos voted over 70% for Obama and African Americans over 93%. But those figures do not tell enough. It was the turnout that was so significant.

Despite efforts by the political Right to dampen African American enthusiasm for Obama, using the issue of same-sex marriage, this tactic failed dismally. And Romney’s cynical anti-Latino approach, as evidenced during this primary campaign, came back to bite him in the rear.

It was more than this, however. It was something that you had to feel if you waited in line to vote.

I went three times to try to engage in early voting.

The first two times the line was out the building and I decided to return at a later date.

On the third time, I thought I had arrived early enough only to discover that the line started well within the building. I was on line for two hours, and this was early voting.

Around the USA, there were stories like that one — people standing in line for one to seven hours in order to vote.

In effect, what we saw was a counterattack by the African American and Latino electorate against those who would attempt to disenfranchise us. The obvious intent to eliminate African American and Latino voters, rather than scaring us into submission and docility, energized us to turn out in record numbers. There are many lessons there and one is that we can actually overwhelm the other side by sheer numbers and audacity.

On one level it is easy to understand why many Republicans found it difficult to believe that Mitt Romney did not win the election. First, the US remains in the grip of an economic crisis with an official unemployment rate of 7.9%.

In some communities, the unemployment is closer to 20%.

While the Obama administration had taken certain steps to address the economic crisis, the steps have been insufficient in light of the global nature of the crisis.

What happened in the 2012 election was very much about demographics.

Yet despite the intimidation caused by voter suppression statutes — and threatened voter intimidation by right-wing groups: African Americans, Latinos and Asians turned out in significant numbers, voting overwhelmingly for the Democrats. Ninety-three percent of African Americans went with Obama, as did 71% of Latinos (which represented an increase over 2008) and, despite the fact that Asians are only 2-3% of the electorate, they went 73% in favor of Obama (which was a jump from 62% in 2008). The youth vote increased to 19% of the electorate, over 18% in 2008, and went overwhelmingly for Obama. Labor union members went for Obama at a rate of 65%, and unions themselves played a major role in many key states in terms of voter mobilization.

The Romney/Ryan camp was entirely unprepared for this.

It is important to understand that the African American/Latino/Asian turnout, along with the long-lines waiting to vote (including in the days of early voting) represented an audacious defiance of the forces that sought to suppress the vote. This audaciousness also represented a response to the increasingly racist attacks on Obama, attacks that were taken very personally by people of color generally and African Americans in particular.

(Attacks such as Donald Trump’s insulting demand that President Obama turn over his college transcripts. The suggestion of such an action is almost unbelievable. Nothing along those lines would have been tolerated when it came to former President George W. Bush, an individual who was not half the student that was Obama in college. The same goes for the right-wing, irrationalist political movement that asserts that Obama was not born in the United States and is, therefore, not the legitimate president of the United States.)

What was at stake in 2012 was not Obama’s record but instead 2012 was a referendum over demographics and the role of government with the far right. Some on the Left found this assertion worthy of ridicule rather than introspection, and dismissed it, claiming that of course Obama’s record was central to the debate.

The results of the election conform much more to our conclusions. The vote for Obama, particularly by people of color, could not possibly have been the result of the conclusion that Obama’s record made him the great leader.

Certainly his record was better than the interpretation projected by Romney/Ryan, but it was also the case that Obama’s record was complicated if not problematic. After all, we had witnessed an economic stimulus that, while significant by historical standards, was insufficient to the task; a healthcare reform package that, while bringing health care to millions, was based on a corporate model first elaborated by Mitt Romney when he was Governor of Massachusetts; a failure to close Guantanamo; the continuation and escalation of the Afghanistan/Pakistan war, including the usage of drone strikes; and the failure to adopt a clear policy to address systemic racial injustice in the USA. While there were a number of reforms that were introduced that were of significance, this was all far less than most of Obama’s supporters had hoped would be introduced.

So, what then could one say motivated the vote?

We return to demographics and the role of government. Obama’s very existence represents the problematic future for the political Right; it’s not that he’s an individual whose birthplace is alleged by them to not be in the USA. This insane propaganda from the Birther movement is designed to distort the point entirely. The Birthers and their offspring hate Obama not because of where he was born but because he was born here. His very existence illustrates the changing demographics of the USA and its move away from being a `white republic’ governed by a broad `white’ front.

Instead, we are moving more towards something else, toward a more openly multi- ethnic/multi-racial society, if not politically then at least numerically.

The election thus represented a repudiation of the right-wing irrationalists seeking to turn the clock back, and not just on race, but gender and class as well. In this sense it was not so much about what Obama had accomplished as it was about what sort of society 61 million people did not want. That retrograde society, which was rejected, was a neo-apartheid order of domination that condemned at least 47% of the population (according to Romney’s calculations) to marginalization, and condemned at least 90% of society to continued economic distress and submission.

Romney was proposing to reduce the role of government even further, at least when it came to supporting something approaching a social safety net. 61 million people recognized the barbarism contained in his message and program, and responded accordingly.

In sum, the November 6th elections were not a referendum challenging Obama’s course from the Left, but rather rejecting a challenge from the Right, since there was no viable Left alternative. At the same time there was an additional interesting feature of the elections as identified in various opinion polls: Democratic voters, while not as starry-eyed as many were in 2008, are looking for Obama to fight for them, or at least fight on their behalf. Frustration with Obama’s premature compromising in

the name of so-called bi- partisanship wins the President few accolades within his base. The electorate is looking for something very different.

In the lead up to the 2012 elections the Left was badly divided over how to respond. One segment, which we will describe as the "mouths that screeched" were adamant that Obama had betrayed progressives; that he was not progressive; that he represented the empire; and therefore not only should not be supported but that it was ideological treason to suggest any level of support or even just to give him a vote without any implied support.

The vitriolic attacks coming from this sector masked the fact that this segment of the Left is actually becoming irrelevant. They had no visible impact on the elections and their protests were largely ignored. Unfortunately, one of the key things that this segment missed was the racial element of the 2012 elections and the need for voters of color, along with a good number of white allies, to push back at the `demographic’ attacks that were underway from the political Right. By focusing on all that Obama did incorrectly, this segment of the Left ignored, as well, that the Left and progressives are on the strategic defensive in the USA and that they need allies—especially among people of color.

We on the Left must pay much greater attention to what is transpiring among the people themselves. The fact that so many on the Left focused on Obama’s record and virtually ignored the intense racist offensive against Obama (and its broader implications) demonstrated that many of our friends are out of touch with reality.

Reality, however, is a good and necessary starting point if one ever wishes to build a majoritarian bloc and win power.

Bill Fletcher, Jr. is a racial justice, labor and international writer and activist. He is a Senior Scholar with the Institute for Policy Studies, the immediate past president of TransAfrica Forum, an editorial board member of BlackCommentator.com, the co-author of Solidarity Divided, and the author of the forthcoming "They’re Bankrupting Us–And Twenty Other Myths about Unions.” He can be reached at billfletcherjr@gmail.com.