After today's oral arguments on Section 5 of the Voting Rights Act, it seems unlikely that the Supreme Court's conservative wing will want to uphold the landmark win for civil rights. 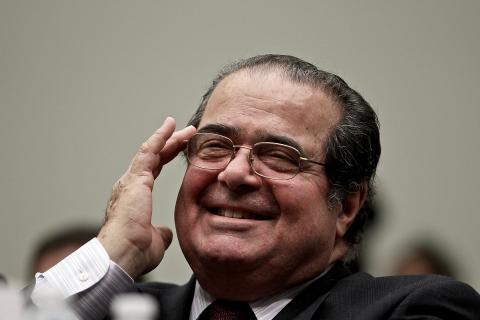 It is hard to overstate the importance of the Voting Rights Act of 1965. At the heart of the law that ended decades of disenfranchisement in former Confederate states is Section 5, the "preclearance" provision. Section 5 requires jurisdictions with a history of discrimination to get prior federal approval for any changes to state voting laws. The necessity of this provision was clear: without it, states had been able to nullify the commands of the 15th Amendment by passing measures that were formally race-neutral but were discriminatory in practice.

Regrettably, the Supreme Court appears poised to eliminate one of the proudest achievements of American democracy. As Esquire's Charles Pierce puts it, striking down Section 5 would constitute "the final victory of the long march against the achievements of the Civil Rights Movement that began almost before the ink dried on the bill in 1965."

The most remarkable example of the contemporary Republican hostility to civil rights came, unsurprisingly, from Antonin Scalia. Ensuring equal access to the ballot, asserted Scalia, represents "a phenomenon that has been called the perpetuation of racial entitlement." As it happens, Scalia's argument has precedent ... in the white supremacist arguments made by the Supreme Court in the 19th Century when it was dismantling Reconstruction. In the Civil Rights Cases, the majority opinion sniffed as it struck down the Civil Rights Act of 1875 that "there must be some stage in the progress of his elevation when [the freed slave] takes the rank of a mere citizen and ceases to be the special favorite of the laws." As Justice Harlan noted in dissent, this line of argument was nonsense: "What the nation, through Congress, has sought to accomplish in reference to [African-Americans] is what had already been done in every State of the Union for the white race—to secure and protect rights belonging to them as freemen and citizens, nothing more." Harlan was right then, and he's even more obviously right now. Ensuring equal access to the ballot does not represent a "perpetuation of racial entitlement." It simply provides the foundation for equal citizenship.

Scalia's arguments about "racial entitlements" also represent an odd theory of democracy. The strong support for the VRA, Scalia argues, is just a product of the fact that "when a society enacts racial entitlements, it is very difficult to get out of them through the ordinary political process." Note, first of all, the hostility evident in Scalia's phrasing: he seems to take for granted that it's an important goal to "get rid of" what he erroneously calls a "racial entitlement." And leaving that aside, his argument perversely assumes the effectiveness of the bill and the political support it generated are reasons the Court should strike it down. This makes no sense. As Justice Breyer noted, it's not irrational for legislators to want to continue to apply a remedy that has largely (but not fully) eradicated the disease of disenfranchisement. Nor is Scalia's belief that politics compels legislators in every state to vote for the bill (a Republican would lose a Senate seat in Utah or Mississippi of he voted against it? Really?) particularly plausible.

Scalia has made similar arguments before. The last time the Supreme Court heard arguments about the VRA, Scalia argued that the 98-0 vote was irrelevant because "The Israeli supreme court ... used to have a rule that if the death penalty was pronounced unanimously, it was invalid, because there must be something wrong there." As is Scalia's trademark, the argument is a superficially clever one that collapses on the slightest inspection. Most democratic jury systems—including the American one—are premised on the idea that a unanimous jury is more reliable one than a non-unanimous one, for the obvious reason that this is true. And while the unanimity of the Senate does not in and of itself ensure that the act is constitutional, it should certainly make the Court more reluctant to strike it down.

The rest of the points made by the conservative justices today made clear that not only are they likely to find Section 5 unconstitutional in this form, but in any possible form. They questioned whether a history of discrimination was sufficient reason to apply preclearance requirements to the nine states covered by Section 5. Could Congress avoid this problem by covering everyone? Apparently not. After the Solicitor General responded to Justice Kennedy's question about whether the "preclearance device could be enacted to the entire United States" by saying that this would not be justified based on the current record, Kennedy responded "there is a federalism interest in making each state responsible" for enforcing voting rights.

Congress can't win—given that Kennedy is the swing vote, whether the legislative body applies preclearance selectively or uniformly, its actions will likely be struck down by a Court that values "states' rights" over fundamental human rights.

This is the wrong approach. The Fifteenth Amendment gives Congress broad discretion to enforce voting rights, and the Court should defer to to Congress barring much stronger arguments than are currently being advanced against the VRA. The relative success of the Act and the strong bipartisan support it enjoys are reasons to uphold it, not to strike it down. States remain capable of devising creative new ways to disenfrachise voters. And as Justice Scalia (perhaps inadvertently) let out of the bag, if the Court strikes it down it will not be because it is compelled to by the text of the Constitution, but because of conservative hostility to the idea of civil rights and a broad franchise.