If This Is The Deal, Philly Teachers Should Strike

Here come the contract demands that the Philadelphia School District would like to cram down the throat of the city's unionized school teachers. The so-called City of Brotherly Love is on the brink of setting a new standard in squeezing middle- class workers to death. It's not like we haven't seen this story before: Working men and women asked to take a sizable pay cut...and work longer hours...and pay more for shrinking benefits. 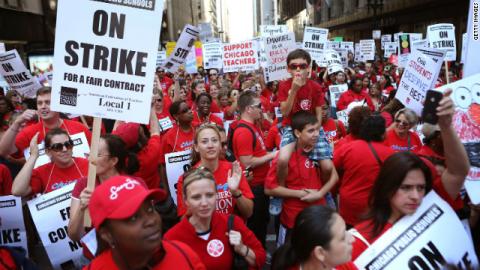 Chicago teachers on strike at the beginning of September 2012., credit - CNN
Apparently the old saying is wrong: You can get blood from a stone after all. In a world where "the American Dream" has become a year in which your salary stays the same, the so-called City of Brotherly Love is on the brink of setting a new standard in squeezing middle- class workers to death. It's not like we haven't seen this story before: Working men and women asked to take a sizable pay cut...and work longer hours...and pay more for shrinking benefits. Usually such reports alternate with the news that the CEO of that same outfit is leaving with a golden parachute worth hundreds of thousands of dollars, maybe millions.
But just when you think it can't get any worse, here come the contract demands that the Philadelphia School District would like to cram down the throat of the city's unionized school teachers. The news -- first reported by Kristen Graham of the Inquirer -- is a jaw- dropper:
-- Large pay cuts imposed in teachers up to 13 percent for those making (a whopping) $55,000 a year or more. then frozen until 2017.
-- A sizable jump in out of pocket costs for health coverage.
-- In return for this honor, teachers would have to increase their work day from just over 7 hours now to eight hours, and "would also have to lead professional development, attend meetings, perform bus, yard and lunch duty and be available for parent meetings outside work hours with no extra pay."
-- There's a lot more, but one of my favorites is that the district would no longer have to provide, among other things, "water fountains, parking facilities, [or] desks for teachers..." (although presumably some teachers would retain these? Who knows?)
-- It should be noted that many of these cuts are not so much harmful to the teachers as to the kids -- lifting limits on class sizes and not requiring librarians or guidance counselors in every school, for example.
This is outrageous for so many reasons that it's hard to know where to begin. It is worth noting a couple of cavaets. Obviously, this is an opening negotiation gambit and not the final offer; it's hard to imagine that even if the district sought to impose terms on the union (which would surely cause a strike -- more on that in a minute) that they could possibly be this draconian. I've heard that some of this may be a spring offensive to get hundreds of teachers to take early retirement -- and I'm sure it will work. Those things said, one also senses that the schools district -- egged on by its high-priced Boston consultants -- "means business" this time.
I think there's three levels to look at this. Human nature tends to look at the micro, and people are going to be tempted to point out all the management waste and excess that preceded this -- late superintendent Arlene Ackerman's $900,000 severance check and her cadre of overpriced spin doctors and how Ackerman's replacement William Hite came in and gave pay raises -- to 25 non- union employees. (Just the first three that popped into my head, frankly.) But this goes so much deeper.
On what you might call the middle-macro level, this would appear to be the final offensive by a grand alliiance of hedge-funders, libertarians and assorted right-wingers, the purely profit-minded and misguided philanthropies and their well-heeled consultants to destroy public education in Philadelphia, once a font of opportunity for children from every social class. Again, just to pick off the low-hanging fruit, it's unconscionable to seek to destroy the lives of hard- working teachers when we have a local charter school operator building a $28.9 million mansion in Palm Beach and when Pennsylvania continues to throw away millions of dollars on shady cyber-schools.
But look, the real outrage here is on the macro-macro level. Do we really live in a nation where millions obsess over the "freedom and liberty" of CEOs to make 380 times as much as his average worker or not to provide those employees with health insurance, but no one gets worked up when the people teaching our children are nickled and dimed out of their jobs? Where it's an act of political derring-do to suggest that just maybe workers should get a minimum wage of $9 an hour? Where there's not any problem that can't be solved by asking rank-and-file workers to take a few dollars less, while working a few hours more -- and jacking up their kid's college tuition while they're at it?
The time to stop this downward spiral of bulls--t is right now -- and what better place to start than Philadelphia, the city where America began. Hopefully, this contract proposal from the Philadelphia School District will die from its own ridiculouslessness, albeit after they've scared some good and dedicated veteran teachers out of the classroom. But if this really is the deal, Philadelphia teachers need to walk off the job. That's right -- strike. And anyone who cares about the ability of the middle class to raise a family -- particularly a well-educated family -- needs to stand behind them. Be inspired by what happened in Chicago, where most of the community stood behind its teachers.
Strike? I know what some of you are saying -- what about the kids? Spare me. Aside from the basic -- and fairly obvious -- fact that the long-term education of Philadelphia's children would die the death of 1,000 cuts here, there's something bigger at play. What I would like Philadelphia's...no, America's....kids to witness first-hand, more than anything else, is that they can grow up to be adults who will fight for their rights, for their families -- and for their human dignity.
And win.
[Will Bunch, a senior writer at the Philadelphia Daily News, blogs about his obsessions, including national and local politics and world affairs, the media, pop music, the Philadelphia Phillies, soccer and other sports, not necessarily in that order.]