Faced with a vote to remove her, the city's first woman leader vows to battle on 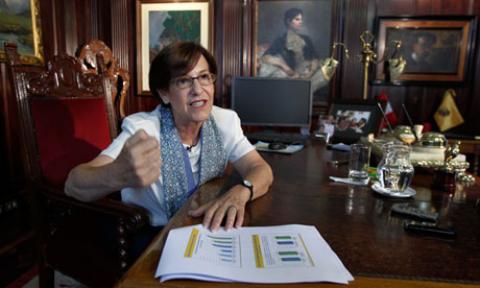 Susana Villarán Lima's mayor Susana Villarán, the first woman ever elected to the office, has made many powerful enemies in her two-year tenure., Martin Mejia/AP

With her hippyish air, easy smile and penchant for
flowing scarves, Susana Villarán might have looked to
her opponents like a soft touch. But from the moment
she became Lima's first female mayor two years ago, she
has upset the status quo, taking on vested interests
and shaking up a city that is home to one third of
Peru's 30 million people.

So robust has she been in taking on rackets and cartels
that operate the much-maligned transport system and
wholesale markets that she has made enough enemies to
threaten her tenure: later this month, voters will be
balloted on whether to remove the mayor halfway through
her term.

A charismatic career human rights activist, Villarán,
63, has nonetheless failed to win over a sizeable
portion of Lima residents. Current polls indicate that
a slight majority favour removing her, although her
backers include the former UN secretary general, Javier
Pérez de Cuéllar, the Peruvian president, Ollanta
Humala, intellectuals and even the political party of
Lourdes Flores, the opponent she beat to the mayoral
office.

But the opposition was there from the beginning,
Villarán says. She had barely sat in the mayoral seat
before her political enemies were plotting her
downfall: "I was not invited to the party, I was not
the one who was supposed to be in the mayor's office,"
she said.

Fernando Tuesta, a politics professor at Lima's La
Católica University, agrees. "She'd barely won when
groups, political parties and sectors of the media
began a campaign against her," he said. But he adds
that Villarán, the leader of the tiny Fuerza Social
(Social Force) party, "didn't build the necessary
political alliances, leaving her very isolated".

Villarán insists she didn't want to use her term as a
"trampoline for the presidency. I didn't come into
politics to behave like that." That is why, she says,
she did not shy away from tackling the city's thorniest
issues. The public transport network is dominated by
ramshackle buses known as "combis", which weave across
lanes of traffic belching black diesel fumes and
stopping wherever they like. About 300,000 taxi cabs
further clog up Lima's arteries.

"It's really a necessity for Lima after three decades
of absolute informality, disorder and chaos to impose
some order," she said. She is trying to get bus drivers
who work long hours with no benefits and are paid
according to the number of passengers to accept fixed
salaries. Taxi ranks will be installed to reduce
congestion.

Villarán also pushed ahead with a move that the city's
mayors have shied away from for decades: relocating the
Parada wholesale market, which resulted in deadly
clashes with the police in October. Neither of these
moves has made her popular with the estimated 70% of
Peruvians who work in the unregulated, informal sector.
There is also growing impatience to see infrastructure
improvements, particularly in the city's poorer,
outlying neighbourhoods.

"Lima is paralysed, there are no concrete public works,
no successful social programmes and crime is up," says
Shadia Valdez, 24, a lawyer campaigning in the yellow
colours of the campaign to remove Villarán.

Marco Tulio Gutiérrez, a lawyer who has become the face
of the anti-Villarán campaign, has capitalised on the
perceived lack of construction: "The public disapproval
for her mandate shows that people want physical public
works. That's what a city like Lima needs. This lady
has done absolutely nothing, just words, words, words,"
he said.

Villarán's supporters accuse Gutiérrez of being a
frontman for her predecessor, Luis Castañeda, who left
office with 85% approval after building joint public-
private hospitals and hundreds of stairways in the
city's poor outlying hillsides. Villarán insists she
has invested more in infrastructure than Castañeda but
admits "errors" in failing to publicise them.

In the poor district of Villa María del Triunfo, where
from a distance the homes look like multicoloured
confetti scattered on an anthill, support for Villarán
grows as walls and stairways are built. A park is also
planned. "Neighbourhoods like ours have always been
forgotten but Miss Susana is moving forward with the
works," said resident Juana de la Sota, 67. "She's
working out of love for the people, not out of love for
her pocket! Let her finish the good works she's doing."

In neighbouring Villa el Salvador, community leader
Tony Palomino also supports Villarán. "This is a battle
between honesty and corruption. It's that simple," he
said.

Coming into office, Villarán sought corruption charges
against Castañeda. The former mayor is alleged to have
diverted $10m in public funds into a phantom company.
No charges have been brought.

She has also enraged religious conservatives in the
Catholic and evangelical churches by supporting gay
rights and bringing in a bylaw prohibiting
discrimination against the lesbian, gay, bisexual and
transgender community (LGBTs).

Faced with losing her job, Villarán realises she has
stepped on a lot of political toes but, apart from
having better communication, she says she would not
have done anything differently.

"I wanted to build a Lima that was more fair and just,"
she reflects. "Perhaps it was too idealistic to want to
be part of a process of transformation for the city."

• This article was initially illustrated with an image
of Villarán's rival, Lourdes Flores. This has been
recitified.

© 2013 Guardian News and Media Limited or its
affiliated companies. All rights reserved.