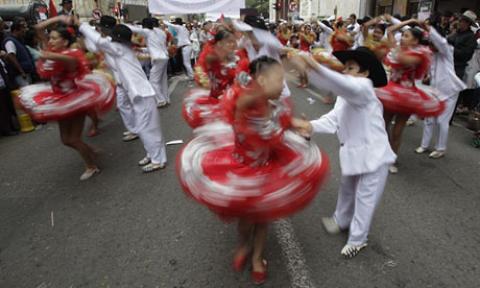 Dancers perform at a march held in Bogotá to support peace talks between the government and the FARC, Fernando Vergara/AP

Tens of thousands of Colombians have taken to the streets of Bogotá in support of peace talks aimed at ending Latin America's longest-running insurgency.

Wearing white, playing music and chanting "We want peace," the dense crowds marched towards the Plaza Bolivar where they were joined by President Juan Manuel Santos.

"The nation is expressing its rejection of violence; violence that has caused so many wounds and so much pain," Santos said of the rally, which comes amid a sensitive and controversial stage of negotiations in Havana between the Colombian government and the Revolutionary Armed Forces of Colombia (Farc).

After more than half a century of conflict that has claimed at least 70,000 lives and displaced millions more, the latest round of face-to-face talks began in Oslo in 2012 and has resumed in Cuba.

The government's chief negotiator in the discussions, Humberto de la Cale, announced last week that an agreement had been reached over land reform, an issue that has been central to the armed rebels' campaign. Talks on other areas of contention such as political participation of the Farc will resume next Thursday, 18 April.

But the changes are opposed by landowners and former president Alvaro Uribe, who has been scathing in his criticism of a peace process that he says involves too many concessions to the rebels. "My opposition to the peace process isn't against peace, it's against impunity," Uribe said on his Twitter account.

While in power between 2002 and 2010, Uribe rejected peace talks and strengthened counter-insurgency efforts by the army.

The last peace talks took place a decade ago during the administration of Andrés Pastrana Arango and fell apart amid continuous postponements, disagreements and an escalation of armed activity.

Critics of the mass demonstrations on Tuesday claim they were partly funded by the Farc and could be used as a springboard by the group to re-enter mainstream politics. They have not produced any evidence to support the claims

However, the leftist politicians who organised the march in Bogotá , including Ivan Cepeda and Piedad Cordoba, say it was an important show of solidarity for the negotiators. It took place on the anniversary of the murder of Jorge Eliecer Gaitan, the leftwing presidential candidate whose death in 1948 - just as he looked set to take power - is often cited as the spark for the decades of bloodshed that followed.

The rallies - which also took place in several other cities, including Cali and Santander - were led by the Patriotic March, a grassroots social movement that campaigns for peace and social justice. It was joined by organisations representing rural peasants, indigenous populations and organised labour, as well as the mayor of Bogota and the leader of the Colombian House of Representatives.

Among the demonstrators was Luis Angel Garcia, who said he survived four attempts on his life while he was a member in the 1990s of the Patriotic Union, a civil society group that supported the Farc. "We are survivors and we are here supporting this movement," he said.

March spokesman Nahum Munera, a professor at the National University, expressed hope that the dialogue in Havana could led to a breakthrough. "This march is a step forward so the war can come to an end and there can be peace," he said.