The gulf between CEO pay and staff McWages is shockingly wide: a strike serves this system of super-exploitation right 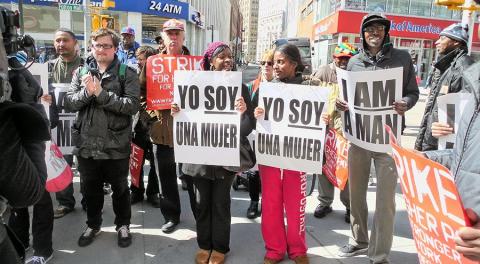 Last week, approximately 400 workers in the fast food industry went on a one-day strike protesting the "McWages" that keep them them living at or even below the poverty line. Despite their modest demands – the workers want to be able to exercise their right to form a union without intimidation or harassment and they want to be paid a living wage of $15 per hour – they face an uphill battle to achieve them.One of the catch phrases used by striking workers was "we cannot survive on seven twenty-five," a reference to the insulting $7.25 average hourly wage most fast food workers in New York get paid. This paltry sum, which adds up to less than $300 pre tax for a 40-hour week, would not amount to a living wage anywhere in the country, and doesn't even come close in New York, one of the most expensive of cities in the US to live in. That is the federal minimum wage, however – and it's not hard to imagine that employees would be paid even less than $7.25 an hour if their bosses could get away with it.

One striking worker, Joseph Barrera, who works for TacoBell, told MSNBC's Chris Hayes that when he started working at the chain, at the age of 15, he was paid $7.15 an hour. Six years later, as a supervisor, his pay has increased to $7.25 an hour, a ten cents raise. If you're finding it hard to imagine how Barrera makes it through the month on such meager wages, that's because he can't. He says he often has to skip meals or walk to work because he can't afford the subway fare and he hasn't bought clothes in years. He'd like to be able to get married and start a family, but doing so on his full-time supervisor's salary is impossible.

Treating an employee this badly might be excusable if the company that hired him was struggling for survival, but this is far from the case. Yum Brands Inc, which owns Taco Bell, as well as KFC and Pizza Hut, proudly boasts on its website an EPS growth of 13% in 2012, an increased dividend for shareholders of 18%, and a net income of $1.6bn. Rival fast food companies like McDonald's, Burger King and Wendy's are all doing similarly well: according to Business Wire, fast food is one of the fastest growing industries, thanks to a competitive cost advantage.

Yet, the fast food companies are not only unembarrassed about how they exploit their workers, but they actually seem to think they are doing employees like Barrera a favor in providing him with a job that is a step above indentured servitude. This attitude is evident in the various statements made by the companies to the media following the strike. Burger King issued a communique saying that the company has provided "an entry point into the workforce for millions of Americans" and that they "offer compensation and benefits that are consistent with the QSR [quick service restaurant] industry".

McDonald's also waxed lyrical about their commitment to their workers, and said that "employees are paid competitive wages and have access to flexible schedules and quality, affordable benefits." The National Restaurant Association went a step further and seemed to be almost looking for sympathy with their statement that "the industry provides more than 13m jobs, that could be jeopardized if the minimum wage goes up." My personal favorite was this nugget, also from the National Restaurant Association:

"The industry is one of the best paths to achieving the American Dream."

If the American Dream circa 2013 has morphed into a nightmare of inescapable poverty and struggle, then I guess they have a point. I think, however, most hardworking Americans – and surely, anyone who puts in a grueling 40-plus-hour week at a fast food restaurant counts as a hardworking American? – have higher expectations of the American Dream than the fast food industry has in mind for them. But perhaps the National Restaurant Association was referring to senior executives and those lucky few who end up as CEOs, because for them, the fast food industry is dreamy indeed.

In general, CEOs in the US earn 380 times what their average employee earns. That rather shocking disparity starts to look almost modest, however, when compared with the fast food world. In 2011, the CEO of McDonalds earned over $20m, which means he was paid nearly 1,333 times more than the average crew member or cashier, who earns around $8 an hour or less. Even if those employees were to get their wish of earning $15 an hour, the CEO would still be earning 640 times more than them.

But don't expect McDonald's CEO, or any of the fast food restaurant CEOs, to accept this outrageous pay disparity as a reason to raise their employees wages. The only way workers will ever change their situation is to mobilize and strike. But going on strike when you are not in a union, and are easy to fire and replace, is incredibly risky. Last week, 400 workers took that risk regardless – and as long as the media and the public keep paying attention, it will be difficult for their companies to make them suffer for it.

So far, it's one-nil for the brave 400. Imagine what could happen if all 13 million of their colleagues followed their lead.