Venezuela Opposition Continues Protest - Is Coup in the Works 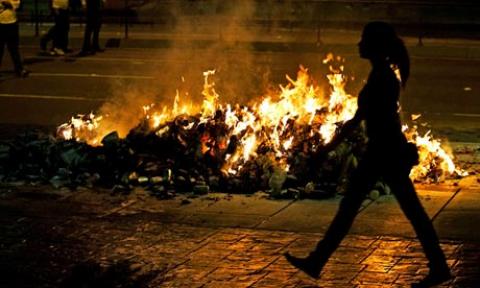 A woman walks past a bonfire lit during protests in Caracas by supporters of the Venezuelan opposition., The Guardian / Ronaldo Schemidt/AFP/Getty Images
Nicolás Maduro accuses opposition of coup plot as poll protests turn deadly
Venezuela's president-elect likens demonstrations to 2002 attempt against Chávez as seven die in post-election violence
Virginia Lopez in Caracas
April 16, 2013
The Guardian (UK)
Venezuela's president-elect, Nicolás Maduro, has announced that five people had been killed during violent protests across the country following the dispute election that gave him a 1.6-percentage point victory.
Claiming electoral fraud, the opposition candidate, Henrique Capriles, has asked for a recount, a request Maduro had originally accepted during a televised speech on Sunday but then dismissed on Tuesday along with high-ranking officials and the head of the electoral commission (CNE), Tibisay Lucena.
Lucena, whose house has been allegedly attacked by protesters, said 54% of the electronic vote had been audited and that the automated system was bullet-proof. Throughout Tuesday, Capriles supporters flocked to the streets to contest the result.
The general attorney, Luisa Ortega Díaz, said seven people had been killed during the clashes and another 61 injured, but gave no further details.
Maduro described the opposition's protest as part of a well-orchestrated coup attempt, likening the street protests to similar events that took place 11 years ago during a short-lived coup that ousted Hugo Chávez for two days. "This is the a foretold chronicle of another coup attempt by the extreme right," Maduro said.
Throughout the day the state-run channel VTV broadcast archival footage of the 2002 coup, while warning viewers that the country could be facing similar destabilising efforts led by the opposition.
On Tuesday, during Maduro's first press conference as president-elect, Venezuelans across the country gathered on balconies and rooftops to bang pots and pans, a common form of protest referred to as "cacerolazo".
While the deafening protest took place, Maduro reported from Miraflores, the presidential palace, that the homes of several government officials had been attacked. He also showed pictures of what appeared to be burning tyres in front of several headquarters of the government party, PSUV, in smaller cities.
Images broadcast on Globovision, an opposition channel, showed tens of thousands of people gathered outside the CNE offices in Merida, while tanks guarded the fringes. Similar images were coming from other cities around the country.
Capriles has asked Venezuelans to peacefully gather at the local headquarters of the CNE to demand a total vote recount.
He has also called for a massive march for Wednesday.
Maduro is scheduled to be sworn in this Friday.

Nicolas Maduro waves to supporters at a campaign rally, April 6, 2013.
credit - The Nation
Venezuela's opposition make noise against Nicolás Maduro's victory
Election loser Henrique Capriles calls off march in favour of pots-and-pans protest as both sides trade accusations
by Virginia Lopez in Caracas
April 16, 2013
The Guardian (UK)
Venezuela's opposition leader, Henrique Capriles, has called off the march he planned to lead to the headquarters of the National Electorate Council to demand a total recount of Sunday's electoral vote which gave Nicolás Maduro, Hugo Chávez's hand-picked successor, a razor-thin margin.
The announcement came after President Maduro banned the opposition march from entering Caracas. He denounced the two-day anti-government street protests as part of a US-led coup attempt reminiscent of the April 2002 coup that saw Chávez ousted from power for two days.
"That march will not enter Caracas. It is my responsibility as president not to allow this march - I am defending them from themselves," Maduro said from the headquarters of the state-run oil company PDVSA. "While we conducted a campaign within the principles established by our constitution, they [the opposition] waged an electric warfare, an economic warfare."
He added: "We have proofs of a US-led plot."
The march was called by Capriles after Maduro was proclaimed president on Monday without the manual recount previously agreed by both candidates. It is to be replaced with nightly cacerolazos, a popular form of protest where pots and pans are banged for hours on end.
Capriles, who accused the government of planning to infiltrate tomorrow's march to generate street violence, had made frequent complaints about unfair conditions during the campaign. His objections included Maduro's use of state resources for campaigning purposes and his unlimited air time in the state-controlled media. 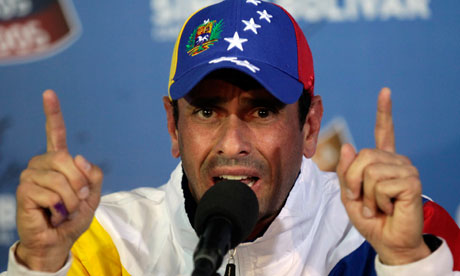 Opposition presidential candidate Henrique Capriles has called off the planned opposition march in Caracas.
credit - The Guardian / Ramon Espinosa/AP
"[The government] are trying to hide the undeniable - people's discontent at all the abuse that's happened," Capriles said. "Our request has not been to change the results. Our petition is to have a vote-by-vote count." He said he would honour the results of a total recount.
Both camps made references to the April 2002 coup where Chávez returned to power after being ousted for two days following a deadly clash between protesters and government forces.
"A group of Venezuela's fascists is trying to subvert the order just like they did on 11 April [2002]," said Diosdado Cabello, the president of the National Assembly, adding that the street marches and nationwide protests were a replay of the "carmonazo", the attempt to establish a transitional government following the coup.
In one of a series of nationwide televised broadcasts, Maduro claimed the opposition had set in motion a US-backed coup against his government which had included boycotting the country's electric system during the 10-day campaign and more recently failing to recognize the elections' results.
Maduro, who was endorsed by Chávez before the former president died of cancer last month, had a 14-point lead at the beginning of the campaign but by the time he won two weeks later this had fallen to a 1.6 margin.
The sharp drop in what many had predicted would be a comfortable victory was seen by analysts as a result of the disillusionment of Chávez supporters dissatisfied with the country's frequent power outages, looming economic crisis, chronic food shortages and soaring crime rate.
As the country seemed set for a major political crisis, Néstor Reverol, the minister of defence, said 12 people armed with mortars seeking to destabilise the country had been detained. Reverol warned that no acts of vandalism would be tolerated.
"We are obliged to exercise the legitimate authority that our laws confer upon us," Reverol said. "We will not allow one millimetre of destabilising efforts."
Capriles reiterated that he had called for peace to be maintained and emphasised that all he wanted was a recount of the votes.
"The country needs calm, and that we know that we can exercise our rights without violence," Capriles said from his party's headquarters. "We are asking that votes be counted one by one. That an audit of this process exists."
The post-election crisis has left seven dead and more than 50 people wounded across the nation as pro and anti-government protestors clashed outside CNE headquarters in different states.
The close margin prompted a call for reflection from leaders on Maduro's side, but Capriles insisted the government "was not reading the results". "They don't have the majority, we have two halves. And this isn't about one half running over the other one, This is about the two halves seeking out a solution so the country can move forward."
But as Maduro addressed the nation, Venezuelans across the nation took to their balconies and rooftops to show their discontent with a clatter of pots and pans.
"The town I live in is tiny and the opposition doesn't have any force. Yet the pots can heard loud and clear," said Marisa Bello from Elorza, a town of 24,000 people in the flatlands of Venezuela.