Henry Kissinger's quote recently released by Wikileaks, "the illegal we do immediately; the unconstitutional takes a little longer," likely brought a smile to his legions of elite media, government, corporate and high society admirers. Oh that Henry! That rapier wit! That trademark insouciance! That naughtiness! It is unlikely, however, that the descendants of his more than 6 million victims in Indochina share in the amusement. 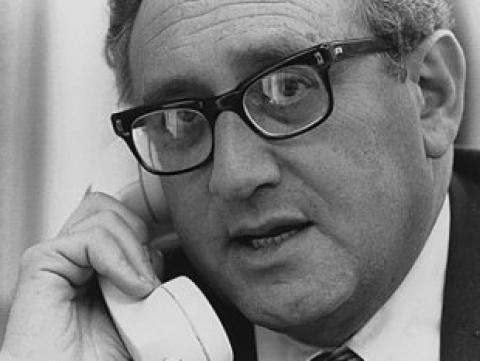 Henry Kissinger's quote recently  released by Wikileaks, "the illegal we do immediately; the unconstitutional takes a little longer," likely brought a smile to his legions of elite media, government, corporate and high society admirers. Oh that Henry! That rapier wit! That trademark insouciance! That naughtiness! It is unlikely, however, that the descendants of his more than 6 million victims in Indochina, and Americans of conscience appalled by his murder of non-Americans, will share in the amusement. For his illegal and unconstitutional actions had real-world consequences: the ruined lives of millions of Indochinese innocents in a new form of secret, automated, amoral U.S. Executive warfare which haunts the world until today.

And his conduct raises even more fundamental questions: to what extent can leaders who act secretly ,illegally and unconstitutionally, lying to their citizenry and legislature as a matter of course, legitimately claim to represent their people? How much allegiance do citizens owe such leaders? And what does it say about America’s elites that they have honored a man with so much innocent blood on his hands for the past 40 years?

Mr. Kissinger's most significant historical act was executing Richard Nixon's orders to conduct the most massive bombing campaign, largely of civilian targets, in world history. He dropped 3.7 million tons of bombs** between January 1969 and January 1973 - nearly twice the two million dropped on all of Europe and the Pacific in World War II. He secretly and illegally devastated villages throughout areas of Cambodia inhabited by a U.S. Embassy-estimated two million people; quadrupled the bombing of Laos and laid waste to the 700-year old civilization on the Plain of Jars; and struck civilian targets throughout North Vietnam - Haiphong harbor, dikes, cities, Bach Mai Hospital - which even Lyndon Johnson had avoided. His aerial slaughter helped kill, wound or make homeless an officially-estimated six million human beings**, mostly civilians who posed no threat whatsoever to U.S. national security and had committed no offense against it.

There is a word for the aerial mass murder that Henry Kissinger committed  in Indochina, and that word is “evil”. The figure most identified with this word today is Adolph Hitler, and his evil was so unspeakable that the term is by now identified with him. But that is precisely why it is important to understand the new face of evil and moral depravity that Henry Kissinger represents. For evil not only comes in the form of madmen dreaming of 1000 year Reichs. In fact, in our day, it is more likely to be committed by sane, genial and ordinary careerists waging invisible automated war in far-off lands against people whose screams we never hear, whose faces we never see, and whose deaths go unrecorded and unnoticed. It is critical to understand this new face of evil, for it threatens not only countless foreigners but Americans in coming years. And no one has embodied it more than Henry Kissinger.

The planes he dispatched came by day. They came by night. Remorseless. Pitiless. Relentless. Day after day, week after week, month after month, year after year. Most of the people below had no idea where the bombers came from, why their lives had been turned into a living hell. The movie "War of the Worlds", in which Americans are incomprehensibly slaughtered by machines is the closest depiction of what the innocent rice-farmers of Indochina experienced.

Hundreds of thousands of innocent human beings in Laos, Cambodia and Vietnam were forced to live in holes and caves, like animals. Many tens of thousands were burned alive by the bombs, slowly dying in agony. Others were buried alive, as they gradually suffocated to death when a 500 pound bomb exploded nearby. Most were victims of antipersonnel bombs designed primarily to maim not kill, many of the survivors carrying the metal, jagged or plastic pellets in their bodies for the rest of their lives.