Rachel Boynton has created a film that takes an expansive, yet focused, look at how oil makes its way from deep in an ocean off the coast of Ghana to the U.S. stock exchange, and the ensuing complications. The film explores the connections between the Ghanaian company who finds the oil field, the small Texas oil company who drills, the Wall Street private equity partners who invest, and the Ghanaian government officials who manage the contracts. 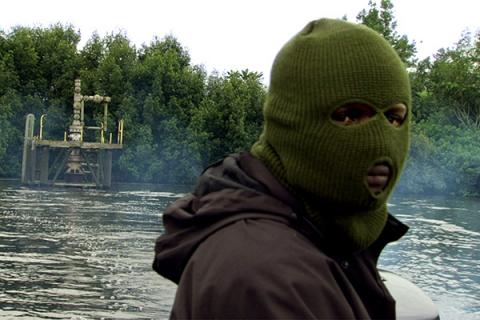 Masked Militant in front of an oil well in 'Big Men.' , Jonathan Furmanski

When Rachel Boynton first went to Africa to research her documentary Big Men, which premiered this week at the Tribeca Film Festival, she had three unrelated phone numbers. Six years later, she had a film that takes an expansive, yet focused, look at how oil makes its way from deep in an ocean off the coast of Ghana to the U.S. stock exchange, and the ensuing complications.

The film explores the connections between the Ghanaian company who finds the oil field, the small Texas oil company who drills, the Wall Street private equity partners who invest, and the Ghanaian government officials who manage the contracts. The glitch, depending on your seat, comes when Ghanaian leadership changes, the justice department is called in to investigate allegations of corruption on the part of the U.S. firm and credit contracts due to the financial crisis.

The film’s backdrop is the increasing violence in Nigeria, where militants are stealing from and blowing up foreign gas pipelines in an effort to siphon off profits from the corrupt Nigerian government who isn’t sharing the riches. The doc simultaneously looks at the process and implications of western companies investing in foreign oil ventures, profiles an African country trying to profit after centuries of exploitation and watches as everyone navigates how to slice the billion-dollar pie.

Boynton also looks at the psychological motivations for the individual players, all striving to be masters of the universe, or in West African parlance, "big men." Rolling Stone spoke with Boynton about her cautious optimism for Ghana, the legacy of Milton Friedman and working with Brad Pitt and Sebastian Junger.

How did you become interested in oil and this particular topic?
In 2006, when I started making the film, oil prices were really, really high. You couldn’t turn on the TV without hearing about the price of oil. You couldn’t pick up a newspaper without seeing it in the headlines. I’d just made this movie that was about democracy and marketing, called Our Brand is Crisis, and I knew I wanted to make another film with big ideas and big questions about the way the world works. Oil is the most important resource on the planet, and I had never seen a movie that really looks at the question of what happens when the most valuable resource on the planet is found in one of the poorest places on the planet.

You open the film with a quote from Milton Friedman about greed. What does that quote mean to you in connection with this story?
Well, I start with two quotes. Milton Friedman, when he talks about greed, he is talking about it as the engine in society, he is talking about it as greed is good. It motivates our economy and it motivates our society. I felt very strongly that you needed another quote after that to balance out that attitude, because there is a cost, there is a price. Basically he was Mr. Individualism. But at a certain point you also have to think about how we are all connected to each other, and what the price of an over-emphasis on maximum individual profit might be. The second quote is a quote from The Treasure of the Sierra Madre. It’s about these guys who go looking for gold and it destroys their relationship. I think of the movie as a modern day Treasure of the Sierra Madre with real people and access over the course of six years.

It also becomes clear that Ghana pushing back on foreign companies in an effort to correct centuries of imperialism and exploitation, and although this causes problems for western powers, the Ghanaians are really just trying to right their own ship.
Absolutely. The fundamental question in the movie is who gets what out of the deal and so then the question is whom is pitted against whom in the deal. You’ve got private capital – Wall Street – you’ve got the oil company, you’ve got governments and you’ve got the people. And those are the principal entities looking to get a piece of the pie.

You explore the fallout from oil exploration in Nigeria. Do you think that the same thing could happen in Ghana?
Well sure. The same thing can happen anywhere where oil is discovered. But I’m cautiously optimistic about Ghana. They are asking for advice from all sorts of people and there is really a vibrant press there, and people who are asking questions of the government, watchdogs basically. The problem is there is just so much money involved. And there’s just a lot of practical things that need to be addressed, like you have to teach your ministry of finance how to do the accounting properly. I’m optimistic about Ghana but there is a danger that it could become Nigeria, just as there is a danger that anywhere where a massively valuable resource is found can become a hotbed for corruption.

But this seems like an ongoing issue in international development, are there any proactive measures that can be taken?
There are certain groups for example, Revenue Watch or EITI, that have initiatives called 'Publish What You Pay' where they are encouraging oil companies to publish how much money they pay in any country, so the people can hold governments accountable for how much money they get. The movement for transparency is a big help. But that question doesn’t address the question of the division of profit between the country and the company and what is a just and right distribution of profits. To me this isn’t just a movie about Africa, or what is going to happen in Ghana, it is also a movie about how New York and Texas are connected to these places.

It seems like everyone is trying to be the "big men," the Texas landmen, the Nigerian militants, the Ghanaian people, the politicians. . . .
The tag line on the poster is 'Everyone wants to be big.' And it’s funny because the term 'big man' or 'big men' is a very common term in Nigeria and in Ghana. There it’s an every day phrase. But it’s not just everyone in Nigeria or everyone in Ghana. It’s Milton Friedman. Everyone wants to be big, everyone wants more for his own people. And so then the question becomes how do we define who our own is?

I found the story of the man who originally discovered the oil to Ghana to be really heartbreaking. He wanted the recognition so badly and wasn’t getting it.
It is interesting when you think about the movie, when you think about what makes someone big, it’s money and it’s reputation. Both of those things, they get mentioned over and over again. And they are linked but they are not the same thing.

Speaking of big men, Brad Pitt executive-produced the film. What was his involvement?
I was traveling with Sebastian Junger in the Niger Delta, he was writing an article for Vanity Fair, and he had had some correspondence with this guy called Jomo Bomo, who was basically the publicist for the militants. He had written Jomo Bomo saying, hey, can I get access and Jomo Bomo had written back saying, I don’t know who you are, you are out of luck. And then apparently Jomo looked him up on the internet and read about The Perfect Storm. Once he figured out who Sebastian Junger is he said, 'Oh, no problem, I’ll give you access, just give me a signed copy of your book.' So I thought, I need to bring on an executive producer that means something, and I went home and I asked Brad Pitt to executive produce the movie, and he read the pitch and he got really excited.

Do you think you’d see a story like this in Brazil, which has recently developed an oil economy, or is there something about this story that is unique to Africa?
No. The question of corruption is a question everywhere. It is not just about Africa, or Brazil, because everyone wants to be big. And oil money is just so huge. We are talking about billions of dollars. That doesn’t happen very often, and the potential for corruption increases exponentially.