labor Will Portland Parents Side With The Teachers Union? We'll See 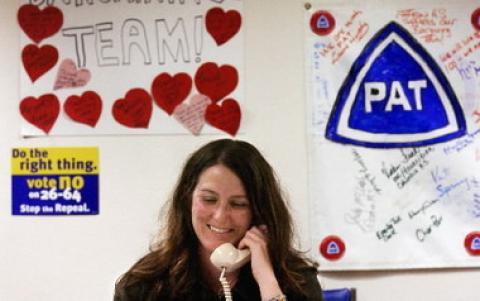 Parents and teachers often work together in Portland. This 2004 photo shows parent Amy Platt at the headquarters of the Portland Association of Teachers, making phone calls to fight the repeal of the Multnomah County income tax.,Stephanie Yao/The Oregonian

Parents and teachers are natural allies, and the Portland Association of Teachers knows it. The high-stakes question now facing Portland is whether this alliance would hold all the way to a strike.

Portland Public Schools and its teachers union began bargaining in earnest late last week when they exchanged proposals to dramatically revise their current labor contract, which expires at the end of June. Union leaders characterized their approach this year as deliberately unconventional: Their proposal reads less like a standard contract than an education manifesto written by your favorite teacher.

We want smaller class sizes, the union says in a six-page preamble. We want more electives for kids! We want every child to have access to a full curriculum that includes music, art, PE, world languages and staffed libraries. We want less time spent on endless standardized testing and more time spent developing the whole child.

This language is pure catnip to Portland parents who have watched schools stripped of color and staff and enrichment. It also may reflect the influence of union president Gwen Sullivan, a personable educator who graduated from Portland schools and has school-age kids. She sought a leadership role because she's distressed to see today's students have far fewer opportunities than she did.

"Bottom line, we just need more teachers," Sullivan said last week. And on a recent panel discussion that aired on KBOO, she explained, "I'm just fighting to get some of the things that I had."

With this strategy, the teachers could handily win the public-relations battle. The union frames its priorities in terms that connect with parents and workers, while the district speaks the management lingo of controlling compensation costs and strengthening its authority as employer. (In a pro-labor city like Portland, the teachers union is you, and the district is Mitt Romney.) The union automatically wins the political upper hand.

These factors help explain why the union is pushing such a bold agenda this spring, trying to rewrite an already legendary contract to include pay raises, sweeping new protections for teachers and tough new rules around class size, standardized tests, teacher evaluations and workload. The effort could succeed -- but it could also royally backfire.

Here are the union's top two vulnerabilities, on top of the political risk of seeking more money.

First, parents might look at the fine print of the union's current and proposed contracts and see provisions that are anti-student. They would discover restrictions that make it very difficult and laborious for principals to adjust the curriculum, evaluate teachers, build a staff or exercise minimal oversight.

The arbitrator who set limits on teachers' workload and students' classes last year also said that the district and union are free to agree on new rules at any time. The district wants more high schoolers -- especially ninth-graders -- to be able to experience a school day without mandatory study halls and empty class periods.

The union does, too, but it doesn't think the district has enough money to let students do so without increasing teachers' workloads. So it's saying no to full-time high school, except for students at the highest risk of dropping out.

"The concept is doable, but we don't believe they have the funds," said Marty Pavlik, the union's lead negotiator. "If there were the funding to pay for it, we would be totally in favor."

More arbitration is raging as we speak, functioning as the bargaining behind the bargaining. Meanwhile, the district faces extraordinarily complicated rules for assigning students to classes or interacting with teachers. It struggles to function without tripping a wire and triggering a new grievance.

"It's an extremely dysfunctional relationship we have with the district," Sullivan said in the panel aired on KBOO. "We have people who are being treated horribly."

I don't blame Portland teachers for being fed up with Oregon's rolling education crisis or the slow decline of classroom resources. I don't blame the union, either, for fighting back against bigger classes and more work. That's the union's job.

But Portland parents are fed up, too -- fed up, tapped out and under pressure after a long recession. They're worried about their kids getting the losing end of every deal. They may have no patience this time around for an overly politicized contract, unaffordable demands and new hints about a possible strike.

If so, Portland teachers may get more pushback from parents than they bargained for.