Though the West Chemical and Fertilizer Company hadn’t had a safety inspection since 1985 and had lied to the Environmental Protection Agency about explosives on the property, it will likely and literally get away with murder. 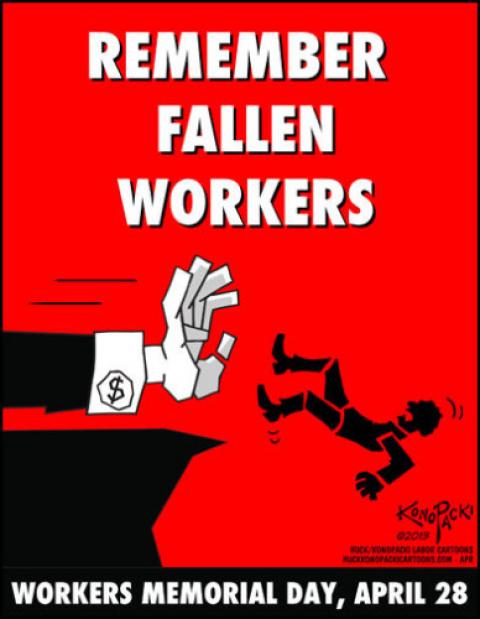 The recent bombing in Boston that killed three people was quickly branded “terrorism.” If convicted, the 19-year-old suspect could face the death penalty under federal law.  In the same week, an explosion at a West, Texas fertilizer plant killed 14 people, including 11 firefighters. Though the West Chemical and Fertilizer Company hadn’t had a safety inspection since 1985 and had lied to the Environmental Protection Agency about explosives on the property, it will likely and literally get away with murder.

In Texas (and, sadly, elsewhere in the US), killing workers for profit is the perfect crime. In 2005 an explosion at British Petroleum’s Texas City refinery killed 15 and injured 170.  Five years later, BP’s offshore drilling rig, Deepwater Horizon, exploded and killed 11 workers. Though BP was fined for both incidents, there were no arrests of those responsible.  Similarly Gulf Stream Marine, which handles cargo at Gulf Coast ports, experienced six fatal accidents from 2007 to 2011. The Occupational Safety and Health Administration (OSHA) found violations in every case but subsequently deleted violations and erased penalties in half of them.

Texas construction workers fare no better. According to Build a Better Texas, a study by the University of Texas: “More construction workers die in Texas than in any other state. One in every five workers surveyed reported suffering a workplace injury that required medical attention. Sixty percent of workers have never received basic safety training, and researchers discovered numerous safety violations on almost every worksite they visited.”   The study also found:

• More than half of surveyed workers earned poverty-level wages. Half had insufficient financial resources to support their families. Low-wage workers were more likely to lack health insurance or workers’ compensation coverage.

• More than one in five workers (22%) didn’t get paid for their work. Half weren’t paid overtime, despite working as many as 80 hours per week.

• Seventy-one percent had no benefits. Seventy-eight percent lacked health insurance. Other workplace benefits, such as paid leave and pensions, were even less common.

• An estimated 41% of construction workers were victims of payroll fraud, misclassified as independent contractors, or paid off the books in cash.

Horrifying facts about the deaths and lives of Texas workers don’t hold near the fascination to Republicans and the business community as the lure of profit in this Wild-West, anything-goes regulatory environment. To them, Texas is a model of prosperity and economic “freedom.” Texas Governor Rick Perry promotes the state on his web site as having “a business climate second to none” with a “reasonable and predictable regulatory structure” and a “hard-working workforce [that] is prepared to meet any need an employer can present.” Republican pols crowed with glee as CNBC dubbed Texas the nation’s most business friendly state. Rep. Joe Barton said it was “proof that policies in the Lone Star State are working!” And after the last election, the notorious government-drowning Grover Norquist cheerfully chirped that GOP-controlled state governments “can move to become Hong Kong or Texas as quickly as they want to.”

Wisconsin is one of those states in the GOP’s grip. Do we want to be Texas, with the lowest rate of unionization, the highest income inequality and the worst working conditions in the US?  Do we want to be Hong Kong, a former British colony, now part of China where democracy and independent unions are prohibited and workers commit suicide rather than face another excruciating day of overwork and exploitation?  In short, do we want to be the GOP ideal: a corporate-dominated one-party state where working people are crushed by the wheels of industry in its headlong pursuit of profit?

April 28 is Workers Memorial Day, a day to bow your head and observe a moment of silence for the more than 4,500 human beings who are killed in American workplaces each year.  Be thankful that you are not one of them—yet.  Make a pledge to do what you can to ensure that you and your fellow workers not only survive but thrive in your jobs.  Labor activist Mother Jones said it best: “Pray for the dead and fight like hell for the living.”