Different Seasons of the Arab Spring

Reports from Morocco and Tunisia 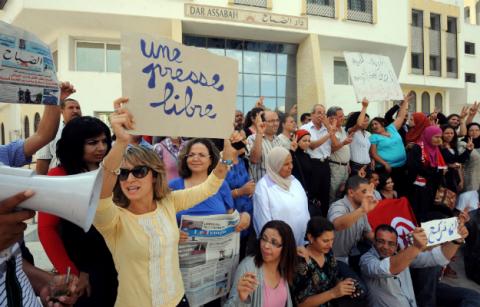 In northern Africa, winters are usually mild and summers normally dry and hot. The glorious Arab Spring revolts in this part of the world can also be measured in this same way – sometimes hot, in fact, blazing hot; sometimes warm; sometimes mild and sometimes just plain dry.

The full range of contrasts were on display as several Moroccan and Tunisian trade unionists shared their political experiences at a April 22 public meeting sponsored by the San Francisco Labor Council, AFL-CIO.

Of course, Tunisia, with a population of just over 10 million, was the first very hot example of a massive popular movement toppling one of the region’s longest-reigning and most corrupt dictators. Following a month of burning protests, President Ben Ali, with pockets full, fled to Saudi Arabia on January 14, 2011.

My country will forever be known as the “birthplace of the Arab Spring” one of the Tunisian union leaders, Habib Rjeb, proudly proclaimed.

“Women were at the front of these demonstrations and now we have a parliament with 50 percent women,” labor official Ahmed Dhifalli followed up.

“Young people opened their chests to bullets! Fear was taken out of our hearts! Corruption, being ruled by one person, by one family, by one tribe, the media and judiciary being controlled, the southern and midwest parts of our country being marginalized, a 24 percent poverty rate, education, healthcare and our culture diminished, forged and faked elections – all these factors led us to revolt,” he emotionally declared.

The final tally was 300 killed and 3000 wounded during the insurrection.

Dhifalli is among the leadership of the 500,000 member Tunisian trade union federation, UGTT, that primarily organized the revolt. Ultimately, the UGTT conducted a successful general strike that paralyzed the whole country.

The dictator and his family who controlled 40 percent of the economy were forced out said the Tunisian unionists, their faces still beaming with obvious great pride and satisfaction.

“Our civilization is 3000 years old and yet we are told by some in the West that we are not ready for democracy. Well, we showed the whole world that Tunisians and all Arabs will fight for the democracy we deserve,” Dhifalli concluded.

But in Morocco, there has been a much different, more lukewarm experience. There, a constitutional monarchy under King Mohammed VI retains power after ceding in the last two years some of his political discretion to the parliament and after granting wage concessions to workers, all designed to forestall the revolutionary Tunisian example crossing the border.

So far, his strategy seems to have worked.

In the wake of the Tunisian January 14, 2011 ouster of Ben Ali and the subsequent overthrow of Egyptian dictator Hosni Mubarak only a few weeks later on February 11, Moroccan political activists formed the February 20 Movement for Change.

There was lots to complain about for sure.

Most reports place the king’s wealth at around $2.5 billion in a country that produces an annual income of only $4000 per capita. Agriculture involves 40 percent of the workforce and it is these rural workers who suffer the most.

But workers in the cities who are more organized and better compensated also face severe challenges.

According to a 2012 report by the International Trade Union Confederation, “Trade union freedoms are heavily curtailed in practice [and strikes] are often repressed by employers and the authorities.”

Nonetheless, despite the rather harsh conditions and lack of genuine democracy gauged by the new revolutionary standards of the Arab Spring, the February 20 Movement’s original demands sought only limited reforms.

The February 20, 2011 Al Jazeera quotes Mustapha Muchtati of the Enough group that helped organize the protest of several thousand in Morocco on that day. He explains their political approach this way: “This is a peaceful protest to push for constitutional reform, restore dignity and end graft and the plundering of public funds.”

As the reader may recall, in an atmosphere of repression, cautious first steps of limiting demands to ending police brutality and eliminating corruption was also the initial approach of the Egyptian Freedom and Justice movement. No mention of getting rid of Mubarak was made in the first few days of protests that began on January 24, 2011.

Unfortunately, however, since its modest beginnings were bravely unfurled on February 20, 2011, the Moroccan reform movement has stalled.

Samia Errazzouki, a Moroccan-American writer and researcher based in Washington, DC and co-editor of the popular ezine Jadaliyya’s Maghreb page, summed up the last two years experience of this movement and reminds us again of its modest initial demands.

She writes in the March 7, 2013 Al Jazeera webpage: “Two years have passed since a group of Moroccans began spreading calls for a popular protest movement, demanding reforms and socioeconomic betterment. Through understanding…a country where support for the monarchy is widespread, members of the movement in its earlier moments were strategic in their demands: slogans emphasized reforms, chants focused on basic needs and rights…”

The audience member challenged the speaker to explain why the unions did not support protests in the last two years which, he stated, “have been violently repressed as shown in numerous unofficial videos appearing on the internet.”

This sparked an instant and heated response.

“We supported the February 20 movement in all ways,” Gamhor insisted. “We both praised and sponsored the protests. But all our demands were met 100 percent. The videos of violence you saw do not reflect what really happened. In fact, we made real gains in wages and democratic rights. We have a new parliament, for example, and, therefore, do not want to sponsor destruction” nor support unnecessary demonstrations.

When I asked why the unionists from Morocco reacted so firmly to his questions, the young man told me with a simple shrug, “because they support them [the government].”

Clearly, the exchange revealed deeply unsettled political issues that must continue to be debated and discussed inside this proud country of 32 million.

The same can be said of Tunisia where protests have restarted against the government’s failure to enact meaningful reforms. Here, the UGTT remains “independent of the all political parties. We are not sponsored nor funded by them,” Dhifalli emphasized to me.

A negative result of this policy, some critics claim, is that the union confederation remains too far outside the political process, leaving important government issues to other social forces.

I asked another veteran Moroccan unionist about these criticisms.

“Yes, we can definitely say the transitional government has failed us even though there have been increases in pay rates as a result of new protests. Nonetheless,” he insisted, “we have no politics as a confederation though some individual unions may participate in supporting various parties.”

“The main task now,” he strongly emphasized to me, “is to get new elections which are sure to come.”

Of course, this begs the question again of how much influence the critically important UGTT and other working class organizations that made the revolution will have on these elections and on the whole nation building process.

These critical and hotly debated issues are not unique to Tunisia and Morocco. Nor is the passion displayed by the international guests so different from us.

Tim Paulson, executive director of the San Francisco Labor Council, received loud applause when he rose toward the end of the discussion to thank the “honored guests for their comments and for their solidarity.”

“And I have just one comment myself,” Paulson added. “In our country, there are basically two major parties. One that seeks to absolutely destroy the trade unions and,” pausing briefly to take in the applause and knowing nods from the audience and panelists both, “another party that just doesn’t give a damn.”

Immediately following these comments, Labor Council president Mike Casey rose in agreement to emphasize “and both are financed by the corporations.”

The room exploded in support of this succinct summary of the common problems faced and the meeting ended on this note for continued international dialogue and support.

Carl Finamore is Machinist Lodge 1781 delegate to the San Francisco Labor Council. He can be reached at local1781@yahoo.com