When the votes were tallied at the NLRB regional office in Oakland yesterday, NUHW support in Kaiser’s largest bargaining unit had increased by 15 percent—but SEIU, the vocal opponent of striking, won again with 18,844 votes versus NUHW’s 13,101. (Another 334 workers chose no union.) 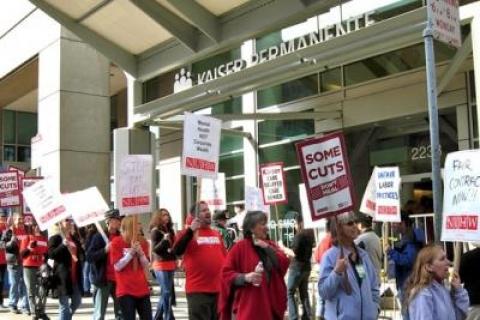 Thirty-one months ago, when the Service Employees International Union first defeated the National Union of Healthcare Workers in a unit of 45,000 service and technical workers at Kaiser Permanente in California, SEIU leader Dave Regan proclaimed that “NUHW is now, for all intents and purposes, irrelevant.”

That obituary proved a little premature. Rank-and-file supporters of NUHW remained alive and kicking, not only at Kaiser but also in other healthcare workplaces around the state. Using member-based internal and external organizing methods now abandoned by SEIU in California healthcare, NUHW largely bucked the tide of concession bargaining nationwide in nearly 20 new units composed of previously unorganized workers or SEIU defectors.

When the votes were tallied at the NLRB regional office in Oakland yesterday, NUHW support in Kaiser’s largest bargaining unit had increased by 15 percent—but SEIU, the vocal opponent of striking, won again with 18,844 votes versus NUHW’s 13,101. (Another 334 workers chose no union.)

With strong financial backing from its new affiliation partner, the California Nurses Association, NUHW has been gearing up since January for a re-run of the National Labor Relations Board (NLRB) election at Kaiser. SEIU had won the first round in October 2010 with 18,290 votes to NUHW’s 11,364.

A major theme of the NUHW-CNA campaign this year was the need to resist SEIU’s damaging contract concessions to Kaiser and other hugely profitable California hospital chains. To back up their own anti-concessions stance, NUHW and CNA members at Kaiser conducted two of the four largest strikes in the U.S. since 2011. During both of these statewide walkouts, SEIU urged its followers to ignore the picket lines set up by unions that don’t participate in the “Labor-Management Partnership” (LMP) led by SEIU.

For hundreds of Kaiser LMP participants headed toward the Disneyland Hotel in Anaheim for a big weekend meeting in the Magic Kingdom Ballroom (located in the hotel’s Fantasy Tower), SEIU’s victory yesterday was good news indeed.

Delegates to that fun-filled confab are scheduled to discuss “the future of unions and health care partnerships” with speakers like multi-millionaire Bernard Tyson, the incoming Chairman and CEO of Kaiser, who will offer “his view of partnership and how it can become a strategic differentiator for Kaiser” as the health care chain “face[s] the demands of health care reform.” (See the full agenda here.)

Another keynoter earlier today was Dave Regan, whose post-election statement deplored the amount of money being spent on inter-union competition at Kaiser “at a time when unionization is down to 7 percent in the private sector.” According to Regan, “it’s time for people like the leaders of NUHW and CNA, who call themselves ‘progressives,’ to focus on organizing non-union workers instead of attacking people who already are in a union and have the best contract in the country.”

Meanwhile, hundreds of Kaiser workers who gathered at the NLRB to observe the vote count or await the outcome a few blocks away at CNA headquarters were definitely not pleased with the results. Most were off the job, at their own expense, or came after work on their own time. Yet, when the trend in favor of the incumbent union became clear, the previously planned and hoped-for victory party in downtown Oakland didn’t dissolve into tears.

Instead, the roomful of red T-shirt wearers began an impromptu rank-and-file speak-out about how a militant minority of Kaiser workers, still trapped in a management-oriented union, could continue their struggle to replace it with something better. As posed by one NUHW activist, the question facing everyone was “what are we going to do tomorrow?”

“We were hopeful this time would be different than last time,” said Roberto Alvarez, a 17-year Kaiser X-ray technician from southern California. “In Orange County, we tripled the support for NUHW, so it was a great leap forward for us there. We know what the future is with SEIU, so what we have to do now is keep on fighting.”

That future, according to Alvarez and others interviewed yesterday, will include further deterioration of working conditions, weak enforcement of the “best contract in the country,” and, at some point, major SEIU give-backs on pensions, job security, and medical coverage for active employees. These takeaways have already been won by Kaiser competitors like Dignity Healthcare and Daughters of Charity Health System.

“My theory is that SEIU has promised Kaiser a lot of stuff, cuts that are coming down sooner or later, now that the election is out of the way,“ Alvarez said.

The usual rank-and-file strategy for resisting concessions and trying to change the direction of a union calls for replacing the existing leadership. Elect new stewards, bargaining committee members, and local officers willing to put up a fight.

But NUHW supporters believe there are few opportunities to do that within the SEIU structure, given the experience of workers at Kaiser and other California hospitals when they tried to reform SEIU nationally in 2008. That effort led to the ouster of all their elected officers. Their statewide local, United Healthcare Workers, was put under trusteeship and hundreds of key workplace leaders resigned or were removed as shop stewards and Kaiser “contract specialists.”

The strong union activists sidelined by this SEIU coup helped sustain, and have now added to, NUHW’s shop floor support, as reflected in the latest vote count. In some facilities, their network has majority support and could wrest bargaining rights away from SEIU if petitioning for decertification elections at individual Kaiser hospitals was legally possible.

Since 2010, these “member organizers” enabled NUHW to win bargaining rights for 4,000 Kaiser workers in smaller professional and technical units who could switch unions more easily. All are still engaged in protracted negotiations with Kaiser, which has stonewalled NUHW to give its larger union rival a significant campaign issue: it became an SEIU talking point that all NUHW does is fight the boss, never win a contract.

NUHW backers’ deep estrangement from SEIU is obviously not yet shared by enough of their co-workers, who again opted for the security of the status quo rather than the perceived risk of changing unions.

“There was no way NUHW or CNA could convince us to give up our great wages, health coverage, pension and job security, especially since NUHW has been unable to bargain a contract at Kaiser for more than three years,” said Cleto Delizo, a Kaiser worker from Sacramento quoted in a SEIU’s post-election press release. “This is now settled, once and for all, and we are ready to give all of our attention to doing our jobs providing the best possible care to our patients.”

NUHW-CNA organizers believed they had made greater progress overcoming SEIU’s campaign of strike-baiting and fear-mongering about the challenges of restarting negotiations with Kaiser under a more militant union banner. The change of union would have meant beginning negotiations right away, though the old contract terms would have remained in effect during bargaining. It is two years before the current SEIU-Kaiser agreement expires.

Pre-election assessments, done systematically and in multiple ways by NUHW-CNA supporters, showed 18,000 to 19,000 workers ready to vote against SEIU this time, an estimate that proved to be off by more than 5,000.

In a post-election message to NUHW supporters, union president Sal Rosselli said he was “stunned by these election results.” NUHW’s post-election statement applauded the courage of its thousands of supporters who stood up against “fear, intimidation, and collusion with management” and “voted for change in a tough economy.”

Some CNA activists predict that Kaiser may now feel emboldened to intensify its current “offensive against nurses” in the run-up to their contract negotiations next year. Already, one CNA rep reports, RNs face daily hassles over Kaiser’s unilaterally imposed and punitive attendance policy, plus increased workloads due to understaffing.

However, CNA believes the widespread activity of its 17,000 members among Kaiser service and technical workers provided a kind of “boot camp” for building their own 2014 contract campaign. “Nurses gained far greater unity among themselves to fight Kaiser than any bargaining prep would offer,” CNA Executive Director RoseAnn DeMoro observed. “We have always needed worker solidarity to defeat the corporate agenda.”

The “unity across classifications” forged at Kaiser during the latest round of NUHW-CNA resistance to the LMP is not without its fault lines. But, according to Rosselli, “that unity is not going away. It will persist in our workplaces, in the friendships we’ve made, and in the continued affiliation between NUHW and CNA. It will fuel our continued struggle to stop the cuts that Kaiser is trying to force down our throats with the shameful complicity of SEIU-UHW.”

Pursuing a “minority union” organizing approach, while awaiting the next decertification election “window period” when SEIU’s contract with Kaiser expires in 2015, will require a further commitment of resources by the CNA. According to an April 29 Wall Street Journal report, CNA financial backing for NUHW this year totaled $4 million—on top of $2 million in loans made to the new union when it was founded in 2009.

SEIU’s Regan acknowledged yesterday that his union spent $4 million to $5 million to retain its bargaining rights, and claimed that CNA devoted $8 million to its losing effort at Kaiser.

The smaller number of organizers assigned to assist NUHW supporters, on a continuing basis, will have plenty to do, as will the hospital-level committees that must now shift their focus from the demands of NLRB electioneering to day-to-day organizing around workplace issues.

“We’ve got to stay organized, support each other, and remain defiant,” said George Wong, who works for Kaiser in San Francisco. “There’s going to be another day, and the fight will continue—because it has to.”

Steve Early worked as a union organizer and negotiator for the Communications Workers of America for 27 years. He is the author of The Civil Wars in U.S. Labor, from Haymarket Books, which recounts earlier rounds of health care union conflict in California. He can be reached at Lsupport@aol.com.