'the only ones not benefiting in any shape, way or form are the homeowners.” 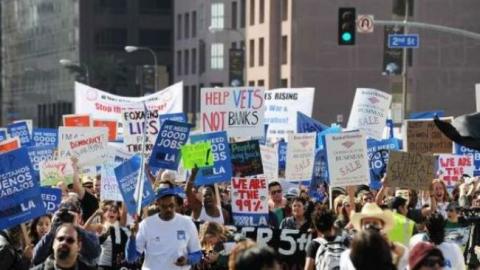 Upset with Wells Fargo’s foreclosure practices, protesters held a demonstration on May Day that briefly shut down one of the bank’s branches in downtown Los Angeles.

The action was organized by Occupy Fights Foreclosures, an Occupy Los Angeles subcommittee that has been assisting homeowners fight what they consider are fraudulent foreclosures. About 80 activists, which included foreclosed homeowners, stood in front of the bank’s entrance for a half hour before joining the nearby May Day demonstration held by the Southern California Immigration Coalition.

“Too many families are being thrown out into the streets,” said Carlos Marroquin, an organizer for Occupy Fights Foreclosures. “Wells Fargo has already paid over a billion dollars in settlements because of their predatory lending practices. It goes to show you that they are not ashamed of what they do.”

In February of last year, five of the largest mortgage servicers, which includes Wells Fargo, paid $25 billion in a settlement over fraudulent foreclosure practices. The lawsuit was initiated by 49 state attorneys general. The settlement was the largest of its kind in U.S. history.

However, Wells Fargo’s foreclosure practices continue to generate criticism. Last month,  ABC News reported that Delores Dingman, an 80-year-old resident of Tualatin, Oregon, fought Wells Fargo for three years to save her home from repossession. The bank failed to prove Dingman ever missed a payment.

In March, LA Weekly reported that Wells Fargo wrongly foreclosed on Hermosa Beach resident Larry Delassus. The bank was supposed to foreclose on his neighbor, but due to a simple typo, Delassus became involved in an over-two-year battle to save his home from the bank. Despite the error, Wells Fargo continued its foreclosure, eventually gaining possession of Delassus’ home, primarily because he was unable to afford the bank’s fees. On December 19, 2012, Delassus died from heart failure in a Torrence courtroom while listening to his attorney argue his case.

Gary Kishner, a spokesperson for Wells Fargo, told LA Activist that Wells Fargo has a “very strong record” in keeping owners in their homes. He said the bank’s foreclosure rate in California is a little over one percent. In 2009, he said, the bank had provided over 840,000 loan modifications, as well as $6 billion in principal forgiveness.

“Our primary goal is to work with our customers and keep them in their homes,” he said. “We don’t benefit from foreclosures. It costs banks a lot of money to foreclose on a house.”

When asked about loans that are mortgage-backed securities, which are often structured in a way that it is more profitable for a servicer to foreclose on a homeowner, Kishner said in those instances Wells Fargo is “bound by the owner of the loan as to what can or cannot be modified.”

However, according to Pro Publica, “few mortgage deals include such restrictions.”

When asked if Wells Fargo had ever advocated changing a system that often makes foreclosure more profitable for servicers, Kirshner said he was not aware of any such conversations with investors.

Occupy Fights Foreclosures states that it has been able to help many owners keep their homes, often through direct negotiations with banks. Their tougher cases have led to protests where members break into homes, return them to their owners and barricade the houses off from mortgage servicing companies and law enforcement. One such protest in Van Nuys lasted over two months last year before being shut down. Occupiers are still defending a home in East Los Angeles. That protest is in its sixth month. Another such protest, in Altadena, began last month.

Marroquin has worked with Occupy Fights Foreclosures since its inception in late 2011. He calls the foreclosure crisis “the crime of the century.” From his experience, he said the banks are leaving homeowners in the lurch by seizing their homes and selling them to investors for less than what the properties are worth.

“Yet they are refusing to allow the homeowners to stay in their homes,” he said. “That goes to show you that there is profit being made … and the only ones not benefiting in any shape, way or form are the homeowners.”