Researchers are cautiously optimistic that the slowdown in health care spending is here to stay. Two factors potentially contributing to the record slowdown in growth to 3.1 percent during 2007-11: job loss and benefit changes shifting costs to the insured. Other fundamental changes, including less-rapid development of imaging technology and new pharmaceuticals may have led to the majority of the slowdown: 10 year savings may equal $770 billion. 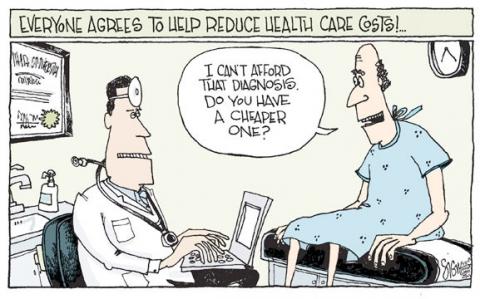 Health Affairs’ May issue, released today, analyzes the recent slowing in the growth of health care expenditures and explores whether the trend will last. The issue also addresses major cost drivers in Medicare and presents proposals for putting the program on a more sustainable path. Another article tracks federal spending on mental health during severe state budget constraints throughout the recession.

As Health Affairs Founding Editor John Iglehart notes on his “From The Founding Editor” page (quoted at length below), the new thematic volume, “Tackling The Cost Conundrum,” continues the journal’s coverage of a topic that has been a “driving theme” of the journal since its inception. The May issue will be discussed at a National Press Club briefing tomorrow morning, Tuesday, May 7. The issue and briefing are supported by a grant from the Robert Wood Johnson Foundation.

Researchers writing in the new issue are cautiously optimistic that the slowdown in health care spending is here to stay. A study by Michael Chernew, Alexander Ryu, and colleagues at Harvard Medical School looks at two factors potentially contributing to the record slowdown in growth to 3.1 percent during 2007-11: job loss and benefit changes shifting costs to the insured. Analyzing National Health Expenditure Accounts and large-employer data, the authors found that benefit design changes that increased enrollees’ out-of-pocket costs were responsible for about one-fifth of the observed decrease in the rate of growth. However, the slowdown occurred even when benefit generosity at large firms was held constant. The authors suggest that other factors are largely responsible and that major events, such as health reform, shifts in payment methodology, and the transformation of the delivery system’s organization may contribute to a longer-term trend of slower spending growth.

In a related article, David Cutler and Nikhil Sahni of Harvard University conclude that fundamental changes, including less-rapid development of imaging technology and new pharmaceuticals, increased patient cost-sharing, and greater provider efficiency, led to the majority of the slowdown in health care spending growth; if this path continues for the next ten years, public-sector health care spending could wind up $770 billion under projections, they write.

Supplemental Medicare coverage is associated with significantly higher rates of overall spending growth over time. In this first empirical study of the issue, Ezra Golberstein of the University of Minnesota and coauthors report that employer-sponsored and self-purchased supplemental coverage were associated with annual spending growth rates of 7.17 percent and 7.18 percent, respectively, compared to 6.08 percent for beneficiaries without supplemental coverage. They used data from the Medicare Current Beneficiary Survey from 1992 to 2005, before Medicare Part D benefits were introduced, and analyzed a sample of 104,365 observations. The researchers found significantly higher rates of spending growth in all supplemental insurance categories compared to the category without supplemental insurance, even while controlling for sociodemographic, disease, disability, and health behavior characteristics. The authors suggest that policy efforts to restrict the generosity of Medicare supplemental insurance plans, and the anticipated lower levels and lower generosity of employer-sponsored supplemental Medicare coverage for future retirees, may have the potential to slow the rate of spending growth for Medicare beneficiaries.

Postacute care led Medicare spending growth from 1994-2009. Amitabh Chandra of Harvard University and coauthors examined spending growth in Medicare for three representative conditions; they found that from 1994 to 2009, postacute care spending per patient for heart attacks more than tripled, for congestive heart failure more than doubled, and for hip fractures doubled during the year following the initial hospital admission. Postacute care services — long-term hospital care, rehabilitation care, and skilled nursing facility care — were also the fastest growing major spending category. Spending at skilled nursing facilities was the largest portion of both the level and growth rate of spending at postacute care facilities. The researchers recommend that policy solutions designed to control Medicare costs, such as the current experiment under the Medicare Bundled Payment for Care Improvement initiative, are more likely to be effective if they include postacute care.

led Volume 1, Number 1 of Health Affairs with a paper that explored “a neoconservative’s vision of how to transform the health system.” Henry Aaron and William Schwartz asserted in 1993 that competitive mechanisms must be combined with global budget limits to effectively check spending. A decade later, Gerard Anderson, Uwe Reinhardt, and colleagues wrote, “It’s the Prices, Stupid: Why the United States Is So Different from Other Countries.”

Another classic offering, an exchange of letters between Reinhardt and Arnold Relman, a former editor of the New England Journal of Medicine, should be read by anyone interested in the future US system and forces that drive its costs, but particularly by aspiring physicians and others who are pursuing careers in health care.

(Please excuse the appearance of portions of the scans from some of our early article.)