A landmark $240 million verdict awarded to 32 mentally disabled Iowa plant workers who were subjected to years of abuse by their handlers will be reduced to just $1.6 million because of a federal cap, attorneys in the case agree. 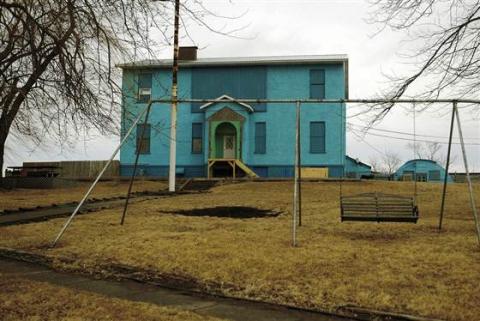 This is the former school near Atalissa, Iowa, that housed mentally disabled men while they worked at West Liberty Foods until Iowa closed down the facility in 2009. The men received a $240 million award that has been slashed to $1.6 million because of a , AP file

IOWA CITY, Iowa -- A landmark $240 million verdict awarded to 32 mentally disabled Iowa plant workers who were subjected to years of abuse by their handlers will be reduced to just $1.6 million because of a federal cap, attorneys in the case agree.

The Equal Employment Opportunity Commission and Henry's Turkey Service agreed in legal briefs filed late Friday that under federal law, each plaintiff can only recover $50,000 apiece — a far cry from the $7.5 million a jury awarded each worker earlier this month. On Monday, one advocate for the men called the cap "grossly unfair."

Each plaintiff will also be entitled to separate back pay averaging around $50,000 under an earlier order in the case finding that they were underpaid by about $1.37 million. U.S. Senior Judge Charles Wolle is expected to enter a final judgment in the coming days.

Jurors found that Henry's, a now defunct Goldthwaite, Texas, company, subjected the men to years of abuse and discrimination at home and at work. Henry's contracted the workers out to the West Liberty Foods turkey processing plant from the 1970s until 2009, and oversaw their care at home and at work.

The men lived in a bug-infested, hazardous bunkhouse in Atalissa, a rural eastern Iowa community several miles from the West Liberty plant, and were subjected to verbal and physical abuse by their Henry's handlers. The plant was not accused of wrongdoing.

State officials shut down the bunkhouse in 2009 and transitioned the men, many of whom needed urgent medical care, into new housing. The EEOC then sued, alleging the men were abused and exploited for profit.

Jurors awarded each man $5.5 million to compensate them for their pain and suffering after a weeklong federal trial in Davenport, and an additional $2 million in punitive damages after finding that Henry's violated their civil rights. It was the largest verdict in the 48-year history of the EEOC and hailed by advocates for disabled workers.

But businesses that employ fewer than 101 employees, such as Henry's, can only be ordered to pay a maximum of $50,000 per worker for compensatory and punitive damages under the Americans with Disabilities Act, EEOC attorney Robert Canino acknowledged in his brief.

"The EEOC, therefore, understands that the amount of damages of $7,500,000 assessed and awarded by the jury to each of the 32 class members, while certainly an appropriate and meaningful measure of the actual harms suffered by these victims of discrimination, including but not limited to, the mental anguish, pain and suffering, and 'loss of enjoyment of life,' must be drastically reduced in order to come within the stringent statutory limits for recovery," he wrote.

Separately, Canino asked Wolle to affirm his earlier $1.37 million order for back pay and add $283,568 for interest. Wolle last year found that Henry's for decades paid the men $65 per month, or 41 cents per hour, regardless of how many hours they worked, after excessively docking their wages and disability benefits for the cost of lodging and care. Meanwhile, in the last few years of their deal, West Liberty Foods was paying Henry's more than $500,000 per year for the men's services.

Each would receive payments of between $34,000 and $54,000, depending on the amount they worked. The law limited their recovery of back pay to two years.

Henry's attorney, David Scieszinski, agreed in a brief filing that each man's recovery would be limited to $50,000 in damages, and did not take a position on back pay or interest.

The drastic reduction in size could make it more likely that Henry's, now defunct, may be able to satisfy the judgment. Canino has said the EEOC will consider seizing more than 1,000 acres of Texas ranchland, which was worth between $2 million and $4 million when founder T.H. Johnson died in 2008 and transferred it to his widow.

Steven Schwartz, a disability rights attorney with the Center for Public Representation in Northampton, Mass., said the reduction in damages was an example of how arbitrary caps lead to "grossly unfair" outcomes in specific cases. While it may reduce the amount of compensation the men receive, he said it did not take away from the jury's assessment of their injuries.

"Terrible things happened to these men. The people who caused it did so intentionally and with an understanding of the consequences. The harm that the men experienced was worth $240 million," he said. "There's no change in that reality, as a judgment of the jurors as to the value of their lives and their bodies and souls."

Schwartz is representing five former Henry's workers in a separate case in which they allege that Texas authorities are failing to offer community-based living alternatives for the disabled. The men are seeking to get out of the nursing home where they reside.