A troubling pattern emerges as private funds seek to profit from beleaguered cities. 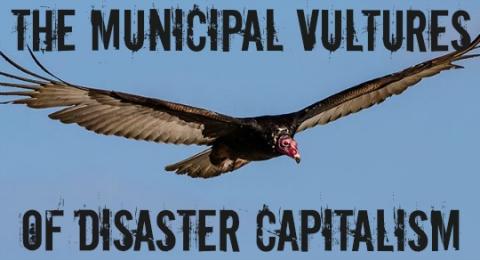 In Detroit, a once bustling city at the center of the US economy, the hedge fund vultures are circling.

But first, a moment of background, employing Naomi Klein's contemporary classic The Shock Doctrine, which tells the story of how purveyors of aggressive capitalism take advantage of crises and public vulnerability in order to push through neoliberal policies and profit-motivated financial arrangements.

Played out in various spheres before and after the book's publication in 2005, the idea of 'disaster capitalism' has been at the center of austerity politics on both sides of the Atlantic (and around the world) in the wake of the 2008 financial meltdown. And now, in places like Detroit, its taking place in US communities at the municipal level as towns and cities hit hard by diminished economies and the slashing of public services are struggling on the edge of bankruptcy.

But, as reporting by Reuters on Wednesday reveals, one city's pain is a possible hedge fund manager's gain.

As Reuters' Tom Hals explains, large private hedge funds, which once preyed on vulnerable companies ripe for liquidation and restructuring, are now taking aim at wounded cities and counties—with no place beckoning "more than Detroit."

This sudden interest in the staid world of municipal debt comes as these so-called distressed funds are looking for new places to put their money. Lucrative corporate bankruptcies have dried up, thanks in part to the Federal Reserve's policy of low interest rates. [...]

But despite the risks, some are already betting hundreds of millions of dollars that there are big returns in cash-strapped governments.

In Detroit, where a previous ploy of the disaster capitalists has already taken hold in the form of an appointed "Financial Emergency Manager"—a position that strips out local government and puts city decision-making into unelected, bureaucratic hands—the people have almost no political avenue to resist the sale of public assets or the manipulation of city debt.

And as Hals notes, "the hedge funds' interest in municipal debt reflects the divergent fortunes of Wall Street and Main Street." He continues:

Distressed debt funds love to jump in when most bail out. But with the coffers of U.S. companies overflowing with cash, there has been a dearth of the debt defaults, bankruptcies and liquidations that such funds normally feast on.

By contrast, a small but potentially growing number of U.S. cities and towns are struggling with pay and pension obligations that they took on in the boom years. As well as Jefferson County, the California towns of Stockton and San Bernardino have recently filed for bankruptcy.

And Detroit's fragile state—and the existence of the city's emergency manager Kevyn Orr—make the city enormously vulnerable and thus attractive to hedge funds.

Detroit was once America's fifth largest city and a thriving center of U.S. industry. Now, its population has plummeted to 700,000 from a peak of 1.8 million, a third live in poverty and basic services such as street lighting have broken down. Michigan Governor Rick Snyder appointed Orr, a corporate bankruptcy expert, in March to take over the city's finances.

Even if the city does not file for bankruptcy, its debt will likely be restructured, providing an opportunity for hedge funds to make a profit. [...]

Financial advisers, restructuring consultants and lawyers who work with the funds have told Reuters they have been fielding calls, digging through documents and even flying to Detroit as they try to pinpoint a profitable investment.

"Everyone is looking for ways into Detroit. It's new and unique," said Marti Kopacz, who founded Brant Point Advisors, which provides turnaround advice to municipal governments.

One of the normally secretive distressed debt fund managers confirmed the funds are circling the Motor City.

But what of the warnings? What does it mean to "liquidate" or "restructure" a city in the same manner you might a failed electronics company or an unprofitable factory?

According to Marti Kopacz, a financial adviser who offers guidance to municipal governments and was interviewed by Reuters for his expertise on the big-money interests circling Detroit: "I think it will be a period of time where the distressed investor community will come to an appreciation that these situations are so very, very different from a commercial bankruptcy," he said.

"Everyone points to the politics but it's even more fundamental than that. If you live in the north you have to take care of the snow and you have to have a police department and a fire department. You can't liquidate a city."

And then, of course, these questions remain: How long will "this period of time" be? And how much damage to the city might be done as the vultures gain "appreciation" whilst snacking on their scrumptious, municipal lunch?