Calling for $15 an hour and the right to form a union without fear of reprisal from their bosses, workers at McDonald's, Burger King, Wendy's, Simply Fashion and Taco Bell in Milwaukee joined their fellow workers who have walked off the job in Detroit, New York City, Chicago and St. Louis in recent weeks.

May 15, 2013 By Ruth Conniff The Progressive
printer friendly 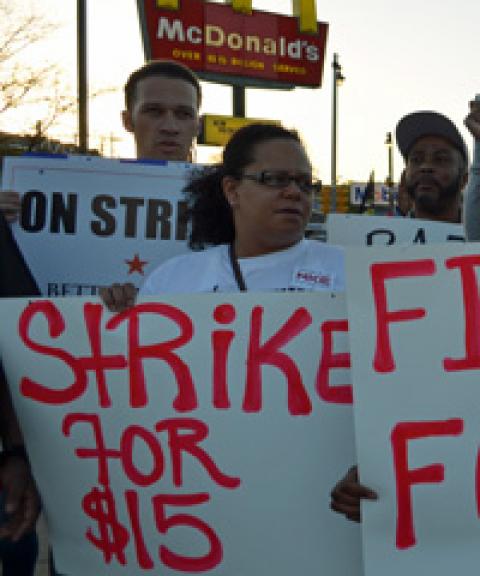 , Photo by Raise Up MKE

On Wednesday, hundreds of workers at Milwaukee fast-food restaurants and retail stores walked off the job to demand fair wages and the right to organize.

"We are incredibly excited about the turnout today," said Jennifer Epps-Addison, economic justice director of Citizen Action of Wisconsin, who estimated that there were about 500 people at a Burger King on 51st and Capitol in Milwaukee, where five workers walked off the job,

Calling for $15 an hour and the right to form a union without fear of reprisal from their bosses, workers at McDonald's, Burger King, Wendy's, Simply Fashion and Taco Bell in Milwaukee joined their fellow workers who have walked off the job in Detroit, New York City, Chicago and St. Louis in recent weeks.

“We’re on strike because we’re tired of struggling just to survive,” Kenneth Mack, a McDonald’s employee said in a statement released by a coalition the Milwaukee Workers Organizing Committee, an indepedent union of low-wage workers. “There is no reason why I should go to work every day and not make enough to take care of myself and my daughter.”

"Workers in Milwaukee have been inspired, especially by what we saw in Detroit last week," said Epps-Addison. "That helped us decide we wanted to go out on strike. We've been following what's going on with low-wage workers across the country using Twitter and FaceBook, which has been great because we've been able to find out what's happening in real time and adjust our plans."

Low-wage jobs, which account for the majority of jobs added during the recent economic recovery nationwide, don't pay enough so that workers can hope to build a reasonable life, the strikers point out.

"We believe $15 an hour is not just a livable wage but a fair wage for the work that they're doing," added Epps-Addison.

The "Raise Up MKE" [2] campaign is a coalition effort by community, labor, and faith-based groups.

Goals include a union drive, a campaign to raise the state's minimum wage, and informing taxpayers about millions of dollars in subsidies to employers who pay poverty wages.

“In the 1960s, Milwaukee workers turned dangerous, low-paying factory jobs into good union careers," the group's press release on today's strike points out. "Unfortunately, those jobs are gone and aren't coming back. Just like our parents and grandparents, we must demand that big corporations stop padding their profits by paying poverty wages. We’re striking because we still believe in a Milwaukee where anyone who is willing work hard, can earn enough to support their family.”

The Milwaukee workers will return to work tomorrow.

"We hope every employer in our city will follow the law and not retailate against them," said Epps-Addison.