Matt Taibbi: Everything Is Rigged

The Illuminati were amateurs. The second huge financial scandal of the year reveals the real international conspiracy: There's no price the big banks can't fix. 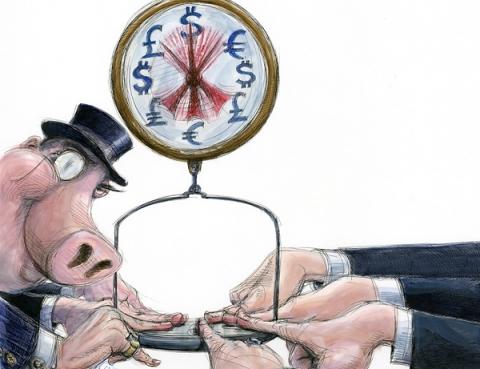 Conspiracy theorists of the world, believers in the hidden hands of the Rothschilds and the Masons and the Illuminati, we skeptics owe you an apology. You were right. The players may be a little different, but your basic premise is correct: The world is a rigged game. We found this out in recent months, when a series of related corruption stories spilled out of the financial sector, suggesting the world's largest banks may be fixing the prices of, well, just about everything.

You may have heard of the Libor scandal, in which at least three – and perhaps as many as 16 – of the name-brand too-big-to-fail banks have been manipulating global interest rates, in the process messing around with the prices of upward of $500 trillion (that's trillion, with a "t") worth of financial instruments. When that sprawling con burst into public view last year, it was easily the biggest financial scandal in history – MIT professor Andrew Lo even said it "dwarfs by orders of magnitude any financial scam in the history of markets."

That was bad enough, but now Libor may have a twin brother. Word has leaked out that the London-based firm ICAP, the world's largest broker of interest-rate swaps, is being investigated by American authorities for behavior that sounds eerily reminiscent of the Libor mess. Regulators are looking into whether or not a small group of brokers at ICAP may have worked with up to 15 of the world's largest banks to manipulate ISDAfix, a benchmark number used around the world to calculate the prices of interest-rate swaps.

Interest-rate swaps are a tool used by big cities, major corporations and sovereign governments to manage their debt, and the scale of their use is almost unimaginably massive. It's about a $379 trillion market, meaning that any manipulation would affect a pile of assets about 100 times the size of the United States federal budget.

It should surprise no one that among the players implicated in this scheme to fix the prices of interest-rate swaps are the same megabanks – including Barclays, UBS, Bank of America, JPMorgan Chase and the Royal Bank of Scotland – that serve on the Libor panel that sets global interest rates. In fact, in recent years many of these banks have already paid multimillion-dollar settlements for anti-competitive manipulation of one form or another (in addition to Libor, some were caught up in an anti-competitive scheme, detailed in Rolling Stone last year, to rig municipal-debt service auctions). Though the jumble of financial acronyms sounds like gibberish to the layperson, the fact that there may now be price-fixing scandals involving both Libor and ISDAfix suggests a single, giant mushrooming conspiracy of collusion and price-fixing hovering under the ostensibly competitive veneer of Wall Street culture.

The Scam Wall Street Learned From the Mafia

Why? Because Libor already affects the prices of interest-rate swaps, making this a manipulation-on-manipulation situation. If the allegations prove to be right, that will mean that swap customers have been paying for two different layers of price-fixing corruption. If you can imagine paying 20 bucks for a crappy PB&J because some evil cabal of agribusiness companies colluded to fix the prices of both peanuts and peanut butter, you come close to grasping the lunacy of financial markets where both interest rates and interest-rate swaps are being manipulated at the same time, often by the same banks.

"It's a double conspiracy," says an amazed Michael Greenberger, a former director of the trading and markets division at the Commodity Futures Trading Commission and now a professor at the University of Maryland. "It's the height of criminality."

The bad news didn't stop with swaps and interest rates. In March, it also came out that two regulators – the CFTC here in the U.S. and the Madrid-based International Organization of Securities Commissions – were spurred by the Libor revelations to investigate the possibility of collusive manipulation of gold and silver prices. "Given the clubby manipulation efforts we saw in Libor benchmarks, I assume other benchmarks – many other benchmarks – are legit areas of inquiry," CFTC Commissioner Bart Chilton said.

But the biggest shock came out of a federal courtroom at the end of March – though if you follow these matters closely, it may not have been so shocking at all – when a landmark class-action civil lawsuit against the banks for Libor-related offenses was dismissed. In that case, a federal judge accepted the banker-defendants' incredible argument: If cities and towns and other investors lost money because of Libor manipulation, that was their own fault for ever thinking the banks were competing in the first place.

"A farce," was one antitrust lawyer's response to the eyebrow-raising dismissal.

"Incredible," says Sylvia Sokol, an attorney for Constantine Cannon, a firm that specializes in antitrust cases.

All of these stories collectively pointed to the same thing: These banks, which already possess enormous power just by virtue of their financial holdings – in the United States, the top six banks, many of them the same names you see on the Libor and ISDAfix panels, own assets equivalent to 60 percent of the nation's GDP – are beginning to realize the awesome possibilities for increased profit and political might that would come with colluding instead of competing. Moreover, it's increasingly clear that both the criminal justice system and the civil courts may be impotent to stop them, even when they do get caught working together to game the system.

If true, that would leave us living in an era of undisguised, real-world conspiracy, in which the prices of currencies, commodities like gold and silver, even interest rates and the value of money itself, can be and may already have been dictated from above. And those who are doing it can get away with it. Forget the Illuminati – this is the real thing, and it's no secret. You can stare right at it, anytime you want.