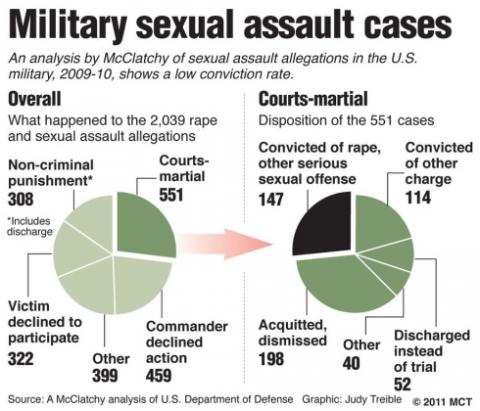 The Pentagon announced this week that a sergeant working in the military’s sexual assault prevention office had been charged with — you guessed it — sexual assault. This news came just a week after the officer in charge of the Air Force’s rape prevention program was arrested for sexual battery.

Amid the growing controversy, Congress is hurrying to draft new legislation and Obama has called for stricter punishment for sexual offenders. All officers in the sexual assault prevention office will be re-screened and re-trained, the Pentagon announced. As lawmakers and military officials debate what to do next, we’ve rounded up some of the best journalism on sexual assault in the military.

Did we miss any? Let us know in the comments below, or tweet them to us with the hashtag #muckreads.

The academy-award nominated documentary has helped bring the military’s rape crisis to national attention. Filmmakers interviewed victims and military personnel to reveal the overwhelming obstacles to prosecuting military rape, and how inadequate efforts have been so far to curbing sexual assault.

The story of one naval officer’s rape details the consequences victims face for coming forward — consequences that keep most victims from reporting sexual attacks. After telling her superiors she had been raped, Rebecca Blumer was accused of lying, sexually harassed, denied promotions and ultimately discharged.

A CNN investigation found another way the military handles rape accusations: labeling victims as emotionally unstable. After reporting a sexual assault, multiple service members were diagnosed with a personality disorder and discharged. Their abuse allegations were ignored.

The Enemy Within, National Journal, September 2012

What is it about the military that makes sexual assault so pervasive? The National Journal digs into the policies behind the statistics, and the legal loopholes exploited by sexual predators.

Active service members aren’t the only ones vulnerable to sexual assault. A recent series of scandals across the country exposed military recruiters accused of sexually abusing young people looking to enlist.

The Denver Post spoke with more than 60 victims about their battle for justice, and the psychological trauma that lasted long after their assault. Many felt the military blamed them for their rape, while shielding their attackers from punishment.