When the Internet began to take off in the mid-1990’s, it created the opportunity to do something scholars had been dreaming of for millennia — to gather all of the writings of scholars past and present together in a single online public library — a free, globally accessible version of the ancient library in Alexandria. But 20 years on and we are barely any closer to achieving this goal.

May 17, 2013 Michael B. Eisen The Daily Californian
printer friendly 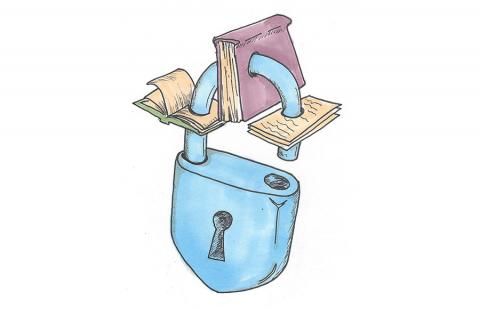 It is a felony to share knowledge created by the faculty, staff and students of the University of California with the public.

In 2011, online rights activist Aaron Swartz was accused of using the MIT computer network to download millions of scholarly journal articles with the intent of freely sharing them with the public. Federal prosecutors aggressively pursued charges against him, and, earlier this month, with a trial looming, Swartz killed himself.

The Justice Department has faced intense scrutiny for its senseless decision to turn this victimless act into a major case, but the real culprits in this tragedy are all the universities across the world that allowed articles that rightfully belong to the public to fall into private hands in the first place.

Every day, faculty, staff and students of the University of California hand over control of papers describing their ideas and discoveries to publishers, most of whom immediately lock them up behind expensive paywalls. They do this not only with the university’s knowledge— they do it with its complicity.

That the public does not have unlimited access to the intellectual output of academic scholars and scientists is one of the greatest-ever failures of vision and leadership from the men and women who run our research universities — all the more so at a publicly funded institution like the University of California.

When the Internet began to take off in the mid-1990’s, it created the opportunity to do something scholars had been dreaming of for millennia — to gather all of the writings of scholars past and present together in a single online public library — a free, globally accessible version of the ancient library in Alexandria.

But 20 years on and we are barely any closer to achieving this goal. Instead of posting their work online, scholars send them to journals, most of which condition publication on receipt of the authors’ copyright. These journals then exercise their exclusive rights to distribute these works by demanding payment for access to their collections.

If you have not yet published in a scholarly journal, you may not realize just how absurd this transaction is. Scholars at the UC system and every other research university on the planet voluntarily hand over control of their work to publishers, work that the same universities have to immediately turn around and buy back. And this is not a minor transaction — revenue for scholarly journals exceeds an estimated $9 billion per year.

It is inexplicable enough that university administrators have done next to nothing to stop this ridiculous system. But the situation is even worse than that. Not only do universities  refuse to stop shoveling money to publishers, but they all but require that their faculty publish in these journals. They do this by promulgating the idea that getting a faculty position at Berkeley, and then being tenured and promoted, requires publishing in prestigious journals, most of which greatly limit access to their contents.

While I and a handful of others have resisted, most of my colleagues are unwilling to risk their careers in the name of public access to their work. And thus an insane and unjust system continues.

The situation is, however, not completely static, especially in the sciences. Alternative publishing paradigms have emerged, including the “open access” model pioneered by the Public Library of Science which I co-founded. And major funding agencies, such as the National Institutes of Health and the Howard Hughes Medical Institute, now require that their grantees make their works freely available, albeit with a delay.

No single action would accelerate this process more than a clear endorsement from university leaders that free public access to the works people produce is not just a good— it is a priority. The university should take the lead by making such a declaration and openly altering the criteria for hiring, tenure and promotion to emphasize the value and importance of public access and ultimately require it.

For too long the leaders of this university have sat idly by while the crisis of scholarly communication festered. Decades ago, universities should have stepped forward to take advantage of the Internet to advance their disseminating mission. They didn’t, but it’s never too late to start.

Michael B. Eisen is an associate professor of molecular and cell biology at  UC Berkeley.