Americans Oppose Affirmative Action for Race, If You Only Ask White Americans 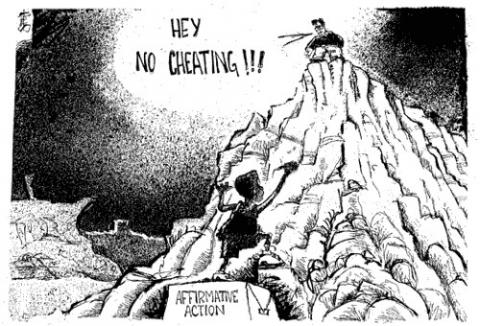 With the Supreme Court set to hand down a decision on a controversial affirmative action case in Texas in college admissions -- and expected to deal a blow to traditional race-based measures -- The New York Times has a thoughtful look at socioeconomic affirmative action, which is often presented as a preferable alternative in the 21st century. The argument, proponents say, is that while race is still an issue, race quotas often end up perpetuating class privilege, and that colleges and universities should focus on poor students instead. The upshot? "But many educators see real limits to how eager colleges are to enroll more poor students, no matter how qualified -- and the reason is money."

The story also drops this seemingly innocuous fact: "Polls show that while most Americans oppose racial or ethnic preferences in college admissions, they also think colleges should give extra help to the poor."

For example, look at this Pew study from 2009. The toplines are clear: Many more respondents oppose affirmative action for race than support it.

But when you look at the breakdown by race, it's a radically different picture. Note that against 1100 white respondents, there are barely 250 black and Hispanic ones -- and that their support for race-based remedies is 30 to 35 points higher.

This isn't hard to suss out: There are more white people in these polls, and in the U.S. white Americans, who don't benefit from these programs directly (setting aside arguments about the essential value of diversity and social inclusion), see less reason for them -- it's not necessarily racial malice; they just don't see the need. The minorities, of course, who stand to benefit directly, see things rather differently.

The pattern is reasonably consistent. For example, another 2009 poll, from Quinnipiac, found that 55 percent of voters favored ending affirmative action for minority racial groups in hiring, promotion, and college admissions. But drill down: Just a quarter of whites supported continuing the programs, a whopping 78 percent of blacks did. Hispanics were evenly split. (The poll doesn't appear to show how many respondents were black, white, and Hispanic.) The breakdown is consistent over time, too. Here's a Gallup poll from 2005; the poll's topline found Americans support racial preferences 50-42.

A couple of caveats. The conservative pollster Rasmussen has also found support for ending race-based affirmative action, but doesn't make their crosstabs publicly available, so it's unclear what the race breakdown is like. Furthermore, few of these surveys include Asian-Americans as a separate category, usually because there aren't enough respondents for statistical significance. However, Asians and Asian-Americans are an important part of the higher-education debate, as those groups' enrollment has skyrocketed. As Inside Higher Ed reported, there's some disagreement in the demographic, with some arguing that Asians and Asian-Americans now constitute such a large part of college populations that race-based preferences aiding blacks and Hispanics actually disadvantage Asians and Asian-Americans.

Update: In a poll this week, the Public Religion Research Institute found stronger support for affirmative action than others: Almost two thirds of respondents "favor programs which, in order to make up for past discrimination, make special efforts to help blacks and other minorities get ahead." But the disparity in answers between respondents of different races is present here, too: