labor Protesters and Police Clash at Nike Factory in Cambodia

While so far protests remain isolated, poor conditions across Cambodia, and poorer Asian states for that matter, could result in more widespread demonstrations. Bangladesh may be garnering most of the headlines due to recent tragedies, but conditions across poorer Asian states remain equally dire. Still, governments are hesitant to step in out of fear that manufacturers will relocate elsewhere, taking jobs and tax revenues with them. 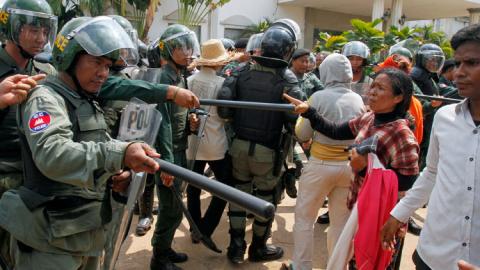 Workers on strike at a NIKE, Inc. plant have engaged in protests and clashes at a plant that contracts to produce Nike apparel. The plant itself is owned by Taiwanese owned Sabrina. Strikes are being organized by the Free Trade Union (FTU) with demands for pay increases.

So far fighting has broken out between rival factions of workers, some supporting the strikes, others opposing. Police have claimed that they only stepped in to break up fighting between workers and to ensure that property was not damaged.

Cambodia has emerged as a leading contender to take over Chinese garment manufacturing as costs continue to rise in the so-called Middle Kingdom. Exports totaled just over 4.6 billion USD in 2012 and the industry has recorded steady growth in recent years as companies across Asia look to lower costs by sourcing from lower cost countries. Still, many analysts believe that the growth of the garment industry is being hindered by repeated strikes and demand for higher wages.

Reason For Protest At Nike Factory

It is believed that approximately 4,000 workers are on strike, demanding a pay increase from about $74 to $88 dollars per month. While this raise may seem insignificant, it would be a major boost for cash strapped workers. Sabrina has refused to raise wages and claims that it simply lacks the funds to do so. While it may seem incredulous that the company cannot afford the demanded raise, profits are razor thin in the garment manufacturing sector.

Police and opposing workers allege that strikers began smashing windows with sticks and stones when the police intervened. The FTU claims that police and factory owners are colluding to start violence. There have also been claims circulating of unnecessary police brutality.

While so far protests remain isolated, poor conditions across Cambodia, and poorer Asian states for that matter, could result in more widespread demonstrations. Bangladesh may be garnering most of the headlines due to recent tragedies, but conditions across poorer Asian states remain equally dire. Still, governments are hesitant to step in out of fear that manufacturers will simply relocate elsewhere, taking jobs and tax revenues with them.

NIKE, Inc. has claimed that the plant already pays above minimum wage rates, and that further it is the sole responsibility of Sabrina to raise wages. Nike has tried to hide behind these claims in the past, shifting responsibility to suppliers, often to disastrous results. Consumers generally hold the brand, not the supplier, responsible and Nike will likely bear the worst of any negative publicity.

These protests hint at larger issues across the region. While workers in Europe and North America have secured higher wages and improved working conditions through union actions and pressure on their respective governments, working conditions in many Asian nations lag far behind. So far, most of the protests in China, Bangladesh, Cambodia have remained isolated at the factory level, but it may only be a matter of time before organized strikes cripple entire nations, if not the region.

So far, the International Labor Organization, a branch of the United Nations meant to protect workers rights and improve working conditions across the globe, has remained largely silent. The organization has been largely reactive, getting involved only after major tragedies, such as the factory collapse that killed over 1,200 lives in Bangladesh in April.