Everything is Secret, No Rule of Law at Guantanamo

June 11, 2013 Carol Rosenberg The Miami Herald
Printer friendly
Everything is Secret, No Rule of Law at Guantanamo Published June 11, 2013 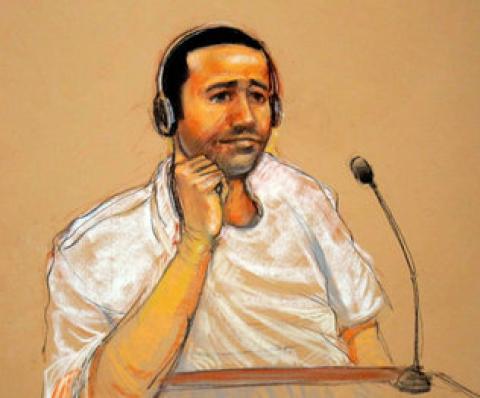 Abd al Rahim al Nashiri during his military commissions arraignment, Nov. 9, 2011 in Guantanamo Bay, Cuba. Nashiri is charged with the attack on the USS Cole, resulting in the death of 17 sailors. If convicted, he could face the death penalty., Miami Herald / JANET HAMLIN / MCT

GUANTANAMO BAY NAVY BASE, Cuba -- When the war court reconvenes this week, pre-trial hearings in the case of an alleged al-Qaida bomber will be tackling a government motion that's so secret the public can't know its name.

It's listed as the 92nd court filing in the death-penalty case against a Saudi man, Abd al Rahim al Nashiri, who was waterboarded by CIA agents.

And in place of its name, the Pentagon has stamped "classified" in red.

It's not the first classified motion in the case against the 48-year-old former millionaire from Mecca accused of orchestrating al Qaida's October 2000 suicide bombing of the USS Cole warship off Yemen. Seventeen sailors were killed in the attack, and the prosecutor proposes to execute Nashiri, if he's convicted.

Also on the docket for discussion this week is a classified defense motion that asks the Army judge to order the government to reveal information "related to the arrest, detention and interrogation" of Nashiri. By the time he got to Guantánamo in 2006, according to declassified investigations, CIA agents had held him at secret overseas prisons for four years during which, according to declassified accounts, he was waterboarded and interrogated at the point of a revving power drill and racked pistol.

But what makes the no-name government motion so intriguing is that those who've read it can't say what it's about, and those who haven't don't have a clue. Not even the accused who, unless the judge rules for the defense, is not allowed to get an unclassified explanation of it - and cannot sit in on the court session when it's argued in secret.

The motion was so secret that Nashiri's Indianapolis-based defense attorney said members of the defense team would not characterize it over the phone. "Literally, I had to fly to Washington D.C. to read it," said attorney Rick Kammen of Indianapolis, a career death-penalty defender whom the Pentagon pays to represent Nashiri.

Martin said his office doesn't use secrecy to cover up embarrassing episodes. Rather, he has said the court is engaging in a balancing act between national security and the public's right to know.

This week, the public will get to hear lawyers debate fundamental legal issues - whether an accused has a right to confront his accuser, notably whether FBI agents can offer information taken from a now dead man in Yemen a decade ago, and whether conspiracy can be a war crime.

But the secrecy at the Pentagon court whose motto is "Fairness - Transparency - Justice" is also garnering attention.