Through outreach, organizing, and advocacy workers can improve their wages, hours, and benefits through direct action and by enacting pro-worker policies. The only reason manufacturing jobs paid well in the first place was because workers demanded that they did decades ago. 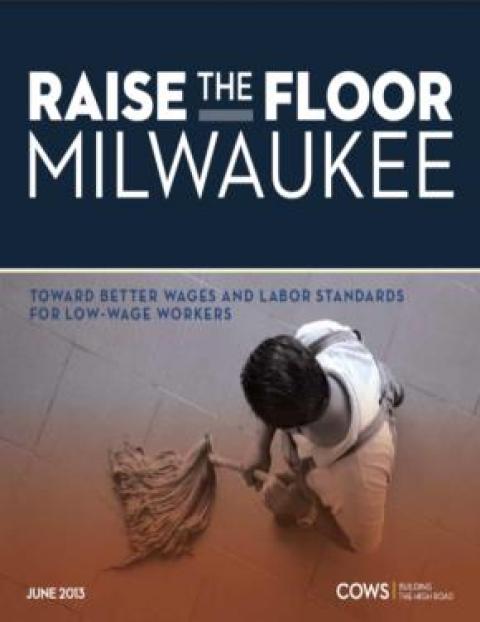 Writing about how to improve the future of Milwaukee, the Center on Wisconsin Strategy took a straight-forward approach with their new report. Raise the Floor Milwaukee: Better Wages and Labor Standards for Low-Wage Workers, examines what led Milwaukee from its place as an economic powerhouse with near 100% racial wage parity in the 1970′s to the stagnant, economically segregated city it is today.

The answer is quite simple. Good jobs in manufacturing have been replaced with low-paying jobs in food service, retail, and healthcare. This problem was made worse by the recent recession as middle-income jobs were permanently supplanted by low-wage, non-union, part-time jobs with few benefits. Essentially, the Milwaukee middle class has had the rug pulled out from under them, disproportionately affecting minority workers while enriching the wealthiest at their expense.

Today, about 35% of all Milwaukee workers are stuck in poverty-wage jobs (when they can find work at all). Whenever over one-third of any city can’t afford to make ends meet then families suffer, communities suffer, and the entire metro economy stagnates as consumer spending approaches record lows. As corporate profits reach record highs and good-paying jobs disappear, what can workers do?

The last time the United States saw this level of economic inequality was during the Gilded Age. Low-skill jobs in mills and factories were the fast food and retail jobs of their day. But, as the report makes clear, the solution now is much the same as it was then. Through outreach, organizing, and advocacy workers can improve their wages, hours, and benefits through direct action and by enacting pro-worker policies. The only reason manufacturing jobs paid well in the first place was because workers demanded that they did decades ago.

Instead of misleading the public by blaming a non-existent “skills gap,” saying high wages are “bad for business,” or claiming that benefits like health insurance are “too expensive,” elitist corporate groups like the MMAC should back this commonsense economic stimulus. More money in workers’ hands means that they spend more. This is better for them, better for our community, and better for the economy as a whole.

Check out this important report for yourself. Tell everyone about it on social media.

Most importantly, join the fight for higher wages in Milwaukee.