Cuban authorities began discussing three years ago how to transform bankrupt small and medium-sized state businesses - plagued by pilfering, embezzlement and general inefficiency - into cooperatives. The Communist Party adopted a sweeping five-year plan to "update" the economy in 2011, which included moving more than 20 percent of the state labor force of 5 million people into a new "non-state" sector of private and cooperative businesses. 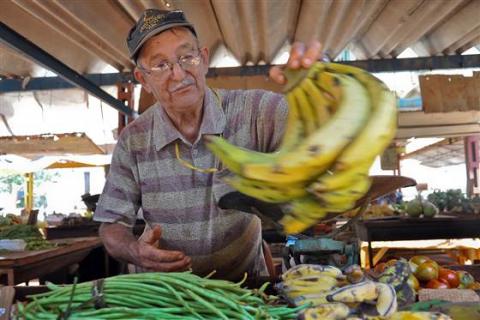 An elderly man sells fruit and vegetables in a market of Havana, on April 20, 2012. One hundred Cuban produce markets are shifting to member-owned cooperatives, NBC News / STR / AFP/Getty Images

HAVANA - One hundred state-run produce markets and 26 other establishments were scheduled to become private cooperatives on Monday as Communist-run Cuba continues to shed secondary economic activity in favor of individual initiative and markets.

The cooperatives will be the first outside of agriculture since all businesses were nationalized in 1968.

The government says many more establishments will follow, beginning in 2014, as an alternative to small and medium-sized state businesses in retail and food services, transportation, light manufacturing and construction, among other sectors.

The produce markets were supplied exclusively by the state, which also set prices and wages.

As cooperatives they will now purchase produce from any source and set their own prices, with the exception of a few state supplied staples, for example rice, chick peas and potatoes in Havana.

At one of the dozens of Havana markets set to become cooperatives this week, the mood was festive on Saturday as workers painted the dark and dingy premises, fixed broken bins and in general spruced up the place on their last day as state employees.

"We were given the choice of working as a cooperative member or being laid off," Antonio Rivera, a worker turned member, said.

"I think we will be better off so I joined," he said.

On Sunday the 100 markets took inventory and made other preparations, before their adventure into the country's growing "non-state" sector began.

President Raul Castro, who took over from his brother Fidel in 2008, has already taken steps to deregulate small private businesses in the retail sector, lease small state shops and taxis to individual employees and fallow state lands to would-be small farmers in search of improved production and efficiency.

According to the government, more than 430,000 people now work in the non-state sector which consists of private entrepreneurs, their employees and individuals who own or lease taxis and the like.

The figure does not include some 2,000 agricultural cooperatives and 400,000 small farmers.

The new cooperative markets average 15 or fewer members and will lease their premises from the state.

They will function independently of state entities and businesses, set prices in cases where they are not fixed by the state, operate on a democratic basis, divide profit as they see fit and receive better tax treatment than individually owned businesses, according to a decree law published in December.

The law allows for an unlimited number of members and use of contracted employees on a three-month basis.

The newly elected administrator of one market said that for weeks they had been making contact with farm cooperatives in preparation for Monday, and could also buy from individual farmers and state farms and wholesale markets.

"I'm sure the public will benefit. The produce will be of better quality, there will be better service and people will go where the prices are the lowest," he said, asking his name not be used because he feared he would get into trouble for talking to a foreign journalist.

"There will be more competition and the winners will be those who do the best job," he said, adding, "everything will depend on us and we will have to look for merchandise wherever because if we don't we will not make anything."

Consumers appeared to support the measure, though some fretted over a possible increase in prices.

"They should have done this long ago," Soledad Martinez said as she shopped at the market on Saturday.

"Now there will be a greater variety and we will be treated better. I just hope prices decrease a bit and do not go up," she said.

The Communist Party adopted a sweeping five-year plan to "update" the economy in 2011, which included moving more than 20 percent of the state labor force of 5 million people into a new "non-state" sector of private and cooperative businesses.