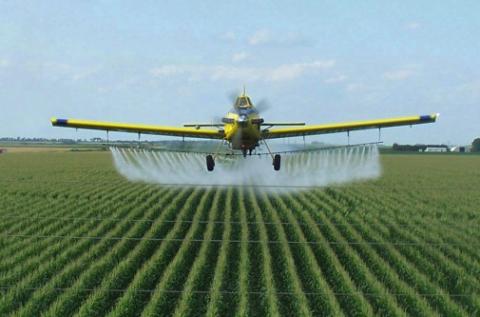 Pesticide use is skyrocketing across the Midwestern U.S. corn belt, as biotech companies like Syngenta and AMVAC Chemical watch their pesticide sales spike 50 to 100 percent over the past two years, NPR reported Tuesday.

The culprit? Bt corn—a type of genetically engineered corn with insecticide built into its genes.

Variations of this corn strain—peddled across the world by large multinationals including Monstanto and Syngenta—are giving rise to Bt resistant insects and worms, studies show.

Yet, now that the targeted insect killings are not working, big agribusiness is simply throwing pesticides at the problem instead of moving away from GMOs.

This is despite warnings last year from the Environmental Protection Agency that unrestrained use of Bt corn will off-set the balance of the ecosystem.

Monsanto denies the severity of the damage wrought by Bt corn, assuring customers that many farmers 'have great success.'

Environmental groups have long warned that Bt corn is a danger to non-'pest' insects. In a 2004 briefing, Greenpeace showed that the effects of non-targeted insect killings ripple throughout the ecosystem.

Critics charge that the modified corn—which is spread by big agribusiness, pushed to small farmers, and crossbred with non GMO strains—undermines food diversity and security and devastates small-scale, sustainable farmers and peasants.

The revelation comes after scientists recently warned that pollution runoff from Midwestern farms, carried to the ocean by the Mississippi, is slated to create the largest ocean dead zone recorded in the Gulf of Mexico, choking marine life that crosses its path.