Names Emerge from Shadows of 1948 Crash

28 Mexican citizens returning to their homeland perished in a fireball over Central California. Woody Guthrie's poetry protested their anonymity. Who were they? 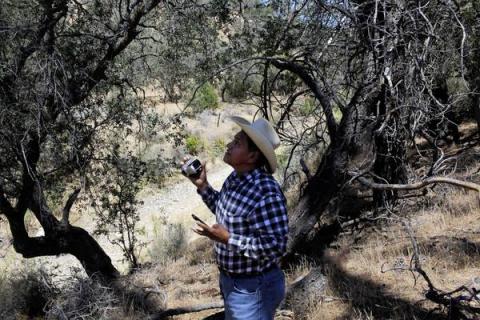 Jaime Ramirez's grandfather and uncle were aboard the DC-3 that crashed near Coalinga in 1948. , Photography and video by Michael Robinson Chavez

Jaime Ramirez stood in front of an oak tree, jagged and black from a plane crashing into it all those years ago. He removed his white cowboy hat, closed his eyes and whispered, "Abuelo, Tio, estoy aqui." ("Grandfather, Uncle, I am here.")

Nearby, Tim Z. Hernandez, who had feared this moment might never happen, leaned down and sprinkled tobacco and sage. When the writer first came to this hushed place, looking into a 65-year-old mystery, he had felt he was intruding. Each time he returned, he always left a small offering. He could hear the Woody Guthrie song "Plane Wreck at Los Gatos" playing in his head:

A fireball of lightning, and shook all our hills,

Who are all those friends, all scattered like dry leaves?

On Jan. 28, 1948, a plane chartered by U.S. Immigration Services left Oakland carrying 32 people, including 28 Mexicans. Many were part of the bracero program and had finished their government-sponsored work contracts. A ride home was part of the deal. Others had entered the country illegally.

Over farms and ranches on the edge of the Diablo Range, 20 miles west of Coalinga, the World War II surplus DC-3 trailed black smoke. An engine exploded. A wing broke off, floating left and right. More than 100 witnesses watched bodies and luggage thrown from the fireball. There were no survivors.

This marker at Holy Cross cemetery in Fresno will be replaced by a monument with the names of all the Mexican citizens who perished in the 1948 crash.

News accounts named only the pilot, first officer, stewardess — who was also the pilot's wife — and an immigration officer. The others were listed simply as "deportees."

Guthrie read about the crash and wrote a poem protesting the anonymity of the workers. Schoolteacher Martin Hoffman later set the words to music.

In 2009, Hernandez was at the Fresno County Library scrolling through old newspapers, researching a book about Bea Franco, the inspiration behind the Mexican girlfriend character in Jack Kerouac's "On the Road." He'd immersed himself in the era's music, especially that of Guthrie, who sang about migrant workers and Central Valley fields.

It was a life Hernandez, 39, knew well. The poet and novelist now lived in Colorado, but grew up in farm towns across the Central Valley. He traced his love of storytelling to long road trips with his family picking crops. His mother, Lydia, would read books aloud; his father, Felix, would jump in and say "That's not what really happened" and spin his own endings.

A 1948 headline about a fireball plunging to earth caught his eye. He thought of Guthrie's song about the deportees. For the first time, Hernandez realized that Guthrie wasn't referring to the city of Los Gatos, near San Jose, but to the juniper-scented hills and canyons above the oil pumps in western Fresno County.

"Who were the people on that plane?" he wondered. "Did anyone ever tell their loved ones why they didn't come home?"

In 2011, Carlos Rascon, the new director of cemeteries for the Roman Catholic Diocese of Fresno, visited the old Holy Cross graveyard. He noticed a bronze marker that read: "28 Mexican citizens who died in an airplane accident."

A cemetery worker gave him "a short, cut-up version" of the crash, Rascon said. "But 28 souls in a mass grave with no names? It just didn't sit right with me."

The cemetery register listed numbers 1 through 28, and after each someone had written only "Mexican National." The diocese's church register had the names but some were obviously misspelled and all were missing middle initials — key in a culture with many common first and last names.

Rascon's father-in-law had been a bracero. He told Rascon they used to call the planes that flew them home, usually at night, El Tecolote (the Owl). Rascon thought he should do something with the names, but he had no clear idea what.

Back in Colorado, Hernandez couldn't get the deportees out of his mind. Scouring old news accounts, he learned they were buried at Holy Cross. His calls to the diocese cemetery offices were brushed off when he said he wanted information from 1948.

Frustrated, he scanned a roster of employees on the diocese website until he found a Latino surname — Rascon.

"I'm looking for the names of 28 deportees," Hernandez told him in a phone call last year.

"I have the names," Rascon replied.

Hernandez suddenly felt nervous. He'd already decided to write a book about the deportees if he could find their names. Now there was no turning back.

Rascon told him what else he'd heard from the cemetery workers: Someone had been leaving flowers at the grave for years. Often in November on El Dia de los Muertos, when Mexicans honor their dead.

Jaime Ramirez grew up in Charco de Pantoja, a rancheria of about 3,000 people in central Mexico.

When he was about 9, he and his siblings asked their mother why they did not have two grandfathers. She said her father died in a plane crash in the United States when she was 11, and she didn't know where he was buried.

Her father had saved enough money during his bracero contracts to buy land but couldn't afford corn seed. He and his best friend — Ramirez's great-uncle — decided to cross the border illegally to earn money for crops. They never came home.

In 1974, Ramirez came to the United States at age 18 to work as a dishwasher in Pasadena. He planned to look for his grandfather's grave but didn't know where to start. Eleven years later, he had become a kitchen manager and was transferred to a restaurant in Salinas. There he heard someone mention "Diablo Range." Something stirred deep in his memory. Was that the place mentioned in his mother's faded Mexican newspaper clipping about the crash?

He started his search at the Fresno County Hall of Records, where he found death certificates with the misspelled names of his grandfather and great-uncle. The documents said they were buried at Holy Cross. He would not believe it unless he saw the grave.

Even without the directions a receptionist gave him, he would have been able to find it. The rest of the cemetery, where no one had been buried since the 1950s, was a jumble of statuary; the western corner was empty, except for one small marker.

That night he called his mother in Mexico. She cried. His paternal grandfather got on the phone and said, "Mi'jo, I can go in peace now that I know where my brother was buried."

Ramirez now owns a restaurant and home just a few miles from Holy Cross. When relatives from Mexico visit, they go to the grave. In November, he leaves flowers.

The Jan. 29, 1948, Fresno Bee front page, with a photo of the wreckage of the plane crash near Coalinga. (Fresno Bee)

Hernandez made note of clues among recovered items: a Laundry Union Workers card from San Francisco, a letter addressed to someone in Northern California, baby clothes found near a woman's body.

He enlisted Rascon to pull the death certificates, which had middle names. After the two men untangled some highly Anglicized spellings, they finally had complete names. But they had no ages, no birthplaces, no relatives — no stories.

"Each of our families is made up of epic stories. Tales of migration, struggle, sacrifice and triumph," Hernandez said. "How do those just fade?"

Hernandez and Rascon had decided to raise money for a memorial engraved with the deportees' names. As they neared their $10,000 goal, Rascon and the diocese wanted to press ahead, but Hernandez was reluctant without having found even one family member.

He put out a plea through local media, but heard nothing. After he mentioned his quest at a writers conference at the National Steinbeck Center in Salinas, a woman with silver curls and tears streaming down her face approached him.

"My father believed in the importance of names," Nora Guthrie told him. "He would repeat them like a chant. Even just finding their names matters."

Hernandez agreed it was time to dedicate the memorial. He'd come to accept that he might never find any of the families.

Ramirez, the restaurant owner, recently told a friend the story of his grandfather. That friend repeated the story to another man who said, "Wait! Your compadre's grandfather was in the paper." He dug out a 2-month-old article about Hernandez's efforts.

In late June in Coalinga, Ramirez met Hernandez for the first time. He told the writer about his grandfather, Ramon Paredes Gonzales, and his great-uncle, Guadalupe Ramirez Lara.

They drove up the winding canyon and walked through whispering dried grass to the tree where the plane crashed. Hernandez reached out his hands to the tree and ravine.

Jaime Ramirez, right, with writer Tim Hernandez, visits the crash site and for the first time sees where his grandfather and uncle died.

"Of course, I feel that," Ramirez said, needing no explanation. "May they rest in peace."

The monument will be unveiled on Labor Day.

"They're answering Woody's prayer," Nora Guthrie said. "If you keep the questions — the ideas — alive, then someday, someone will come along to answer. My father sang, 'All they will call you will be deportees.' This is a back-atch'ya. A resounding 'No, we all have names.' "

The stone will be etched with 32 falling leaves, four of them bearing the initials of the Americans who died on the flight. In the center will be 28 names: