Ending the Tyranny of the Mitch McConnell Minority

McConnell has so exaggerated the filibuster power that it has effectively allowed him to thwart not just Senate votes but the operations of federal agencies such as the National Labor Relations Board. He and his allies have gone so far as to block the confirmation of nominees for cabinet posts, such as Department of Labor nominee Tom Perez. 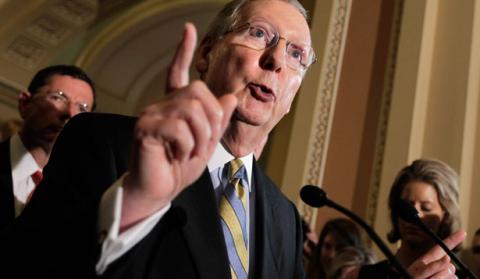 Mitch McConnell has since 2007 been maintaining a rogue branch of government.

Though the Republican leader in the Senate lacks any constitutional grounding, though he has no popular mandate and though he leads only a minority of senators, McConnell has defined the range of debate and steered the direction of the federal government by engaging in the most aggressive abuse of the rules in the history of the chamber.

That abuse involves a redefinition of the traditional filibuster power as a veto that the minority can use to undermine not just legislation and presidential appointments but the very functioning of the federal government.

The founders of the American experiment imagined no such veto. In fact, the US Constitution imagines a system under which the legislative branch provides advice and consent to the executive branch.

But McConnell has so exaggerated the filibuster power that it has effectively allowed him to thwart not just Senate votes but the operations of federal agencies such as the National Labor Relations Board. He and his allies have gone so far as to block the confirmation of nominees for cabinet posts, such as Department of Labor nominee Tom Perez.

McConnell's crew has done this with a consistency that extends far beyond specific issues or individuals. They have created systematic obstruction, which allows the minority leader to "govern," even though he lacks any authority to do so.

When Lyndon Baines Johnson was the Senate majority leader in the contentious 1950s--an era of Cold War, segregation, recession and debates over everything from space travel to statehood for Alaska--he only had to file one cloture motion to end a filibuster.

Since Harry Reid became Senate minority leader in 2007, he has had to file 420 cloture motions to end filibusters. And while he usually has majority support for acting on a bill or an appointment, he rarely has the sixty-vote super-majority required by McConnell.

"The Senate is not the House and the minority party must be treated with respect and given the opportunity to offer amendments and make their case in opposition," says Senator Bernie Sanders, I-Vermont. "A minority must not, however, be allowed to permanently obstruct the wishes of the majority. That is not democracy. That is a perversion of democracy."

The question of whether McConnell will be able to maintain his fourth branch of government, and with it what Sanders describes as "the tyranny of the minority," may well come to a head Tuesday.

Reid has scheduled confirmation votes on seven presidential picks: National Labor Relations Board members, as well as nominees to head the Labor Department, the Export-Import Bank, the Environmental Protection Agency and the Consumer Financial Protection Bureau.

If McConnell and his caucus abuse the filibuster in order to block those votes, Reid says he will ask the Democratic majority--and any Republicans who might favor majority rule--to end the tyranny of the minority when it comes to the appointment process.

The majority leader, who has blinked in previous wrangling over rules reforms to end the abuse of the filibuster, seems finally to be prepared to take the small step of changing Senate rules--with the approval of a majority of senators--to allow a majority of senators to demand simple up-or-down votes on whether to confirm presidential appointments.

"This is really a moment in history that circumstances dictate a change," says the majority leader.

Reid notes that a mere twenty nominees were filibustered during the history of the republic up to the election of President Obama.

"The changes we're making are very, very minimal," says Reid. "What we're doing is saying, 'Look American people, shouldn't President Obama have somebody working for him that he wants?' The 15 people that we've filed cloture on that are pending they've been waiting an average of nine months."

McConnell is already crying foul, and Washington is ablaze with "Reid-McConnell Relationship Hits New Low" headlines. If Reid moves on Tuesday to restrict the Kentucky Republican's obstructionism, McConnell says the Nevada Democrat will go down "as the worst leader here ever."

McConnell knows better. But he is furious about the prospect that his rogue operations might be restricted.

As Sanders says, "This country faces major crises. The American people want us to act to address unemployment and the economy. They want us to deal with the global warming, health care, campaign finance reform, education, crumbling infrastructure and the deficit. But in my view, none of these problems will be effectively addressed so long as a single senator may demand 60 votes to pass legislation (or approve nominees)."

John Nichols and Bob McChesney are the authors of Dollarocracy: How the Money and Media Election Complex is Destroying America (Nation Books), a groundbreaking examination of how" the money power" warps government. Naomi Klein says: "John Nichols and Bob McChesney make a compelling, and terrifying, case that American democracy is becoming American dollarocracy. Even more compelling, and hopeful, is their case for a radical reform agenda to take power back from the corporations and give it to the people."