Walmart Stores Inc., the nation's largest private employer, is fuming about a ''living wage'' bill approved by the D.C. Council that has an unusual twist: It would apply only to certain large retailers, forcing them to pay at least $12.50 an hour, nearly 50 percent higher than city's minimum wage of $8.25. 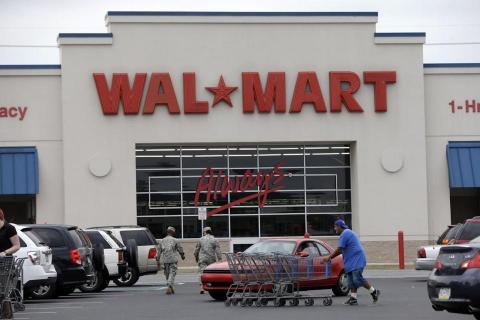 WASHINGTON -- A bitter standoff between Walmart and
Washington, D.C., officials over the city's effort to
impose a higher minimum wage on big-box retailers is
fueling a wider debate about how far cities should go
in trying to raise pay for low-wage workers -- and
whether larger companies should be required to pay
more.

Walmart Stores Inc., the nation's largest private
employer, is fuming about a ''living wage'' bill
approved by the D.C. Council that has an unusual twist:
It would apply only to certain large retailers, forcing
them to pay at least $12.50 an hour, nearly 50 percent
higher than city's minimum wage of $8.25.

The measure is being cheered by unions and worker
advocates, who have long complained about Walmart's
wages and working conditions. Opponents call it an
unfair tactic that will discourage companies from doing
business in the city.

Walmart has threatened to cancel plans for three of the
six stores it hopes to build in some of the city's
poorest neighborhoods. The measure is now before Mayor
Vincent Gray.

Some economists say targeting large retailers or
industries that can afford to increase wages may be an
effective way to raise pay to even higher levels than a
broad-based minimum wage. The district's bill applies
to stores of 75,000 square feet or larger and annual
corporate revenue of at least $1 billion.

''A large retailer can more easily absorb a pay hike
than a corner store,'' said Arindrajit Dube, an
economics professor at the University of Massachusetts
Amherst and a prominent supporter of raising the
minimum wage. Large stores are ''less likely to shut
down or cut back on employment'' in response to an
increase, he said.

But Dube cautioned that a targeted hike might make it
harder for Walmart and other big-box stores to pass on
the wage hike as a price increase, since smaller
retailers could still keep prices low.

The capital's minimum wage already is higher than the
federal rate of $7.25 an hour. Other cities and states
that have sought to raise the minimum wage have applied
the hike to all businesses. San Francisco's rate of
$10.55 an hour is the highest in the nation.

Still, no other city has singled out certain
businesses. The Chicago City Council tried to pass a
similar measure seven years ago, but it was vetoed by
then-mayor Richard M. Daley.

President Obama has proposed raising the federal
minimum to $9 an hour and boosting it annually to keep
pace with inflation.

Many Walmart workers already make $12.50 an hour -- the
rate set by the district's bill -- or more, but the
average sales associate earns $8.81, according to
IBISWorld, an independent research group.

Walmart spokesman Steven Restivo questioned why the
D.C. measure excludes unionized stores such as Safeway
and Giant, suggesting the bill is targeting nonunion
stores. He said most of the company's 1.4 million
employees work full time, and about 75 percent of
management started as hourly associates.

David Neumark, an economics professor at the University
of California Irvine, has argued that raising the
minimum wage is bad for workers because it discourages
employers from hiring and leads to fewer jobs. He said
Walmart's low prices are more important to helping
low-income workers.

''We can talk about wages, but if you can lower prices,
that's as good as raising wages,'' Neumark said. ''And
of course helps a lot more people.''

Forcing Walmart to raise wages could create gradual
pressure on smaller businesses to boost wages over
time, said Michael Reich, an economics professor at the
University of California Berkeley.

''A lot of people would be trying to get jobs at
Walmart,'' he said. ''That labor market pressure is
going to raise wages at smaller stores, just because
Walmart is such a big employer.''

But business groups call the idea outrageous and
unfair.

''The assumption is that retailers make a lot of money,
therefore they can pay higher wages and therefore you
can impose higher costs by fiat. That doesn't
necessarily reflect reality.''

The district's measure could also affect other
retailers like Best Buy and Macy's.

More than 140 cities and counties have laws that
require businesses receiving government contracts or
subsidies to pay a rate higher than the federal or
state minimum wage.