She faced decades of abuse because she was opinionated, she would not back down, and she was a woman. 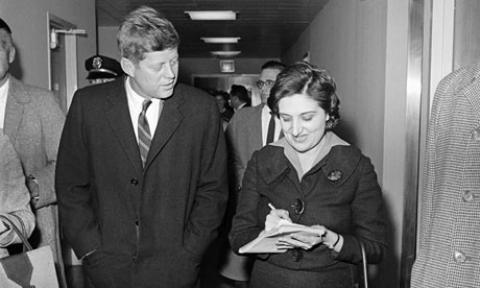 When the news spread through Washington this weekend that the unwavering, pioneering journalist Helen Thomas had died, there must have been a collective sigh of relief throughout the halls of Washington.

News articles and obituaries are obligatorily mentioning her retirement over political remarks about Palestine and Israel.  They all will and should celebrate her trail -blazing career as a journalist and author.   And now that she has died, it has become politically correct to re-embrace her, because now Helen is safe.  She will not be asking the uncomfortable questions anymore, questions that made lying politicians squirm, as they stared dumbfounded back at her, always surprised at freedom of the press in action, at a woman who did not know her place.

But in Helen’s final years, there was little celebration of her career and her courage, as former friends, coworkers and many in Washington jumped on the bandwagon resolutely condemning her for comments made in a hit piece that took brief comments out of context.  Perhaps most appallingly, President Obama took time from spying on one half of the world and bombing the other half to state that her resignation was “the right decision.”

In a world where politicians like George Bush, Dick Cheney and Rahm Emmanuel are celebrated for their reputations for expletive laden tirades, can we really pretend that Helen’s comments were so shocking or offensive that they were worthy of forced retirement?  In a world where we hear the daily drivel from presidents promoting wars of madness with lies and straight faces, how did we let such vitriol rain down on her?

Helen Thomas did more to challenge the war from the back row of the White House press corps (where she was relegated for three years after criticizing George Bush in 2003) than any embedded journalist did on the front lines who lay in bed with the military in Iraq.  She stood for a journalistic integrity that was not welcome in an all- encompassing corporate- media-congressional complex.    In the beginning of her career, she was fired for going on strike with her colleagues at theWashington Daily News.  She faced decades of abuse because she was opinionated, she would not back down, and she was a woman.  In later years, it was shocking to see how George Bush and Barrack Obama addressed her, ageism in presidential clothing, as if she was a child to be tolerated but dismissed and chuckled at, a minor nuisance who did not know her place, a relic that they just needed to pander to for a minute, so they could get back to the Big Lie.

Helen Thomas was ambushed for being Anti Zionist, and as Ralph Nader wrote, “the evisceration was launched by two pro-Israeli war hawks, Ari Fleischer and Lanny Davis. Fleischer was George W. Bush’s press secretary who bridled under Helen Thomas’ questioning regarding the horrors of the Bush-Cheney war crimes and illegal torture. His job was not to answer this uppity woman but to deflect, avoid and cover up for his bosses. Davis was the designated defender whenever Clinton got into hot water. As journalist Paul Jay pointed out, he is now a Washington lobbyist whose clients include the cruel corporate junta that overthrew the elected president of Honduras.”  If one followed her career, especially in the last decade, she had upset the status quo repeatedly by asking about the deaths of civilians in America’s wars, the unholy alliance with Israel, their unspoken of nuclear arsenal, and the way we hide the face of war.  Powerful people wanted her silenced and used a 30 second video snippet to try and erase 7 decades of integrity and public service.

So you can imagine how honored we were when in the fall of 2010, we were invited to meet at length with Helen.  Mutual friends had put us in touch and she welcomed us to join her at her home.  She graciously received us, and spoke for hours about a dizzying array of topics.  Her mind was incredibly sharp, having absorbed a number of daily papers that day, and numerous books on current events were neatly stacked, bookmarked and referenced throughout our conversation.  Incredibly open to any question, ( Who was the best president? “It would have been Lyndon Johnson, if it wasn’t for the Vietnam War.  His War on Poverty was an incredible achievement.  But the Vietnam war haunted him.”)  Helen was the consummate journalist even in her own living room, peppering us both with questions, unflinchingly taking it all in.  She moved seamlessly from talking about her Detroit childhood to her trip to China on Air Force One with Richard Nixon, always seeing the interconnectedness of the past and how it influences the present.  When asked about our work in the Middle East, we hesitated at first to answer fully about what we witnessed during the ongoing Israeli occupation, and the Iraq wars. She appeared so very concerned about the experiences of children in these places, and was visibly troubled by what she knew.  Helen was so clearly empathetic to the plight of children, those living in refugee camps, those incarcerated, those who are suffering, that it seemed unfair to burden her further with eyewitness accounts after all she had recently been through.  But her curiosity and questions were no match for us, and like always, Helen asked the questions she wanted.

A few nights later, over tea-then apple martinis and a full-course dinner, Helen continued her line of questioning.  She was very interested in the work of the organization we work with, The Middle East Children’s Alliance, and pledged to speak in San Francisco at a benefit for humanitarian aid for children in Palestine.  Unfortunately, Helen’s physical health soon deteriorated further, preventing her from making the 3000-mile flight.  But the time we spent with Helen Thomas stayed with us, and we were troubled that she was never able to come speak at an event, because we wanted to see her celebrated by the thousands of people we knew who respected her, loved her and were horrified by how she had been treated and forced into exile; even by some close friends and MECA supporters.

Two years later, immediately after the “Operation Pillar of Defense” the 8 -day bombing of Gaza by Israel where 158 Palestinians were killed, 30 of them children, we crossed the Erez crossing from Israel into Gaza City.  A week after we had arrived, we were out late in the early morning hours conversing with journalists and other internationals.  The topic of the Arab Spring and the role of social media were hot topics of discussion.   A young Palestinian journalist, who had recently completed her studies in London, returned to Gaza months earlier to cover human rights issues for an online news website written in English, and stated to us that she wanted to be the next Helen Thomas.

Another journalist responded to her by saying, “Oh, you mean because of her comments on Palestine.”

“No, that is not why.  There are two things that will change the world,” she said,  “Media and women: and I am both. “

This is Helen Thomas’ legacy.  This is proof that the uncomfortable questions will continue to be asked.  That is what Helen wanted.   Accountability of the powerful, a fearless press in search of the truth.

Barbara Lubin is a lifelong peace, justice and disability rights activist. She is the founder and Executive Director of the Middle East Children’s Alliance (MECA), a non-profit organization which since 1988, has been working for the rights and the well being of children in the Middle East.

Danny Muller has worked with the Middle East Children’s Alliance since they were jointly breaking the economic sanctions against Iraq with Voices in the Wilderness in the 1990’s.  He has worked with MECA in Iraq & Palestine.  He is a war tax resister and war abolitionist.

They can be reached at meca@mecaforpeace.org