Familias Unidas Para la Justicia at Sakuma Brothers Farms are attempting to demolish the dismal conditions of their labor. In doing this they are cultivating a newer and more democratic form of work through their strike. "Viva la Huelga!" is the call of the hour. There is much the labor movement can learn from these striking workers and the long tradition of struggle they come from in Oaxaca. 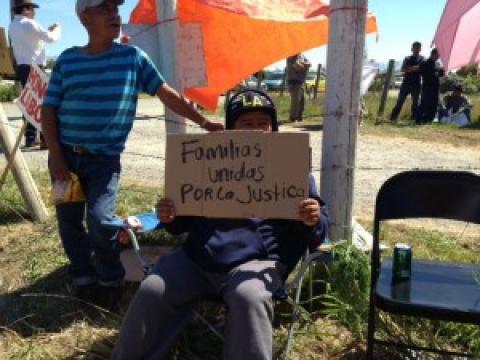 As workers walked past fields of strawberries and blueberries into a negotiation meeting this morning with Sakuma Brothers Farms, Inc. management, they were told to accept management's terms or lose their jobs.  This threat comes amidst a heated strike of over 200 immigrant farm workers at the Burlington, WA farm which is just north of Seattle.  It is the second strike the workers initiated in the last two weeks over a list of demands over wages, dignity, and respect.

The strike started after the firing of farm worker Federico Lopez on July 10th.  Lopez and his coworkers believed he was targeted for bringing up grievances with his superiors.  Some of the workers were listening to an interview of Rosalinda Guillen on a Spanish-language radio show on a local radio station.  They decided that they wanted her to assist them with their struggle at Sakuma Brothers Farms.

Rosalinda Guillen works for Community to Community Development, a farm-worker and food-justice organization located near the Canadian border in Bellingham, WA.  She began working as a farm worker in Washington State in 1960, eventually joining Cesar Chavez's United Farm Workers (UFW).  She became a leader in the bitter eight-year campaign to organize the workers at the Chateau Ste. Michelle Winery in the state which ended with a contract and victory for the workers in 1995.  A rallying cry for the UFW in its early days became "Viva la Huelga!" as the strike and other disruptive tactics were often deployed by the workers in an industry where there was little labor protection.

Like their forbearers in the UFW, these workers work and live in deplorable conditions.  Sakuma Brothers Farms provides the workers with what the company calls "cabins" but what really amount to shacks.  These small dwellings form labor camps where the workers and their families live in crowded, dirty conditions.  The shacks are small, incredibly hot during the day, and cold at night.  There is substandard furniture and mattresses, bedbugs are a recurring problem in the camps, and bathrooms are located in a different area.  Up to half of what workers make is deducted from their paychecks to pay off the debt they owe for the housing.  Sometimes, there is barely enough money left over to pay for the gas they need to drive to work.  Sakuma Brothers Farms is proof that company towns are not a thing of the past.

Similar to business practices of companies that ran company towns years ago, the work itself is divided by ethnicity.  The piece-rate workers are mostly from Oaxaca, Mexico.  Many of them don't speak Spanish but instead speak indigenous Mixteco and Triqui languages.  Most supervisors are mestizo, the main crop supervisors are white, and the executives are either Japanese or white.  This stratification is nothing new in the agricultural industry but it is intentional.  It is not uncommon for the indigenous piece-rate workers to be derisively called "oaxaquita," "indio," and "estupido."  This abuse and intimidation compelled the workers to root a number of their demands in respect and dignity.  The strike, after all, is about much more than wages.

Rosalinda Guillen and others from Community to Community rushed to the defense of the workers, helping them craft a list of demands.  Community to Community organizer Tomas Madrigal stated that "the wage is the most important demand," adding that there are a number of other important issues at stake.  Sakuma Brothers Farms has a piece-rate wage for the blueberries picked at 30 cents per pound.  This makes it nearly impossible for the workers to make the state's minimum wage of $9.19 an hour in an eight-hour shift.  They find themselves running through the fields, and rushing to pick as much as possible, only to fall far short of the minimum wage.  Minors who work in the field are paid even less.

The first strike was successful in reinstating Federico Lopez, pressuring management to remove a particularly abusive crew boss, and getting management to look into issues of wage theft and negotiate a process to decide a better wage.  They would not budge on much else, prompting the 200 workers to strike again.  Union-busting consultants were brought up from California to intimidate the workers but the tactic failed to dissuade the workers from continuing with the strike and negotiations.

The workers soon learned that management was looking into bringing up workers with H-2A visas, reserved for temporary or seasonal agricultural workers, for the August blueberry harvest.  Tomas Madrigal believes that the company will use these workers as scabs in an attempt to break the strike.  "It's our analysis that the company will use the H-2A visa to go after this workforce."  Many of the workers from Oaxaca have returned for the strawberry and blueberry harvest every season for the last several years.  There were a strike in 2004 and another in 2011.  The workers gained little from the strikes and many were fired for complaining of their treatment and low wages.

This strike however may be different.  Although Rosalinda Guillen and others from Community to Community have done much to assist the workers and participate in negotiations, organization within the workforce has existed for quite some time.  The workers are still non-unionized but are in effect acting as a union and taking bold actions that are rarely seen in the trade union movement today.  It may sound surprising but the workers have no history or experience in union organizing.  "For people that say they never experienced organizing, they learned really quickly," stated Tomas Madrigal in an interview.  He continued by describing the democratic decision-making process of the workers, calling it "very transparent."  All major issues that have to be decided on are translated into three languages.

The workers recently decided to strike under the name Familias Unidas Para la Justicia (United Families for Justice) as they see the struggle of workers on the job as a larger struggle for the living conditions, dignity, and justice of entire families.  Because of the increased militarization of the US-Mexico border in recent years, many of these workers and their families are here to stay.  There are organizations that exist to assist Oaxacans and maintain a connection with their home.  One such organization is the Frente Indígena Oaxaqueña Binacional (Oaxaca Indigenous Binational Front).  A meeting is planned to take place between the Front and the farm workers.  The Front was created in California in 1987 to connect indigenous Oaxacans all along the migratory labor route from Oaxaca to the Pacific Northwest.  The network established by the Front is as much a political and economic one as it is cultural.

Oaxaca, after all, is a place of political renewal and revolt.  It was here that an uprising occurred in 2006.  Initially triggered by a teachers strike, a popular uprising developed and the Popular Assembly of the Peoples of Oaxaca, or APPO as it is abbreviated in Spanish, was formed.  The APPO helped create a form of direct democracy and self-government in Oaxaca during the uprising.  The bordering state of Chiapas is home to the Zapatistas who rose up in 1994 after they declared that NAFTA was a "death sentence to the indigenous people of Mexico."  Is it possible that, although the striking workers in the Pacific Northwest are 3,000 miles away from their home and similarly detached from the social movements there, there is some continuity of struggle, of standing up for justice against great odds?

Over 100 years ago, another Oaxacan named Ricardo Flores Magón travelled north of the border to stand up for dignity and justice.  He became one of the leaders, or "anti-leaders," of the Mexican Revolution.  He joined the radical Industrial Workers of the World labor union and organized a multiracial fighting force to venture into and fight in Mexico.  Like the UFW, the IWW focused much of its work on organizing agricultural workers in the early 1900s.  The union set up the Agricultural Workers Organization to organize migrant farm workers in every kind of farm imaginable.  In Washington State, the IWW organized in the fields, docks, and timber industry.  The union was greatly suppressed by the US government but in recent years has had a comeback, organizing the unorganized in New York City food warehouses and with unions like the Starbucks Workers Union and the Jimmy Johns Workers Union.

There is hope that these farm workers, with no history of organization, may find victory in their struggle, much like the UFW at Chateau Ste. Michelle Winery.  Their Oaxacan native son, Ricardo Flores Magón, had this to say about the conditions of Oaxacans and other Mexicans in 1910.

While the poor acquiesce to being poor, while the oppressed acquiesce to being slaves there will be no liberty, there will be no progress.  But when discord tempts the hearts of the humble, when it comes and tells them that while they suffer their masters rejoice, and that we all have a right to rejoice and to live, the passions then blaze and they destroy and create at the same time, ravage and cultivate, demolish and build.  Blessed be discord!

The hearts of the humble of Familias Unidas Para la Justicia at Sakuma Brothers Farms are attempting to demolish the dismal conditions of their labor.  In doing this they are cultivating a newer and more democratic form of work through their strike.  "Viva la Huelga!" is the call of the hour.  And although victory currently hangs in the balance, there is much the labor movement can learn from these striking workers and the long tradition of struggle they come from in Oaxaca.

How You Can Help

Donate to the Workers Strike Fund!

Get the word out that Sakuma is not willing to support workers!  Call the farm at 360.757.6611 and urge them to change their practices and support the current farm worker rights committee!

Brendan Maslauskas Dunn has written for the Industrial Worker, Works in Progress, Utica Phoenix, and Le Monde Diplomatique. He is a member of the IWW and is active with Occupy Utica.